Please ensure Javascript is enabled for purposes of website accessibility
Log In Help Join The Motley Fool
Free Article Join Over 1 Million Premium Members And Get More In-Depth Stock Guidance and Research
By Robert Izquierdo - Jun 29, 2021 at 8:00AM

Both ad tech firms are growing, but one holds the edge as the superior investment.

Advertising technology companies The Trade Desk (TTD 1.24%) and Magnite (MGNI 1.14%) are operating on opposite sides of the same coin. The former supports advertisers looking to place digital ads. The latter services publishers, the owners of websites, and other digital content where ads appear.

Both firms stand to benefit from rising advertising spending. Forecasts predict global digital ad spending to increase from last year's $378.2 billion to $645.8 billion by 2024. This industry growth suggests an investment in The Trade Desk or Magnite can have an upside.

But one makes for a better investment choice. Let's examine each to understand why. 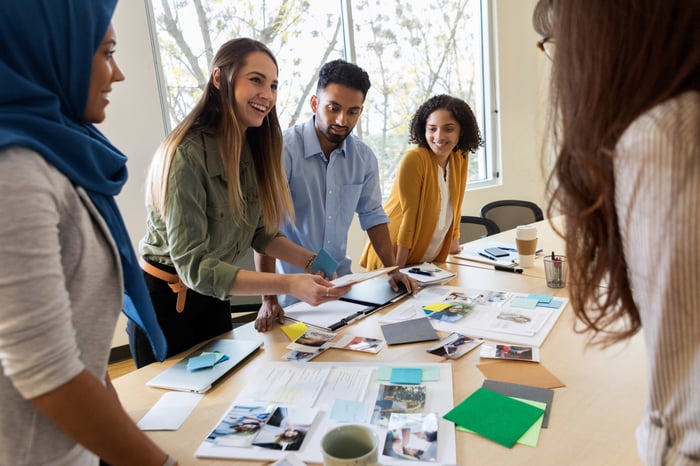 The Trade Desk provides advertisers with a software platform simplifying the ad buying and management process. The company charges fees for its solutions, and this model is working well. 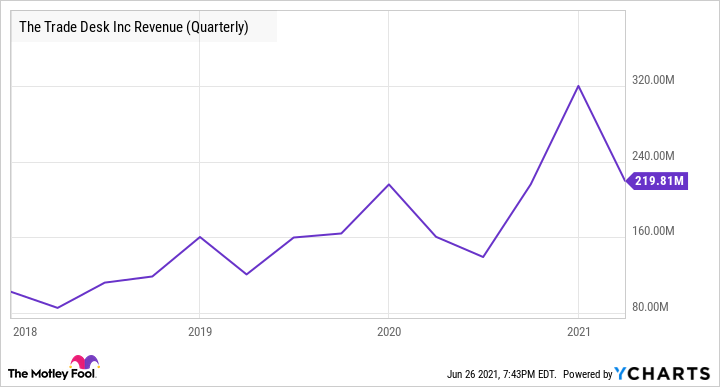 A key driver of this revenue growth is connected TV (CTV). The pandemic-induced increase in online activities accelerated cord-cutting. Many consumers turned to streaming video as an entertainment choice with theaters and other in-person options closed last year.

With greater consumer adoption of streaming video, more ad dollars are moving into connected TV. By 2024, CTV ad spend is estimated at $24.8 billion, a considerable step up from last year's $9 billion. That growth means CTV will remain a significant revenue component for The Trade Desk over several years.

The company isn't relying only on industry growth. The Trade Desk will launch a substantial upgrade to its ad platform in July, strengthening its value proposition to clients. The new features promise simplified workflows for its users through new automation capabilities, and methods for using data to improve decision-making.

Magnite, like The Trade Desk, offers a software platform for digital advertising, and charges fees for this service. But Magnite focuses on the publishers of digital content, giving them the ability to monetize that content by selling ad space to advertisers. Since Magnite services sellers and The Trade Desk does the same for buyers, naturally, these two firms are partners.

I admit a fondness for Magnite. Many of my former colleagues in the ad technology space worked there, and they built a quality business. It shows in Magnite's performance. 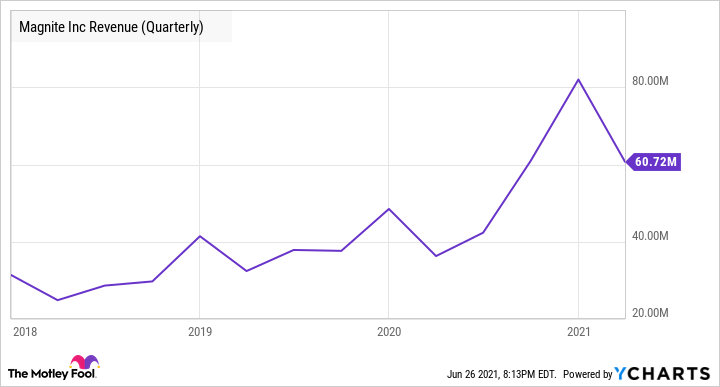 The parallels don't stop there. Just like The Trade Desk, CTV leads Magnite's revenue growth. The importance of CTV to its business led it to acquire SpotX, a leading digital video ad platform, in April. The acquisition allowed Magnite to more than double the size of its CTV business.

The strong growth in digital advertising over the coming years, and within CTV in particular, acts as a tailwind for both The Trade Desk and Magnite. But if I had to invest in just one, the edge goes to The Trade Desk.

A key difference between The Trade Desk and Magnite lies in their profitability. While The Trade Desk is profitable, posting $22.6 million in first-quarter net income, Magnite suffered a net loss of $12.9 million. In fact, the two companies are currently going in opposite directions in terms of net income. 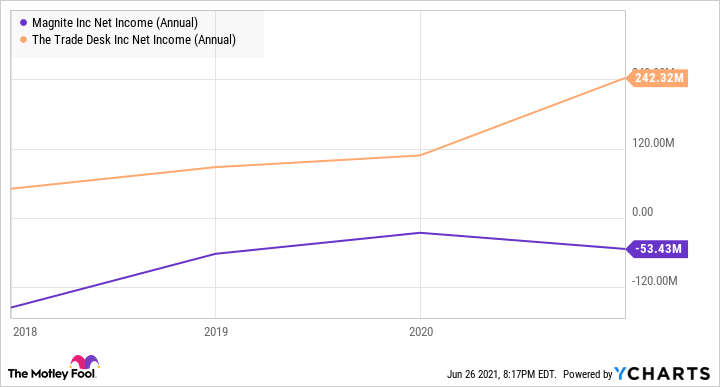 Magnite's net loss isn't necessarily a red flag. Many companies in the tech sector are not profitable as income is poured into fueling growth. But while The Trade Desk has zero debt, Magnite took on debt of $388.6 million to help fund its SpotX purchase.

Also, The Trade Desk recently underwent a 10-for-1 stock split, underscoring the company's conviction in its future. As CEO Jeff Green said about the decision to split its stock, the management team is "confident in our future growth prospects."

These factors make The Trade Desk the better investment choice in this matchup of ad tech titans.