Please ensure Javascript is enabled for purposes of website accessibility
Log In Help Join The Motley Fool
Free Article Join Over 1 Million Premium Members And Get More In-Depth Stock Guidance and Research
By Leo Sun - Jun 29, 2021 at 11:22AM

The IT services giant remains the best house in a boring neighborhood.

Accenture's (ACN 0.19%) stock price recently hit an all-time high after the company released its third-quarter earnings report. The IT services giant's revenue rose 21% year over year (16% in constant currency terms) to $13.3 billion, beating estimates by $450 million. Its EPS grew 26% to $2.40, which also topped expectations by $0.16.

Accenture also raised its guidance for the full year. It now expects its revenue to grow 10%-11% in local currency terms, compared to its prior forecast for 6.5%-8.5% growth, and for its EPS to rise 15%-16%, compared to its earlier expectations for 10%-12% growth.

Those healthy guidance growth rates reinforce my recent selection of Accenture as a tech stock that investors can hold forever. Today, I'll point out that growth as well as four additional reasons to consider buying it as a long-term investment. 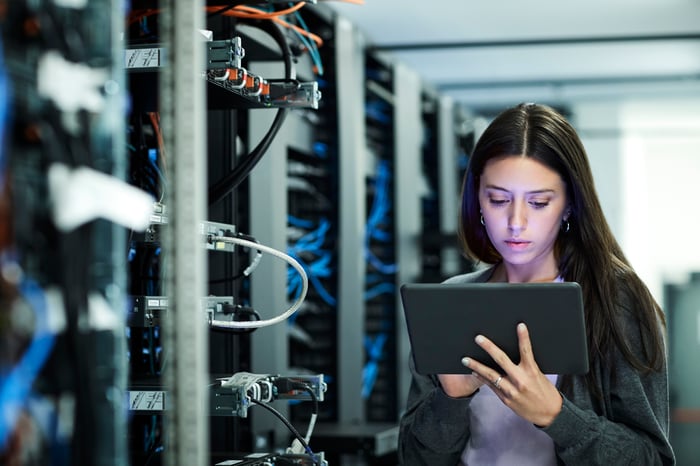 The pandemic disrupted most of those sectors last year, with only its health and public services segment -- which couldn't afford disruptions during that critical period -- staying resilient. However, its other segments gradually recovered, and each one generated accelerating revenue growth in the third quarter:

That recovery indicates there's still robust long-term demand for Accenture's services. Companies will keep hiring its IT specialists to connect their systems to public cloud platforms, install cybersecurity software, and execute "Industry X" digital transformations across their supply chains, websites, and mobile apps. They could also outsource their own IT operations to Accenture's overseas employees to cut costs.

To stay ahead of other IT services giants like IBM (IBM 0.47%) and SAP (SAP -0.64%), Accenture prioritizes the growth of its "strategic priorities" across the cloud, interactive, industry X, and security markets. It noted all four segments generated "very strong double-digit growth" during the third quarter.

The expansion of those newer businesses could widen Accenture's moat against companies like Globant (GLOB -0.08%), a smaller IT services company that specializes in digital transformation initiatives.

Accenture's operating margin expanded year over year and sequentially to 16% during the quarter. It also generated $2.2 billion in free cash flow (FCF), which comfortably covered its $835 million in buybacks and $559 million in dividend payments.

Accenture partly attributed its margin expansion to lower travel costs during the pandemic, but CFO KC McClure still anticipates a "modest margin expansion" next year after it laps those tailwinds.

4. It's still growing, both organically and inorganically

Accenture returns lots of its cash to its shareholders, but it continues to pour billions of dollars into investments and acquisitions to expand its ecosystem. It plans to spend $4 billion in acquisitions for the full year, and that doesn't even include its recently announced purchase of Umlaut -- which will expand its Industry X business after closing in fiscal 2022.

Accenture's bold inorganic expansion represents a stark contrast to other IT giants like IBM, which will spin off its slower-growth managed IT services business later this year, and SAP, which is also trying to streamline its business with divestments and spin-offs.

5. A rising dividend and a reasonable valuation

Accenture starting paying dividends in fiscal 2006, and it's raised its payout every year for a decade. It currently pays a forward yield of 1.2%, and its robust FCF growth gives it plenty of room for future hikes.

Accenture's stock might look pricey at 30 times forward earnings, especially when IBM and SAP have much lower forward P/E ratios of 12 and 23, respectively. However, I believe Accenture's aforementioned strengths easily justify its higher valuation, and it should remain the best house in the boring neighborhood of IT companies for years to come.