Please ensure Javascript is enabled for purposes of website accessibility
Log In Help Join The Motley Fool
Free Article Join Over 1 Million Premium Members And Get More In-Depth Stock Guidance and Research
By Leo Sun - Jun 26, 2021 at 6:17AM

These three evergreen tech stocks should easily ride out the next recession.

In his timeless investing guide One Up on Wall Street, Peter Lynch told investors that if they planned to hold a stock "forever", they should see how it fared during previous recessions and market downturns.

Past performance never guarantees future returns, but a look back at a stock's history can mentally prepare an investor for the next market crash. All too often, investors claim they'll hold a stock forever -- only to panic and sell once the market loses its balance. 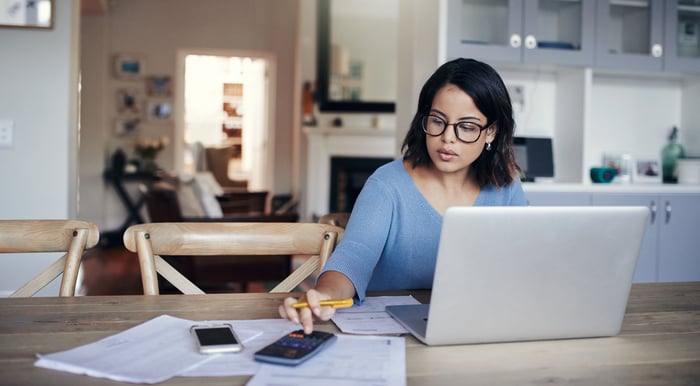 I recently highlighted three stocks I own and plan to hold forever: Disney, Amazon, and ASML. Those three companies dominate their respective markets, generate plenty of cash, and will likely continue growing for decades to come. But today, I'll highlight three other stocks I don't own yet -- and why I'm considering adding them to my basket of "forever" investments.

Alphabet (GOOG -0.55%) (GOOGL -0.61%), the parent company of Google, dominates several key tech markets. Google is the world's leading search engine, Android is the most popular mobile operating system, Chrome is the top web browser, Gmail is the leading email platform, and YouTube is the largest streaming video platform with over two billion users.

Alphabet generates most of its revenue from Google's digital ads, and it holds a near-duopoly in that booming sector with Facebook in the U.S. and many other markets. It also owns the world's third-largest cloud infrastructure platform after Amazon Web Services (AWS) and Microsoft's Azure.

But that's not all. Alphabet is also investing in driverless cars via its Waymo unit, while its Calico and Verily divisions are dabbling in the life sciences. In other words, Alphabet's stock represents a great way to simultaneously invest in multiple secular growth trends across the tech sector.

If we look back at Alphabet's stock price over the past 15 years, we'll see how little the financial crisis, its exit from mainland China in 2010, regulatory challenges, and the COVID-19 recession temporarily hurt its stock. 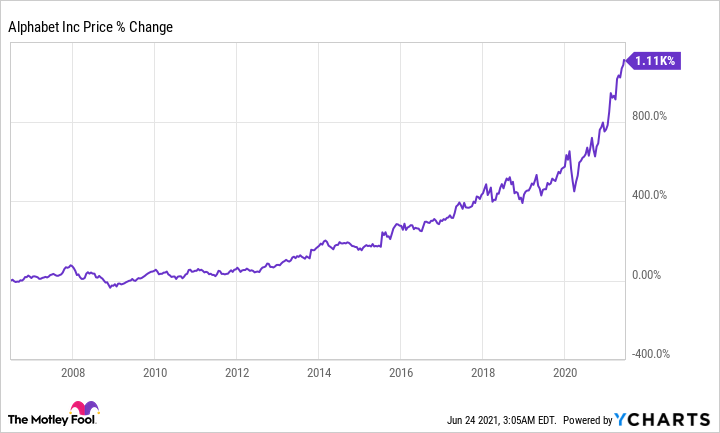 Between 2010 and 2020, Alphabet's annual revenue rose from $29.3 billion to $182.5 billion. Its net income soared from $8.5 billion to $40.3 billion. That growth, which was mainly driven by healthy demand for its targeted ads, drove its stock to fresh highs even as it faced macro headwinds.

Alphabet might not replicate those explosive gains over the next decade, but I believe its core businesses will keep growing as its stock outperforms the broader market.

Accenture (ACN -0.41%) is often dismissed as a slow-growth IT services company. But if we factor in reinvested dividends, Accenture actually outperformed Alphabet -- which doesn't pay a dividend -- with its total return over the past 15 years. 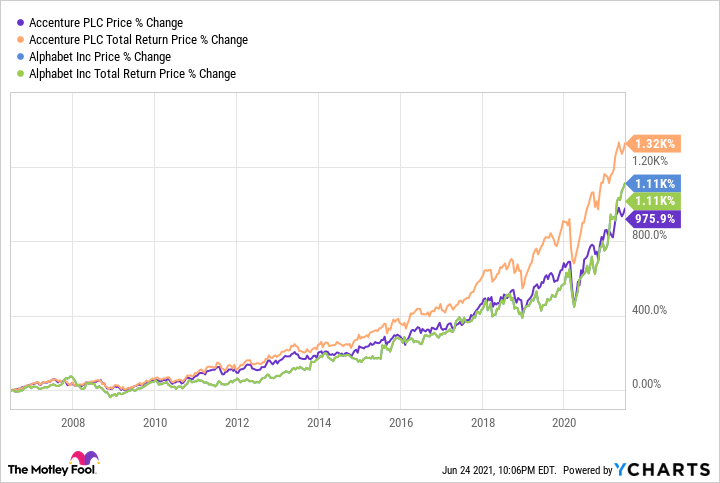 Accenture's sales growth was supported by three strategies. First, it acquired dozens of smaller companies to grow its workforce, expand its ecosystem with new services, and boost its revenue.

Second, it locked in larger customers that relied on outsourced IT services as they expanded. Today, Accenture serves more than three-quarters of the Fortune Global 500. It's well diversified across a wide range of sectors, which insulates it from cyclical downturns in specific industries.

All those strengths could support Accenture's growth over the next few decades as big companies expand their infrastructure and digitize their operations.

Eight years ago, Adobe (ADBE 0.66%) made a bold choice: it would transform all of its desktop software into subscription-based cloud services. Many investors initially scoffed at the decision, since it would squeeze its margins, but it turned Adobe into a high-growth stock again. Over the past 15 years, its stock rose 1,790% and delivered even bigger gains than Alphabet and Accenture.

Adobe's cloud-based transformation paid off because its Creative apps -- such as Photoshop, Illustrator, and Premiere Pro -- were indispensable tools for many industries. Serving them up as cloud-based services locked in customers with annual contracts, which generated stable recurring revenue, and kept everyone on the same page with online updates.

Adobe also provided cloud-based advertising, marketing, analytics, and e-commerce services to enterprise customers. It expanded this ecosystem, which competes against companies like Salesforce and Shopify, with dozens of acquisitions.

Adobe remains a great long-term buy for three reasons: Its ecosystem is sticky, it's resistant to economic downturns, and it's reasonably valued. Its flagship Creative products will continue to lead their respective markets, while its enterprise-oriented cloud services will profit from the same digitization trends that support Alphabet and Accenture's long-term growth.