Please ensure Javascript is enabled for purposes of website accessibility
Log In Help Join The Motley Fool
Free Article Join Over 1 Million Premium Members And Get More In-Depth Stock Guidance and Research
By Leo Sun - Jun 23, 2021 at 8:30AM

Adobe System's (ADBE 0.66%) stock recently hit an all-time high after the company released its second-quarter earnings report. The cloud-based software company's revenue rose 23% year over year to $3.84 billion, beating estimates by $110 million. Its adjusted net income also increased 23% to $1.46 billion, or $3.03 per share, which surpassed expectations by $0.21 a share.

Those headline numbers were impressive and the stock price reflects that, but it's still not too late to buy Adobe, for three simple reasons. 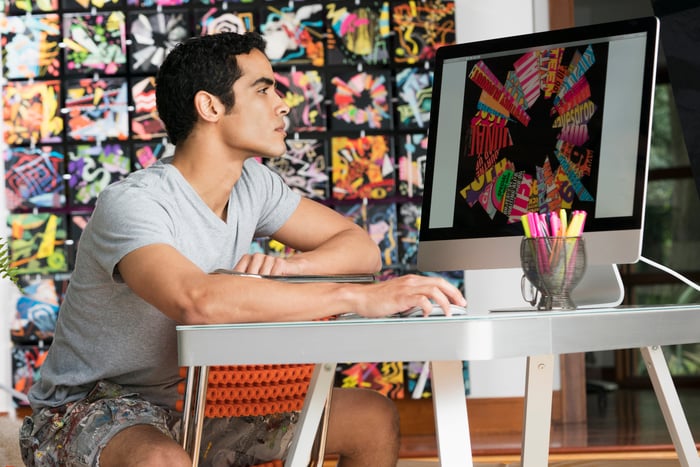 1. Adobe has a sticky ecosystem of industry-leading software

Adobe's Digital Media revenue rose 25% year over year to $2.79 billion during the quarter.

This segment generates most of its revenue from the Creative Cloud segment, which houses Photoshop, Illustrator, Premiere Pro, and other apps as cloud-based subscription services.

It also includes the Document Cloud, which hosts Adobe Acrobat and its e-signature service Adobe Sign. Here's how those two segments fared in 2020 and the first half of 2021.

Adobe's Digital Media business remained resilient throughout the pandemic for two reasons. First, it locks in its users with annual subscriptions, which can't be canceled without incurring termination fees.

Second, most of its software -- including Photoshop and Premier Pro -- dominate their respective markets as industry-standard digital tools. That reputation grants it pricing power during economic downturns.

Adobe expects its Digital Media revenue to rise 22% year over year in the third quarter and 22% for the full year. That stable growth indicates Adobe's multi-year transformation of its desktop software into cloud-based services paid off.

Adobe's Digital Experience platform provides other cloud-based services, including analytics and e-commerce tools, to enterprise customers. It also previously housed Adobe's Advertising Cloud, which was shifted to the new Publishing and Advertising segment in the fourth quarter of 2020.

Its Digital Experience revenue rose 21% year over year to $938 million during the second quarter. But the segment slightly benefited from the removal of its advertising cloud business -- which struggled with sluggish ad sales throughout the pandemic -- over the past two quarters.

The new Publishing & Advertising business remained weak in the second quarter, but it generated just 3% of Adobe's total revenue. Therefore, Adobe can easily offset its future challenges with the growth of its other businesses.

Adobe expects its Digital Experience revenue to rise another 21% year over year in the third quarter, and grow roughly 20% for the full year.

Those forecasts indicate Adobe will continue to benefit from the digitization of businesses worldwide. It's the same secular tailwind that buoyed shares of salesforce (CRM -0.57%) and Shopify (SHOP -0.51%) -- which both compete against parts of Adobe's Digital Experience platform -- throughout the pandemic.

3. Adobe has predictable growth at a reasonable valuation

Those valuations are high, but I believe Adobe's predictable double-digit percentage revenue and earnings growth, sticky ecosystem, and a wide moat all justify that premium. It's also consistently repurchased its shares as its stock price has risen over the past few years: 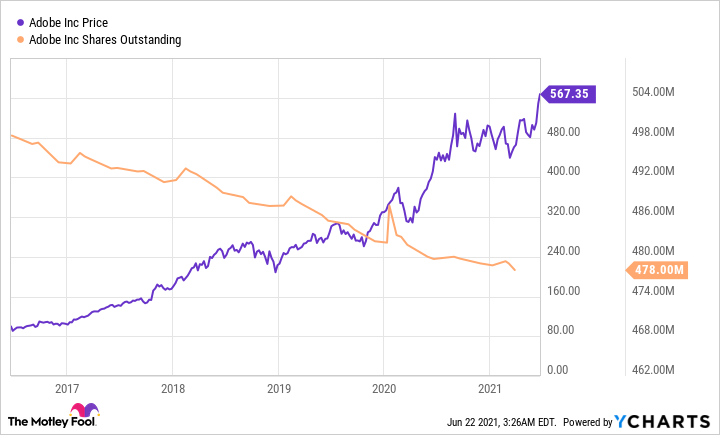 Adobe's insiders have also purchased more than twice as many shares as they sold over the past six months. That confidence suggests the stock could still be cheap relative to its long-term growth potential.

The right kind of tech stock for a fickle market

The past few months were rough for "hyper growth" tech stocks that hit sky-high valuations during the pandemic. Investors rotated out of growth stocks to value stocks, partly due to concerns about rising bond yields and inflation, and many of the market's favorite tech stocks lost their luster.

But the market was kinder to mature tech companies that offered predictable returns, stable profits, and reasonable valuations. As a stock that checks all three boxes, Adobe is still a great stock to buy in this fickle market.