Please ensure Javascript is enabled for purposes of website accessibility
Log In Help Join The Motley Fool
Free Article Join Over 1 Million Premium Members And Get More In-Depth Stock Guidance and Research
By Alex Carchidi - Jun 29, 2021 at 7:19AM

Things are looking bleak right now, but they might improve with enough time.

When most of a company's eggs are in one basket, it's entirely reasonable to want to sell your shares if you find out there's a big hole in the bottom.

Such is the case with CureVac (CVAC -5.16%) in light of its most recent coronavirus vaccine trial. The latest data readout from the trial was a total catastrophe, and the stock plummeted as a result. The company probably isn't finished, but investors should probably steer clear for the foreseeable future -- unless they're interested in taking a risk by bucking the trend, that is. 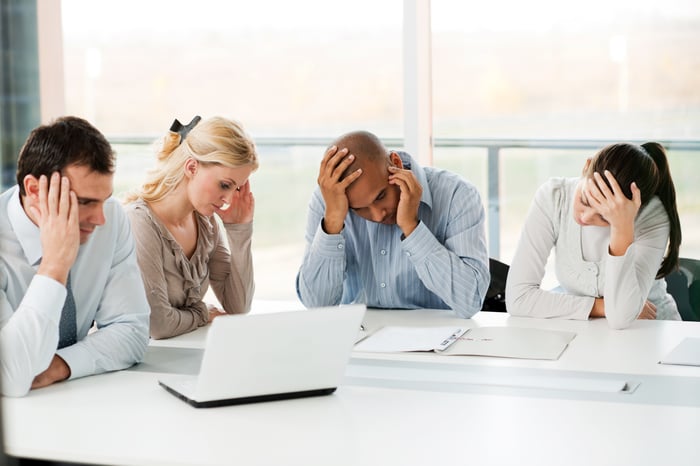 On June 16, CureVac dolefully reported that its massive phase 2 clinical trial had shown that its candidate was only 47% effective against coronaviral infections of any severity. In other words, the trial was a complete failure. Management blames the vaccine's ineffectiveness on the high number of viral variants that weren't around when it was being developed. While the data appear to support this conclusion -- only one of the vaccinated patients got sick with the original coronavirus strain -- it isn't the whole story. The company's analysis of the trial also indicated that people over age 60 probably didn't get much benefit from the jab.

More importantly, CureVac's competitors that are already selling their vaccines at scale don't suffer from any of the same issues. Products from Moderna and Pfizer appear to be effective against the viral variants, and they seem to work just fine for older people. Plus, both the Moderna and the Pfizer inoculations are based on mRNA technology, just like CureVac's candidate. So, it's probable that the nuances of the company's approach are responsible for the candidate's poor performance. 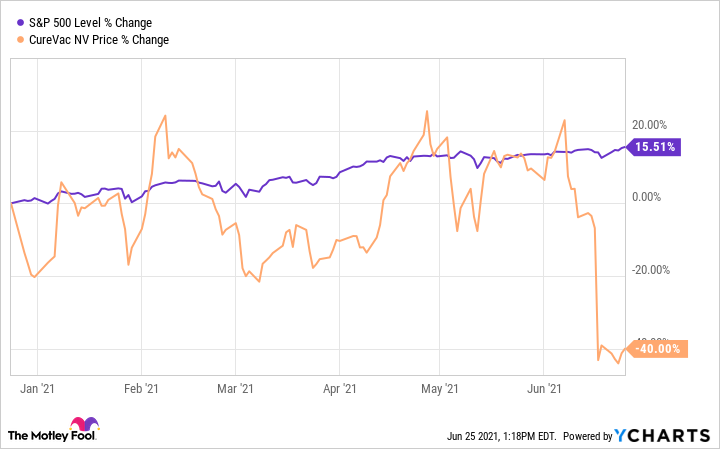 There could be light at the end of the tunnel

As damaging as the vaccine failure was for investors, CureVac's stock isn't fated to keep falling.

The company will shift its efforts to focus on its second-generation candidate being developed in conjunction with GlaxoSmithKline, which it hopes will be more effective against the circulating viral variants. In preclinical studies with rats, the jab appears to be effective against the viral variants that stymied CureVac's first attempt. Still, the newer project won't enter clinical trials until sometime in the third quarter, which puts its potential release well into 2022, assuming that it can continue to succeed where the other candidate failed.

In 2022, it's entirely possible that the demand for coronavirus vaccines will be much lower than it is currently. Alternatively, different viral variants could be more common, so the new candidate might have similar issues as before. Either way, CureVac will need to show that its jab will be effective in older people well in advance of it hitting the market to have a chance against the competition. And if one thing's certain, the company will have even more competition by then, so it'll be harder to win market share in such a crowded field.

Investors can take solace in two of the company's other projects, both of which are immunotherapies for cancer in phase 1 of clinical trials. One of the programs, CV8102, could eventually be used to treat several different malignancies, including squamous cell skin cancer, melanoma, and head and neck cancers. The other, BI1361849, is aimed at treating non-small cell lung cancer. Though it'll be quite some time before either of these drugs might be ready for regulatory approval, they could be the goldmines that the unprofitable company badly needs.

So, assuming that CureVac's stock has already priced in the coronavirus vaccine debacle, the coming months and years have a few potential catalysts on the calendar already. That means the stock could be an attractive purchase for investors willing to go against the market's recent pessimistic sentiment.

Nonetheless, it's critical to keep CureVac's prospects in context. Whereas a month ago CureVac was a company potentially on the verge of coming out with an in-demand vaccine, it's now an early-stage biotech once again. There's no guarantee that its second-generation jab or its immuno-oncology projects will bear fruit, and the risks of investing are as high as ever.

At this point in time, there are definitely better places to invest.