Please ensure Javascript is enabled for purposes of website accessibility
Log In Help Join The Motley Fool
Free Article Join Over 1 Million Premium Members And Get More In-Depth Stock Guidance and Research
By Jason Hawthorne - Jun 30, 2021 at 6:20AM

Shares of Moderna (MRNA -5.93%) and BioNTech (BNTX -5.19%) are up about 80% and 100% since the beginning of April, respectively. Much of that climb has been on the assumption that people receiving their gene-based vaccines would need annual booster shots. It was supposed to generate billions more in revenue and create a financial bridge to drugs for other diseases.

It's often a mistake to take anything about the future for granted. That's especially true when it comes to investing. Here are three reasons shareholders could be in for an unwelcome surprise with regard to the potential for vaccine boosters. They add up to a big risk the recent gains could evaporate. 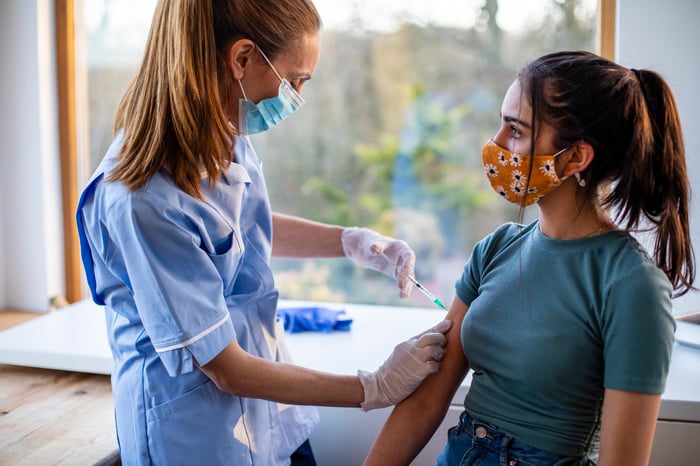 1. The CDC is not yet advising boosters

Last week, an advisory panel of the U.S. Centers for Disease Control and Prevention (CDC) concluded that the evidence for booster shots doesn't yet exist. The group -- which also outlined the extremely rare risk of heart complications in those vaccinated -- did say it would continue monitoring the evidence.

It's a wake-up call for investors who have been following the guidance of the CEOs involved. Stéphane Bancel of Moderna has been saying since the end of April that boosters would be needed in the fall. Just this past weekend, he reiterated that the market for boosters was even bigger than he originally thought.

Although Pfizer (PFE -1.18%) CEO Albert Bourla has been vocal about boosters, the head of his partner, BioNTech, has been more conservative. On the company's first-quarter earnings call, Uğur Şahin said he was confident that boosters would be needed but wouldn't comment on the timing.

The company's chief medical officer reiterated the uncertainty, saying the additional shots would be of value, but the timing and rollout were up to regulatory authorities. This blunt avoidance of non-scientific issues -- and conservative statements -- continues to set the team at BioNTech apart from their more promotionally minded counterparts.

2. Immunity may actually last for years

A study released this week seems to back up the CDC's hesitancy. The peer-reviewed work focused on evidence of protection in the bodily fluids -- known as the humoral immune response -- of vaccinated individuals. The researchers examined both peripheral blood and secreting lymph nodes. The lymph nodes were of special interest. That's where the immune cells that are trained to identify and fight the virus reside over the long term.

It turns out, not only are those cells present 15 weeks after the initial dose of vaccination, but the specialized center for training the immune cells was still extremely active. The cells' ability to recognize the virus had not waned. Normally, these centers of defense are most active a week or two after vaccination and then fall off over time.

Although the study of lymph nodes was only in 14 people, the durable protection was consistent across all of those studied. This raises serious questions about the need for additional shots to maintain the body's defense against the SARS-CoV-2 virus. As the virus mutates, the immune cells that produce antibodies appear to be staying in shape to fight the new variants.

3. Only mutations will drive booster demand

At least one expert has reviewed the study and concluded that the need for boosters will come only after the virus mutates further, not from declining immunity. Although RNA viruses like SARS-CoV-2 tend to mutate a lot, coronaviruses don't change as quickly. Scientists have said the rate of change is about one-quarter the rate of HIV and about half that of influenza.

It might be happening slowly, but there is evidence that the virus is changing enough to affect vaccination efficacy. Comparing the mRNA vaccines' original 95% effectiveness versus infection data from the variants makes it clear. Global studies against the different strains of the virus have shown between 70% and 90% protection. It might be a significant drop, but it's apparently not enough yet in the eyes of the CDC to justify a booster shot.

So far, the stocks haven't reacted much to the news. Maybe Wall Street is counting on the spread of variants and the expectation of 90% protection to drive demand for boosters. It could be that investors are focused on the long-term potential of the mRNA platform and ignoring the shot-term uncertainty. Whatever the reason, the fall of 2021 will be the test. Based on the CDC's latest guidance, shareholders shouldn't be shocked if the number of booster doses ends up far short of analysts' expectations. If that happens, the optimism priced into the stocks will likely erode.