Please ensure Javascript is enabled for purposes of website accessibility
Log In Help Join The Motley Fool
Free Article Join Over 1 Million Premium Members And Get More In-Depth Stock Guidance and Research
By Bram Berkowitz - Jun 30, 2021 at 6:06AM

Following successful stress testing, banks will have much more autonomy to return capital to shareholders.

Everyone knew the dividend increases were coming, and the big banks did not disappoint.

After roughly a year of limitations on capital distributions, the Federal Reserve announced last week that all 23 banks participating in its annual stress testing could withstand a severe recession and still maintain strong capital levels. This cleared the way for them to announce a flurry of dividend increases on Monday evening, as well as a few select announcements regarding share repurchases.

Here are the big winners and losers.

Morgan Stanley (MS -0.51%) was the biggest winner in my eyes, doubling its quarterly dividend to $0.70 per share. At Tuesday's prices, that would give Morgan Stanley a dividend yield of roughly 3.1%, which is higher than most of its peers. The company also announced the authorization of a $12 billion stock repurchase plan through June 2022.

The bank has done a nice job over the years transitioning to more of a capital-light model that better balances its powerhouse investment bank and growing wealth and asset management divisions, buoyed by the acquisitions of E*Trade and investment management firm Eaton Vance.

Morgan Stanley has also built up lots of capital, with a 16.8% common equity tier 1 (CET1) capital ratio. The CET1 ratio is a measure of a bank's core capital expressed as a percentage of its risk-weighted assets. Banks specifically hold this capital for unexpected losses, and the amount of capital a bank holds determines how much capital it can ultimately return to shareholders. Following stress testing, Morgan Stanley's required CET1 ratio was 13.2%, leaving the bank with significant excess capital. 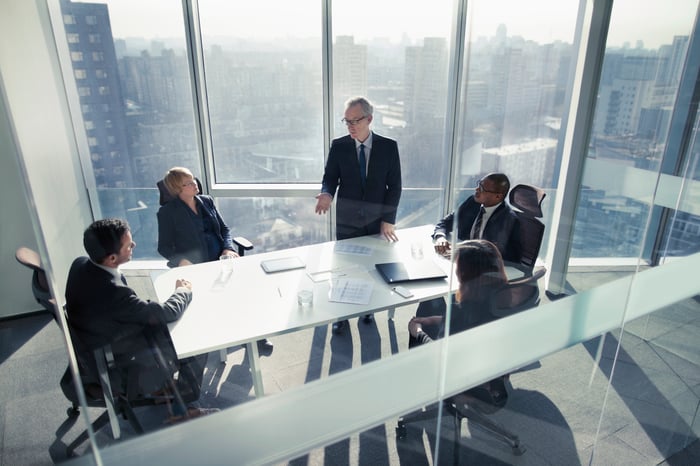 I see the next big winner as Wells Fargo (WFC 0.17%), which doubled its quarterly dividend to $0.20 per share, bringing the yield to roughly 1.8%. Wells Fargo also said it planned to repurchase $18 billion in shares between the third quarter of 2021 and the second quarter of 2022.

These are big increases, but Wells Fargo was forced to cut its dividend 80% last year due to Fed restrictions. Still, $0.20 was roughly how much I expected to see Wells Fargo raise its dividend this year, so I'm happy to see that the bank didn't come up short of my expectations.

Goldman Sachs (GS -0.35%) also followed with a big raise, hiking its quarterly common dividend from $1.25 per share to $2, bringing its dividend yield to roughly 2.2%. Bank of America (BAC -0.63%) increased its quarterly common dividend 17% to $0.21 per share, for a yield of roughly 2%. Many of the other large banks -- including JPMorgan Chase, The Bank of New York Mellon, State Street, US Bancorp, and PNC Financial Services Group -- announced quarterly dividend increases in the 9% to 11% range.

Bank of New York Mellon also announced a $6 billion share repurchase plan, while PNC announced it would reinstate its $2.9 billion share repurchase plan. I'd also like to highlight JPMorgan as a partial winner here, because the bank managed to bring down a layer in its required CET1 ratio called the stress capital buffer (SCB), which should slightly reduce its overall CET1 ratio.

The big loser here, in my opinion, is Citigroup (C -0.78%). It was the only major bank to announce that it will maintain its $0.51 common quarterly dividend and continue to conduct share repurchases, without specifying an amount.

It's not all bad. Citigroup will still have a dividend yield of roughly 2.9%, and the share repurchases are particularly useful for Citigroup right now because the bank has the opportunity to repurchase below tangible book value (equity minus goodwill and intangible assets). That is the best time for a bank to repurchase, because you can essentially purchase $1 of stock for less than $1. The result is a boost in tangible book value and earnings per share.

But it's part of somewhat disappointing stress-testing results for Citigroup, which will see its stress capital buffer rise from 2.5% to 3%, and its required CET1 ratio rise from 10% to 10.5%. Again, it could be worse, because the bank already has a target CET1 ratio of 11.5%, which it plans to maintain as its target.

Even though I see Wells Fargo and Goldman Sachs as winners due to their large dividend increases, I would also categorize them partly as losers because of stress-testing results. Wells Fargo, like Citigroup, saw its stress capital buffer rise from 2.5% to 3.1%, which means its required CET1 ratio will likely go up.

Goldman Sachs got its CET1 ratio requirement down from 13.6% to 13.4% starting in October, but that wasn't the progress shareholders were hoping for. Goldman earlier this year told investors it wants to manage its CET1 ratio between 13% to 13.5%, but that's hard to do when your required CET1 ratio is 13.4% because banks always manage that ratio above their requirement to account for uncertainty.

Banks came through with some nice dividend increases and share repurchase announcements, as expected, led by Morgan Stanley and Wells Fargo. But remember: Banks' capital requirements, mainly through the CET1 ratio, limit the amount of capital they can return. So, while seeing Wells Fargo and Goldman announce sizable increases is positive, seeing their capital requirements increase or stay roughly where they were last year is not what shareholders were hoping for.

Still, new capital requirements do not really alter the capital-return plans of Wells Fargo, Goldman Sachs, or even Citigroup too much, so I don't see that as a huge negative right now.