The media-streaming expert just put an Apple-sponsored button on its remote controls.

Shares of Roku (ROKU -6.78%) had a nice, quiet day for most of Wednesday's trading session. But then the stock suddenly shot up as much as 5.1% near 2 p.m. EDT, as investors caught wind of a significant revenue opportunity straight out of Cupertino, California.

Roku did not announce a new deal or partnership today, but the company did publish some updated pictures of the high-end Roku Ultra media-streaming device. The Ultra's new remote has replaced the Sling TV button found on older versions with a new shortcut directly to the Apple TV+ service. This way, Apple (AAPL 0.88%) joins fellow media-industry giants Netflix and Walt Disney on the Roku remote, presumably paying a handsome fee for this premium real estate. The Roku Ultra move is probably the start of updated remote buttons across the company's full portfolio of streaming devices and stand-alone remote upgrades. 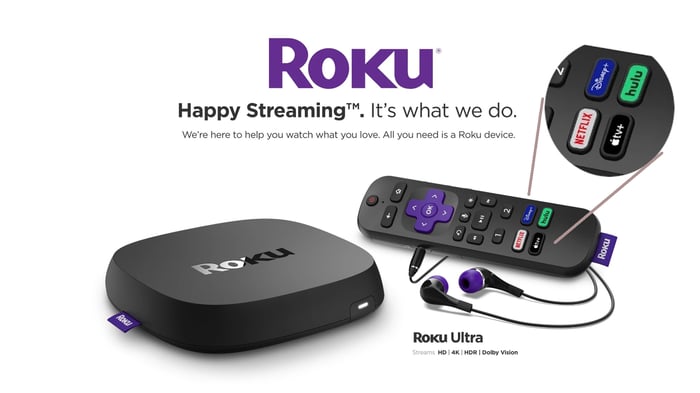 Giving Roku users easy access to a small handful of streaming platforms is a potentially game-changing move, and premium placement on Roku remotes has been a prominent Netflix marketing strategy for years. Apple could certainly use a boost to its ailing Apple TV+ service, which has been available in the Roku store since the fall of 2019 but hasn't delivered mind-blowing subscriber numbers so far. For Roku, Apple is replacing a heavily promoted but rarely used live-TV service from Dish Network. The Apple contract is likely to carry a larger fee than the old Sling TV deal, and that's why Roku investors are getting excited today. At the close, the stock was up 4.3%.