The Dow Jones Industrial Average (^DJI 1.27%) added 79 points as of 2:23 p.m. EDT on July 1, riding modest gains by Chevron (CVX 0.14%) as the global oil market continues to improve, and Nike (NKE 1.73%) following the release of its "Rawdacious" product line ahead of the 2020 Tokyo Olympics. In a day of modest gains for the majority of the 30 stocks in the Dow, Walgreens Boots Alliance (WBA 1.30%) shares are down almost 6% after the company reported earnings before market open today.

Crude oil prices are up today, with both Brent and West Texas Intermediate futures trading above $75 per barrel following news that OPEC+, the consortium of oil-producing countries that includes global giants Saudi Arabia and Russia, had reached a preliminary deal to raise oil production by 2 million barrels per day gradually across the second half of 2021.

As a result, West Texas crude oil prices are now at their highest levels in more than six years, while Brent, if recent prices hold, would be at its highest sustained price since crude prices were above $100 in 2014: 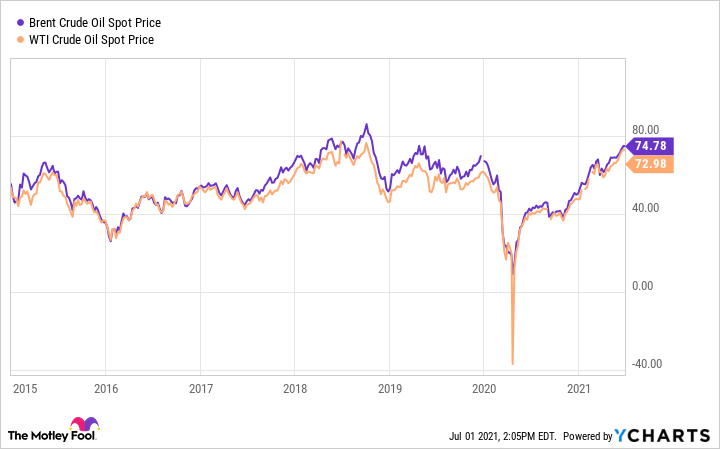 For Chevron, it's not just the higher sustained prices driving its stock price higher: It's as much about the improvements in underlying demand for oil as more of the world begins shifting into a post-coronavirus environment. Commerce and transportation activity has surged, driving global oil demand up sharply over the past year. And while it's still below 2019 levels, so far, the global oil giants have remained disciplined in their oil output, pushing prices higher and improving the prospects for Chevron and its peers. 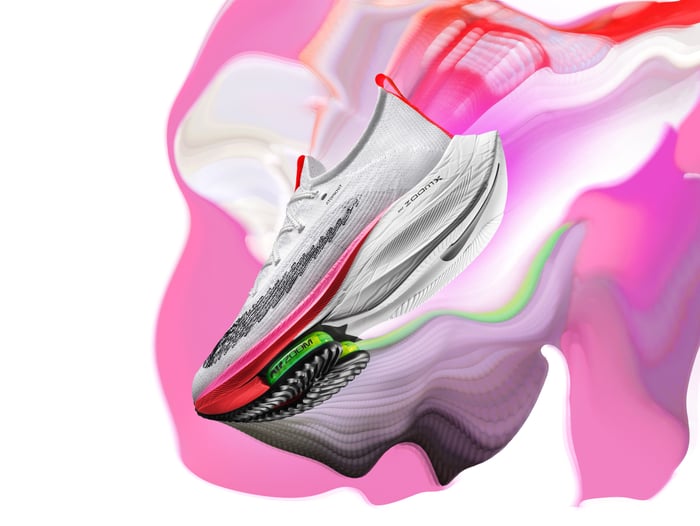 The king of athletic footwear and apparel released its newest product lineup on July 1, the "Rawdacious" colorway palette of running shoes for the Tokyo games. From the company's press release:

'Color has the nuanced ability to invite both reaction and reflection at once,' says Martha Moore, Nike VP, Central Color Product Design. 'You see a color, and you immediately react in a certain way. Color can also open the door to history, connections to other disciplines and to memory. In creating this year's palette, we worked to consider color holistically to best represent a moment in time.'

Nike plans to release both performance and lifestyle products featuring the Rawdacious colorway on the company's e-commerce website "throughout the summer."

Pharmacy giant Walgreens Boots Alliance reported its fiscal third-quarter results before market open on July 1, reversing last year's losses with earnings of $1.38 per share, ahead of investor's expectations. Revenue was up 12.1% to $34 billion, also coming in ahead of expectations.

So why the sell-off? It's most likely based on management's expectations for COVID-19 vaccine revenue, which is expected to have already peaked in the U.S., its biggest market. As a result, the company expects earnings growth rate will slow on a sequential basis as it earns less profit from administering vaccines than management initially expected earlier in the rollout. Sales of PPE, personal-protective equipment including masks and gloves, are also expected to fall versus the year-ago quarter.

Even with today's sell-off, Walgreens shares are still up over 24%, so it's possible some of the sell-off is just the usual "sell the news" of trading activity that ramps up during earnings season. Ironically, Walgreens actually increased its full-year earnings guidance, despite lower expectations for coronavirus-related revenue.

Looking longer-term, Walgreens management is still focused on key trends in healthcare, including digital health, healthcare plans, and meeting the health needs of a growing population of seniors.

As 2022 Begins, Investors Go on the Offensive