Please ensure Javascript is enabled for purposes of website accessibility
Log In Help Join The Motley Fool
Free Article Join Over 1 Million Premium Members And Get More In-Depth Stock Guidance and Research
By Leo Sun - Jul 9, 2021 at 7:40AM

A $4.4 billion IPO, a crackdown by Chinese regulators, major fines, class-action lawsuits. Quite a week for the "Uber of China."

Yet Didi's stock barely closed above its IPO price on the first day, then plummeted over the following week following several stunning developments. Let's see what happened to DiDi, why everyone is talking about its broken IPO, and what its failure could mean for other Chinese IPOs.

On July 2, the Cyberspace Administration of China (CAC) suspended all new user registrations for DiDi's app within China -- where it generated about 98% of its revenue last year -- as part of a "cybersecurity review." On July 4, DiDi admitted the CAC had ordered the removal of its app from all of China's mobile app stores, due to a "problem of collecting personal information in violation of relevant PRC laws and regulations." 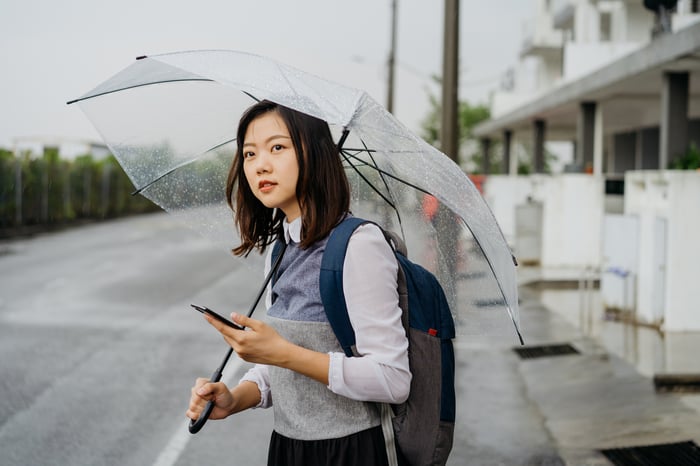 Didi's 377 million annual active users and 13 million annual active drivers in China can still access its app if they've already downloaded it, but the new restrictions will clearly cap the company's growth. DiDi didn't offer a timeline for the app's restoration and merely warned that the government's actions "may have an adverse impact on its revenue in China."

On July 7, China's State Administration for Market Regulation (SAMR) levied additional fines against DiDi and other tech companies over "irregularities" with their previous investments and acquisitions.

Meanwhile, a regulatory filing revealed that DiDi had gifted about $3 billion in stock options to its top executives right before its IPO. Out of the 66.7 million options granted, 63.5 million vested right away -- which means they can be sold immediately after DiDi's six-month lockup period ends.

To be fair, DiDi mentioned most of these risks in its F-1 filing. It warned that its business was "subject to numerous legal and regulatory risks that could have an adverse impact on our business and future prospects." It also warned that "new laws and regulations may be adopted from time to time to address new issues that come to the authorities' attention."

DiDi said it had been fined by China's SAMR for unapproved acquisitions, and additional antitrust actions could subject it to fines and changes to its business that could "damage" its reputation and throttle its growth. However, DiDi denied knowing anything about the CAC investigation prior to its IPO.

But the timing raises a lot of questions

DiDi might have warned U.S. investors about some of the regulatory risks, but going public before it sorted those issues raises red flags. The Wall Street Journal claims the CAC had asked DiDi to postpone its IPO in New York and conduct a review of its own network security, but it didn't issue an outright order. Since it would have been costly to postpone the IPO, DiDi moved ahead with its scheduled debut.

However, some analysts have also speculated that the CAC cracked down on DiDi in retaliation for listing its shares in the U.S. instead of a Chinese exchange. Another recent report claims Chinese regulators want to completely eliminate the VIE (variable interest entity) structure that allows Chinese companies to go public in the U.S. by listing shares of a holding company in a proxy country like the Cayman Islands.

Closing that loophole could end all Chinese IPOs in the U.S. and make other U.S.-listed Chinese stocks a lot less appealing -- especially as U.S. regulators get ready to delist Chinese companies that don't comply with new auditing standards within the next three years.

Is DiDi a canary in the coal mine?

Before all of this drama unfolded, I compared DiDi to Uber and concluded its stronger growth prospects and lower valuation made it a better buy. However, the events of the past week have turned that thesis upside down.

DiDi isn't doomed yet, but it definitely won't attract any buyers until its app suspension ends. Even if it restores its app, it still needs to contend with Chinese and U.S. regulators, who simply don't want American investors to own shares of Chinese tech companies. So for now, investors should simply forget about Chinese stocks and stick with other less controversial markets instead.