The first company to reach a fully autonomous, all-electric vehicle network would have the potential to upend the $2.5 trillion global transportation market, and big-time companies, from Alphabet's (NASDAQ:GOOG) (NASDAQ:GOOGL) Waymo to Tesla (NASDAQ:TSLA), are aiming to do just that.

Yet there appears to be a long way to go before that happens. Although industry enthusiasts had predicted not too long ago we'd all be riding around in self-driving cars now, progress has been much, much slower than hoped. A recent lawsuit against Tesla, alleging partial responsibility for a recent fatality while a Tesla was possibly on Autopilot, won't help the cause either.

Yet a new "autonomous" start-up called Halo, in combination with 5G leader T-Mobile (NASDAQ:TMUS) will be launching its own unique service in Las Vegas later this year. Halo's more incremental approach to self-driving is vastly different than the full Level 5 capabilities these auto behemoths are chasing -- and it may just be the one best-suited to transition drivers from traditional driving to a self-driving future. 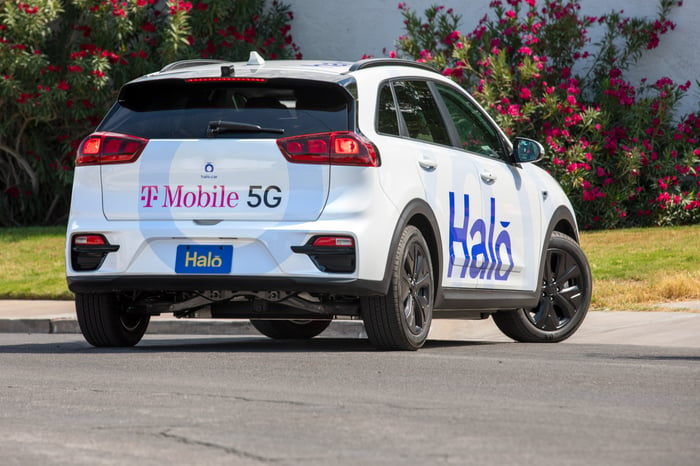 Halo is a network of electric vehicles consumers can summon via the Halo app. A driverless Halo vehicle arrives, controlled by a remote driver over T-Mobile's 5G network, to pick up the rider. The rider hops in, then drives his or herself wherever they want to go, and can leave the car without having to worry about parking. When not driven by customers, Halo vehicles are controlled by trained remote driver technicians using Halo's proprietary, camera-based RemotePilot technology.

Meanwhile, as Halo vehicles are driven, the company's AI algorithm "learns" as it racks up miles. Notably, Halo isn't using LiDAR, like Waymo, but rather a suite of cameras, radar, and ultrasonics. It's actually a similar approach to Tesla, which is using video cameras on its existing fleet to gather the data that informs its own full self-driving AI engine.

It's a nifty little mix of a ride-hailing platform that also lets customers drive their own cars, and it's a clever model that provides customers with a way to get comfortable with autonomy, without having to get into a driverless car, with all the perceived risks.

The 5G Open Innovation Lab was started last year as an open collaboration between T-Mobile, Intel, and NASA. Aside from those founding partners, other companies such as Microsoft and Dell Technologies have also joined.

The lab acts as a collaborative platform between leading 5G businesses, academia, and government institutions, to mentor the next generation of 5G-related start-ups in a 12-week educational program. The program has already gone through three batches of 15-17 start-ups, including last Spring and Fall and this Spring as well.

Notably, the aim of the lab appears to be to accelerate the adoption of 5G technology, and not necessarily for equity investments on the part of the above large public companies, although the innovation lab does provide access to venture capital investors. According to TechCrunch, Halo founder Anand Nandakumar declined to answer if T-Mobile was an investor in Halo.

Watch for accelerated 5G adoption in 2021

If it finds success in its Las Vegas launch later this year, Halo could very well be an interesting start-up to put on your radar. In the meantime, 2021 will be the year in which 5G technology really kicks off in earnest. The first 5G iPhones were only introduced last year, and 5G mid-band spectrum -- the band of spectrum that really provides a marked difference over 4G -- is only being rolled out in a significant way this year, and really only by T-Mobile in a significant way. T-Mobile projects it will cover 200 million Americans with mid-band 5G spectrum by the end of this year. That would give it about a two-year head start over rivals, according to New Street Research.

As "reopening trades" become fully valued, investors should keep an eye out for the next catalyst for stocks. These are likely to come from next-gen technologies coming into their own, such as 5G. Not only will these new technologies be the arena of new start-ups, SPACs, and IPOs, but they could also benefit the more mature companies like T-Mobile and others mentioned above.