Spirit Airlines (NYSE:SAVE) is the only major airline based in Florida, and for many years, carrying leisure travelers to and from Florida has been a big part of its strategy. That focus on Florida has proved to be a double-edged sword over the past year. However, the supply demand balance could be much more favorable in 2022. As a result, Spirit continues to bet on Florida to power much of its near-term growth.

Leisure demand has bounced back from the COVID-19 pandemic extremely quickly. Florida has driven much of that recovery. Between the state's warm weather, its abundant options for outdoor activities, and its early economic reopening, tourists have flocked to the Sunshine State this year.

This surge in demand has helped airlines with big operations in Florida. However, with most other markets recovering at a much slower pace, U.S. airlines have flooded Florida routes with capacity to make up for deep cuts elsewhere. Summer seat capacity is up by 50% or more at several major Florida airports.

Unsurprisingly, all this extra capacity has weighed on fares. On balance, leisure airlines with a heavy concentration of flights in Florida (like Spirit) have been better off than those focused on business travel or regions where demand has recovered comparatively slowly. Indeed, Spirit Airlines raised its guidance last month, thanks to high demand. That said, the carrier is still on track to post a sizable loss for the second quarter. Preparing for a different environment in 2022

Whereas airlines have piled into Florida aggressively this year, 2022 is likely to look much different. Business travel demand has already started to recover in a meaningful way. That trend could accelerate in the months ahead if the pandemic remains under control in the U.S.

Meanwhile, with demand now bouncing back in markets that lagged during the initial stages of the air travel recovery, airlines are redeploying capacity back to their core markets. For example, JetBlue recently cut 27 underperforming routes as of this fall, 18 of which touched Florida.

Yet a combination of pent-up demand for travel and increased household savings rates during the pandemic should keep demand for flights to and from Florida strong next year. That creates an opportunity for Spirit Airlines to seize a bigger share of Florida travel without having to slash fares as much.

As a result, Spirit plans to grow aggressively in Florida. Last month, it began flying to a new destination in the state: Pensacola. Last Thursday, the airline announced that it was resuming all of its international routes from Orlando by November while adding eight new routes and increasing flight frequencies on others. In total, this will expand its operations in Orlando by 45% compared to late 2019. And on Friday, Spirit began selling tickets for 30 new routes out of Miami that will begin this fall. 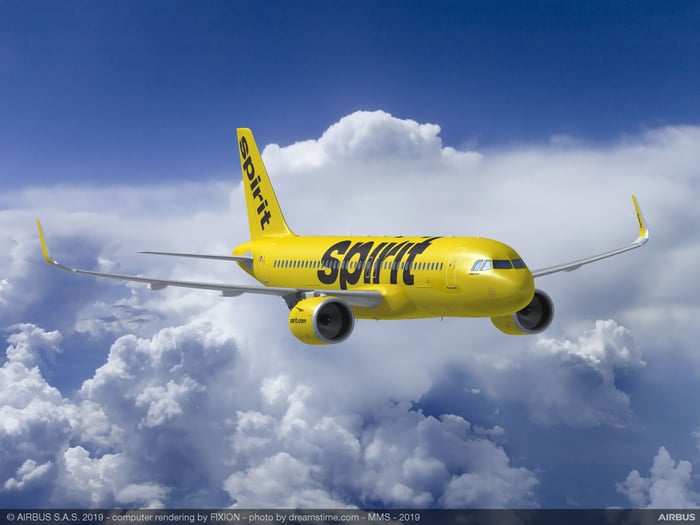 Spirit Airlines is also launching service to several new markets in the Northeast and Midwest this year, including Louisville, Milwaukee, St. Louis, and Manchester, New Hampshire. Nearly two-thirds of its routes from those cities will carry leisure customers to Florida.

Florida could power a big rebound for Spirit Airlines

Whereas many of its competitors shrank their fleets during the pandemic, Spirit Airlines has continued adding new Airbus aircraft. By the end of 2021, it will have 173 jets, up from 145 at the end of 2019. Furthermore, Spirit plans to grow its fleet to 194 aircraft next year.

In the short term, this fleet growth has hurt the company, as it has needed to reduce its aircraft utilization, driving up unit costs. But in 2022, Spirit Airlines expects to operate 29% to 34% more capacity than it did in 2019, roughly matching its fleet growth over that period. That should drive a big improvement in unit costs next year.

Spirit Airlines is also poised to generate stronger unit revenue in 2022, thanks to its growth in Florida and the more favorable supply demand balance emerging there. This paves the way for a big earnings recovery. With Spirit Airlines stock having pulled back by 30% since touching a 52-week high in March, this could be a great time to invest in this long-term growth story.