Please ensure Javascript is enabled for purposes of website accessibility
Log In Help Join The Motley Fool
Free Article Join Over 1 Million Premium Members And Get More In-Depth Stock Guidance and Research
By Catherine Brock - Jul 18, 2021 at 5:06AM

Staying invested is the easier and more reliable strategy.

Recessions can be tough on investors. A weak economy strains corporate profit-making, and share prices take a hit. You're left watching your portfolio decline in value, feeling powerless to stop it.

The stress of that could drive you to sell your stocks mid-recession, figuring that you can always buy them back when share prices start to rebound. If that sounds like a solid plan, you're in for an unpleasant surprise, because that strategy rarely plays out as investors hope. For most people, the right thing to do is hold onto your investments the whole way through a recession. Here are five reasons why.

1. You won't have to time your return to the market

The biggest challenge of selling your stocks to limit your losses when the economy goes south is deciding when to start investing again. 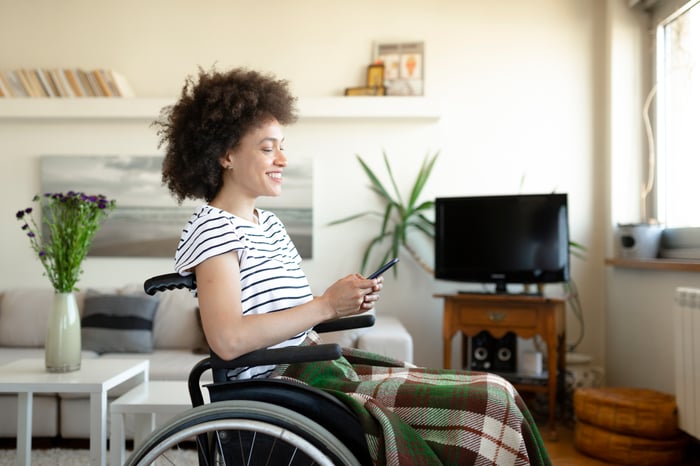 How do you expect to know when it's safe to move back into your stocks? When share prices start rising? If you've been through market down cycles before, you know that share prices can rise and fall dramatically throughout a recession -- such that a recovery in its early stages will look a lot like a continuation of the volatility. Even the experts can't pinpoint when a recovery actually started until some time has passed. And by the time the market's new direction is clear, some of the biggest recovery gains will already be in the books.

Here's what it comes down to. If you wait to buy back in until you're certain a recovery is underway, share prices may be higher than they were when you sold -- and selling low and buying high is not the formula for turning a profit.

An alternative strategy is to get back into the market before you're certain, but that's guesswork. And if you're going to guess, well, why bother selling at all? It's easier to leave your money invested and deal with some temporary uncertainty. That way, at least you'll be poised to benefit from recovery gains, whenever they may appear.

Although recessions and bear markets can happen at the same time, they are two different things. A recession is a decline in economic growth as measured by gross domestic product (GDP). A bear market is a period of falling stock prices, marked by a drop of 20% or more in the major market indexes.

When the economy slows, investors often assume corporate profits will also decline. That leads to falling stock prices. However, share prices can recover long before the recession ends because investors are an optimistic bunch. They'll often start bidding stocks up again when the economy looks like it's about to turn around. Market momentum can thus pick up before GDP numbers confirm a return to growth, and long before the National Bureau of Economic Research (NBER) declares that the recession has ended.

As an example, the stock market recouped the steep losses incurred in February and March of 2020 by midsummer. Meanwhile, the NBER still hasn't officially announced an end date for the 2020 recession, even though U.S. GDP has grown in recent quarters.

The mismatch between economic cycles and stock market cycles adds more confusion to the question of when to start investing again. If your plan is to buy back your stocks after the recession ends, you'll likely miss a large fraction of the rebound's share price gains. But if you stay invested throughout, you don't have to worry about it.

3. You will avoid realizing losses

Recessions don't last forever. If a recession is pushing your share prices down, that's a temporary issue -- if you hold onto your investments. Selling makes the loss permanent.

Respect the difference between unrealized and realized losses. You can own stock that's currently worth less than what you paid for it. That's an unrealized loss, meaning you'd lose money if you sold the stock right now. But tomorrow, the share price may rise again, turning your unrealized loss into an unrealized gain.

Once you sell, your unrealized position becomes a realized one. If you sell for less than you paid, you book a loss. The share price could still rise the next day, but you won't benefit.

Realizing a loss isn't always a bad thing. You might choose to accept a loss on an investment that no longer suits your needs, or if your investment thesis for buying that company in the first place no longer applies. Or, you might take a loss for tax reasons. But think carefully before you choose to take a loss on a quality stock during a recession. You'll kick yourself if the share price rebounds and you end up buying it back later at a higher price.

4. You will benefit from recovery gains

The U.S. stock market has a history of putting up some of its best daily performances shortly after crashes and corrections. Take a look at the chart below, showing the Dow Jones Industrial Average (^DJI 1.27%) through the coronavirus crash of 2020. 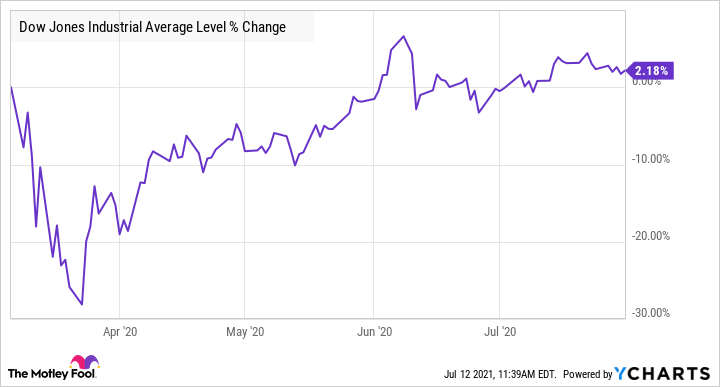 This second chart shows the Dow during the Great Recession. 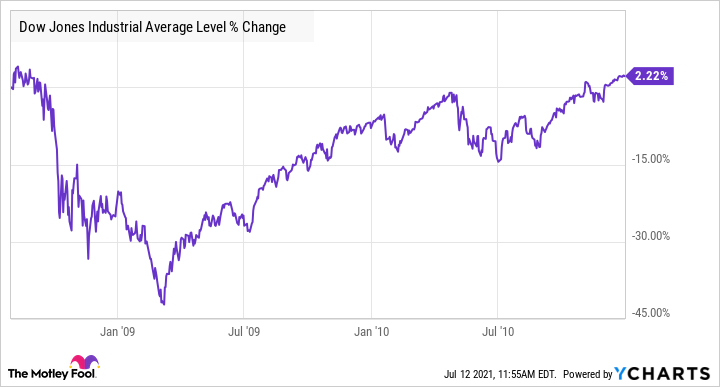 While this recovery took longer than the 2020 recovery, it shows a similar pattern -- steep drops followed by sharp gains. Those continue but get less dramatic over time. Mentally, draw a straight line between the low point in March 2009 to the end of 2010. That trend line would show growth, even though it presented itself as a series of gains and losses.

5. You have an emergency fund

There will always come times when you need large quantities of extra cash. You could lose your job, wreck your car, or get injured playing an impromptu game of beach volleyball. If your investment portfolio is only the source you can tap for the funds you need, you may not have the luxury of waiting to sell stocks until a recession or bear market has ended.

You can hedge against this scenario by keeping a cash emergency fund. How much you stash in it is up to you. An amount sufficient to cover three to six months of living expenses should protect you in case of a job loss. Or, you could stash enough to cover your insurance deductibles for health, auto, and homeowners coverage.

Selling your investments in a recession will prevent you from losing more when the market is sinking. But the price you'll pay for that immediate comfort can be high. You're likely to suffer a long-term setback in the growth of your portfolio as you miss out on some of the recovery's most dramatic gains.

For those reasons, holding your investments during a recession is usually the better approach. Assuming you own quality stocks, they should rebound -- often before you can tell that the recession has ended. And when that happens, the sting of those temporary and unrealized losses will fade quickly.