Sales of personal computers remained rather brisk in the recently ended second quarter, up 4.6% compared to the second quarter of last year when demand was surging due to the advent of the pandemic. But not every computer manufacturer saw strength last quarter. Sales of PCs made by HP actually fell year over year during its fiscal second quarter, making it the only major computer name to lose ground.

That's the assessment from technology market research outfit Gartner anyway, which estimates shipments of PCs every quarter based on delivery channels it monitors. Gartner's presumed weakness from HP, however, was mirrored by rival research from IDC.

It's a concerning disparity for HP shareholders for the obvious reason -- the company's upcoming quarterly report could be disappointing. Then, there's the less obvious, more philosophical worry being fleshed out here. That is, HP may well be feeling the brunt of the chip shortage more than its peers. 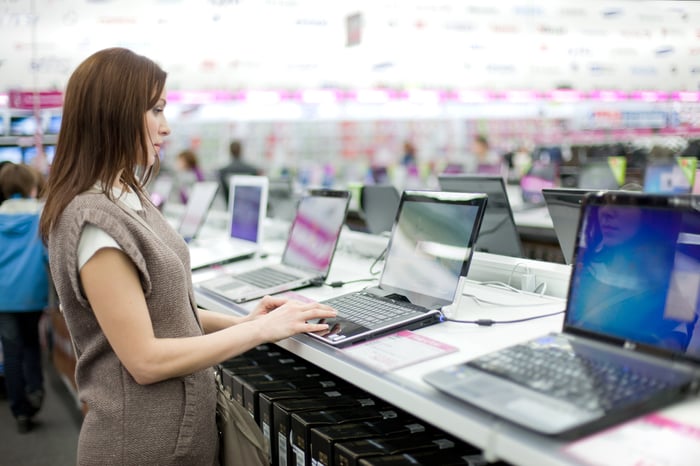 For the second quarter of this calendar year, Gartner estimates a total of 71.6 million personal computers were shipped by the world's top manufacturers, up 4.6% from Q2 2020's 68.5 million units. Apple and Asus led the way in terms of net year-over-year growth, while Lenovo remains the leader in terms of total shipments.

HP remains a respectable second in terms of unit sales, though, shipping 14.3 million PCs in the second quarter. The problem: That's 11.3% less than the number it shipped in the prior-year period, making it the only major brand to log a sales setback during the quarter.

Data source: Gartner. Shipments are in thousands of units. YOY = year over year.

But HP's weakness is evident all the same by this measure too. Up only 2.7% year over year by IDC's calculations, the company once again rolls in as the slowest grower even if it's still one of the biggest overall distributors.

There's an important footnote to add to the discussion. That is, HP was up against an incredibly tough comparison. Remember, it was the go-to brand last year when working at home quickly became the norm. Gartner says HP's personal computer shipments jumped 17.1% year over year in the second quarter of 2020, far outpacing the industry's total delivery growth of 2.8% -- a figure held down by supply constraints linked to shutdowns that were going into effect as early as Dec. 2019 when COVID-19 began to spread out of Wuhan, China. Only Asus and Acer saw stronger growth then, and only by virtue of desperation for any computer that would allow employees to immediately begin working away from the office.

Still, the slowing growth is suspiciously unique to HP.

As of the latest outlook, analysts are collectively modeling revenue of $15.9 billion for HP's fiscal third quarter (ending this month), up 11% from the year-ago COVID-crimped comparison of $14.3 billion. The company is further expected to drive profits up from $0.49 per share last year to $0.84 this time around -- a figure more in line with its longer-term levels. Given that roughly two-thirds of the company's sales comes from its PC business, however, computer shipment estimates from Gartner as well as IDC suggest the consensus estimates may be a bit optimistic. We'll know for sure in late August when the company releases its fiscal third quarter report.

With as much focus that will be given to the raw numbers, long-term shareholders will also want to listen carefully to any supply chain rhetoric that's offered. Something's clearly challenging the business here, and it doesn't seem to be weak demand for computers. Indeed, HP CEO Enrique Lores has repeatedly warned customers and shareholders alike this year that the impact of the semiconductor shortage is being felt. It's just seemingly being felt more by HP than its peers.

There is something of a bright spot for shareholders, though. The stock is down more than 20% from May's high, indicating the market potentially sensed something along these lines was in the cards. Let's just hope the company can at least meet -- or even beat -- investors' lowered expectations.