Please ensure Javascript is enabled for purposes of website accessibility
Log In Help Join The Motley Fool
Free Article Join Over 1 Million Premium Members And Get More In-Depth Stock Guidance and Research
By Brett Schafer - Jul 20, 2021 at 7:36AM

This company has its fingers in a lot of high-tech industries.

Investors in high-tech industries often seek out stocks that will expose their portfolios to fast-growing markets like robotics, semiconductors, 5G, and space exploration. One company helping power all of these industries is Ansys (ANSS 1.58%), a maker of simulation software. Ansys is the largest engineering simulation company in the world, and it has delivered returns of almost 12,000% for shareholders since its IPO back in 1996.

Let's investigate why this company is so special, and consider whether you should add it to your portfolio today.

Founded more than 50 years ago, Ansys provides software simulation tools for engineering departments, both academic and commercial. Its offerings include tools for simulating designs in an array of engineering niches, from mechanical to fluid and electrical. Its clientele comes from the automotive, semiconductor, space, and robotics sectors, among many others. Its software is even used by top Formula One team Red Bull to simulate and improve the performance of its racing cars. 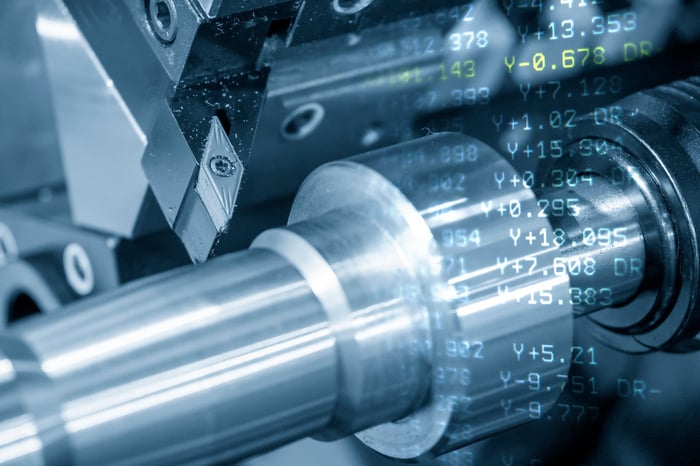 Research and development departments around the globe license Ansys software to test their designs before building products in the real world, which saves them time and money. And Ansys reinvests almost 20% of its revenue each year back into its own R&D projects, further increasing the value of its software to its customers.

After decades of improvements, Ansys's tools are light years ahead of the competition. That's one reason it's able to charge a pretty penny to access its products -- customer sources say the price of a single license can cost anywhere from a few thousand dollars to $50,000 (depending on the product). The combination of its pricing power and its expanding end markets has allowed Ansys to steadily grow its financials over the years.

Ansys has steadily compounded its revenue over the last few decades. In the first quarter, its top line hit $362.2 million, up 19% year over year. Revenue has grown consistently since its IPO, from less than $50 million in 1996 to the $1.74 billion it logged over the past 12 months. Ansys is also highly profitable and has been for a long time with $538 million in trailing-12-month free cash flow. 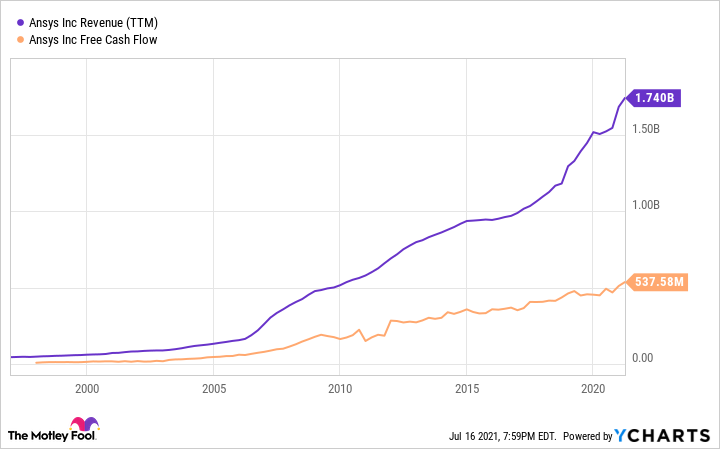 This steady growth is due in part to the company's reliable customer base. R&D departments put in thousands -- sometimes tens of thousands -- of hours working on complex engineering problems using its software, and it would be costly and time-consuming to switch to a competing tool. Given the high switching costs, many of its customers sign long-term contracts, giving Ansys a large backlog of deferred revenue. At the end of the first quarter, this number sat at $936.5 million.

It's trading at a high premium

Given Ansys is a leader within its niche and has been for some time, it's no surprise its shares are trading at a pricey valuation. With a market cap of about $30 billion, its price-to-sales ratio (P/S) is 17.3, and its price-to-free-cash-flow (P/FCF) ratio is 55.8. Both of those figures are well above average, even among its software and technology peers.

Ansys boasts a high free-cash- flow margin of 31%, which it will likely have trouble expanding, especially if management remains committed to spending approximately 20% of revenue on R&D each year. This isn't necessarily bad for the company (it's actually quite impressive Ansys can have such strong free-cash-flow margin while simultaneously spending so much on R&D), but it shows the limits to growing free cash flow through increasing profit margins alone.

So does it belong in your portfolio?

Its technological advantages and high switching costs give Ansys a wide moat. This combination has helped it consistently produce market-beating returns over the years, and it should keep profit margins durable. But because the stock is trading at such a premium valuation, it is staying on my watch list for now. There's no reason to sell shares you already own, but for the time being, there are better opportunities out there for investors.

This Software Giant Could See a Huge Lift From the Metaverse