Shares of N-able (NYSE:NABL) were down 12.6% Tuesday afternoon as of 12:15 p.m. EDT, according to data from S&P Global Market Intelligence. The cloud-based IT service software company completed its spinoff from SolarWinds (NYSE:SWI), the tech-management company at the heart of a massive security breach that was revealed last December.

SolarWinds shareholders of record on July 12, 2021 each received one share of N-able, adjusting for the more than 41% drop in SolarWinds share price on Tuesday. 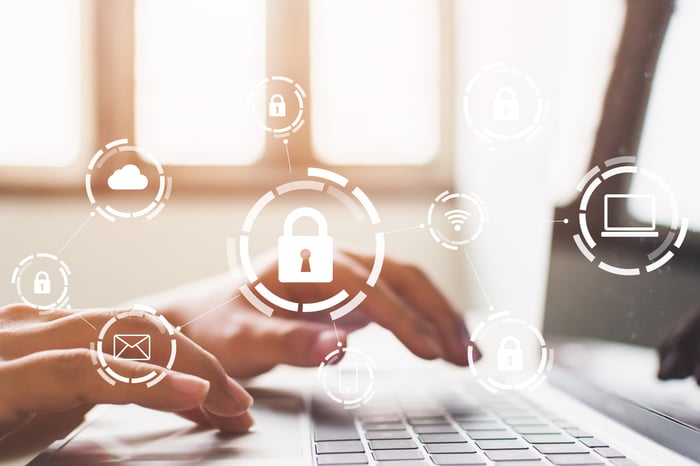 SolarWinds filed paperwork with the Securities and Exchange Commission (SEC) last December about the spinoff. Fortuitously, this was just days before cybersecurity firm FireEye revealed it was hacked through SolarWinds IT monitoring and management software Orion. A slew of other tech companies, including Microsoft and various government agencies, were also affected.

It's been tough going for SolarWinds ever since, but spinning off N-able will allow the smaller software business to create some distance for itself from the embattled services that will remain under the SolarWinds name. There was no specific news from N-able to account for the 10% decline in share price, but the completion of the spinoff plus what remains of SolarWinds (about $10 per share for SolarWinds stock, plus about $13.5 per share for N-able) represents a big rally back toward SolarWinds' all-time highs notched last December, right before the Orion hack was revealed.

SolarWinds and N-able reported preliminary second-quarter 2021 financial results in July (prior to completion of the spinoff). Total revenue is expected to be up approximately 6% year over year to $260.8 million to $262 million, and about $84.8 million to $85 million of that revenue was generated by N-able. On a pro forma basis, N-able's sales were up 16% from a year ago, while the business that remains with SolarWinds was up a meager 2%. N-able's stand-alone profitability has yet to be revealed.

While it will be an uphill battle for SolarWinds going forward, N-able is a promising cloud software business. It provides various monitoring, service, and security solutions for managed service providers (MSPs), a way for organizations to remotely manage their IT systems.

Prior to the separation from SolarWinds, it was announced that N-able was also raising $225 million in cash from private investors to fund its fledgling stand-alone operations. Of the two stocks SolarWinds shareholders now have -- legacy SolarWinds, and now N-able -- the latter cloud software business looks like the more promising bet.