The monitoring specialist's stock price plunged after it was revealed its software was hacked.

IT management software developer SolarWinds ( SWI -2.64% ) grabbed a lot of attention this week -- and not in a good way. The cybersecurity outfit FireEye revealed on Sunday that some of SolarWinds' software had been hacked, which caused a major "global intrusion campaign" that has been affecting "public and private organizations around the world."

Following the bad news, the software monitoring specialist's stock price dropped by more than 15%. Does this event represent a reason for investors to avoid the stock, or is it an opportunity to buy the dip?

The consequences of the hack of SolarWinds' software is still being determined, but given the company's large client base, they could be significant. 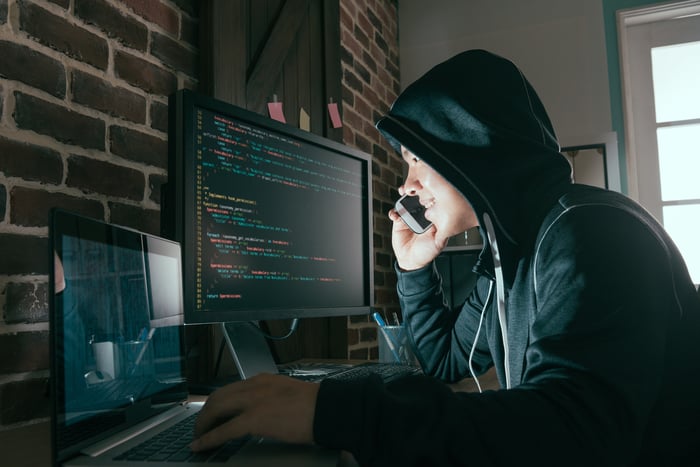 SolarWinds provides software to monitor and manage computing infrastructures. That includes networks, databases, applications, devices, and more. The company serves more than 320,000 customers, and management was anticipating full-year revenue to land in the range of $1.017 billion to $1.022 billion, up 8.5% year over year at the midpoint of analysts' expectations.

So what happened? Like many on-premises software vendors, SolarWinds regularly provides software updates that customers can download and install in their data centers. The problem is high-level hackers have replaced a part of SolarWinds' Orion solution software updates with their own malicious code. That allowed the hackers to access customers' internal computing infrastructures and conduct hostile activities,  including stealing data.

So far, SolarWinds management estimates the hack impacted less than 18,000 customers, which is still a significant number of affected clients. Investigations indicate that the vulnerable software was released in updates between March and June, and the Orion platform is a key element to the company's portfolio as it consolidates tools to monitor networks, databases, servers, and more.

How customers will react to this event is still uncertain, but the company is likely to face a drop in its revenue before the dust settles. Revenue from the Orion products represented 45% of total revenue during the first nine months of this year.

In addition, the Cybersecurity and Infrastructure Security Agency (CISA) advised all U.S. federal civilian agencies to "disconnect or power down SolarWinds Orion products immediately" -- a pretty negative marketing campaign for the company, which could damage its reputation beyond the short term.

Despite SolarWinds' stock price drop of more than 15%, the stock still isn't considered a bargain. It is trading at forward enterprise value-to-sales and price-to-earnings (P/E) ratios of 7.5 and 20, respectively, which suggests the market still expects strong performance over the next many years.

In addition to the unknown consequences of the hack beyond the short term, SolarWinds is also about to face extra uncertainties with significant changes coming for its business. After more than 14 years as CEO, Kevin Thompson will leave SolarWinds on Jan. 4. And during the first half of 2021, the company is planning to spin off its activities with managed service providers (MSP), which represent about 30% of revenue. These MSPs leverage SolarWinds' technology to monitor, manage, and secure the computing environments of over 500,000 businesses around the world.

SolarWinds is also competing with legacy vendors such as International Business Machines over its on-premises and cloud solutions business. It's also facing intensifying competition with cloud-native high-growth players in this area. For instance, Datadog has been delivering impressive performance over the last several quarters and New Relic is now trying to attract new customers with free offerings.

Then there is the issue of the company trying to manage a debt load currently totaling $1.48 billion in excess of cash and cash equivalents at the end of the last quarter. In comparison, it generated $332 million of free cash flow over the last 12 months.

Despite this recent dip in SolarWind stock, investors should consider staying on the sidelines right now. The tech stock still isn't a bargain. That's even before taking into account any negative outcome from the recent hack.

Why SolarWinds Stock Got Crushed Today

Why SolarWinds Stock Had a Sunny Day