Please ensure Javascript is enabled for purposes of website accessibility
Log In Help Join The Motley Fool
Free Article Join Over 1 Million Premium Members And Get More In-Depth Stock Guidance and Research
By John Ballard – Jul 21, 2021 at 7:15AM

These growing companies have plenty of cash to reward investors.

The current bull market in stocks has the Dow Jones Industrial Average elevating close to 35,000 points. At these kinds of highs, investors should think about what stocks they should have in their portfolios if the market falls.

Businesses that have lots of cash on the books and produce robust amounts of free cash flow tend to be safer stocks no matter the market environment. These are companies that can continue reinvesting in growth and/or pay dividends to deliver wealth-building returns for investors.

These three growth stocks produce loads of cash and investors should keep the companies on their watch lists or even consider buying today. 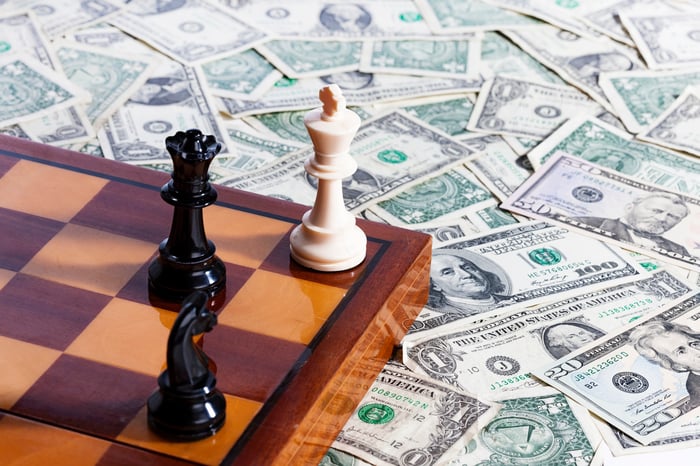 PayPal Holdings (PYPL -0.83%) has built a ubiquitous payments platform with 392 million active accounts. That is more than double the account total from five years ago, setting up PayPal to generate loads of fees from its growing payment volume as users engage with their accounts for everyday transactions.

Over the last four quarters, the company processed more than $1.03 trillion of payments. That earned PayPal roughly $22.9 billion in revenue and generated $5.3 billion in free cash flow.

The reach and scale of PayPal's business have created a cash monster. PayPal ended the first quarter with $19 billion in cash and investments. After deducting long-term debt, it has a net cash position of $10.1 billion.

With e-commerce still making up less than 15% of total U.S. retail sales, PayPal has plenty of room to grow into a much larger business over time, and that should keep the stock price moving higher over the long term.

With more than 200 million Prime members, Amazon (AMZN -0.77%) is a major force in the $900 billion U.S. e-commerce market. Prime Day has become as big of a revenue producer as the holiday shopping season, and yet even after Amazon's tremendous growth over the last 25 years, it's still showing it can grow much larger.

Businesses are eager to shift to digital services coming out of the pandemic, which spells more demand for Amazon's high-margin cloud services unit. This should translate to significant increases in Amazon's profitability over the next few years. While Amazon Web Services made up 11% of total revenue over the last four quarters, it continues to contribute around half of Amazon's total operating profit.

Amazon ended the first quarter with $73 billion in cash and short-term investments. That's up 299% over the last five years, bringing trailing-12-month free cash flow to $26 billion through the first quarter.

Analysts see Amazon's free cash flow per share nearly doubling over the next few years. Over the last year, capital spending more than doubled to $41 billion, which is all financed internally through Amazon's $67 billion in operating cash flow. Amazon is investing in several areas, including fulfillment centers, delivery fleets, and Amazon Air. The more cash that rolls in, the more Amazon can invest in big projects that will keep the business growing.

Apple (AAPL -1.96%) started the year with 1.65 billion active devices, up from 1.5 billion in 2020, and 1.4 billion at the start of 2019. The prospects for further gains in active devices are looking bright, as reports have surfaced that Apple is raising its orders for the iPhone 13 by 20% to 90 million units.

Further growth in active devices will lead to more subscriptions to its services like Apple Music, Apple TV+, Fitness+, and others. This is where Apple is starting to make some serious cash. Services generate roughly twice the gross profit margin as products and grew 25% year over year in the first half of fiscal 2021. Apple recently added another service to its offering with podcast subscriptions.

Apple ended the most recent quarter with $204 billion in cash and investments sitting in the bank. Even as management works to achieve a balance of cash and debt on the balance sheet, it generated $90 billion in free cash flow over the last year, so it might take a while, and that's why investors should feel safe with this tech giant. It makes products people enjoy, and it produces plenty of cash to pay increasing dividends over time.

Expectations are building for a strong iPhone launch this fall, as more customers are likely starting to get more interested in upgrading to a 5G phone, so now might be a good time to consider buying shares.