Dish Network's (NASDAQ:DISH) Boost Wireless customers may soon see different network coverage. The satellite provider signed a 10-year, $5 billion agreement with AT&T (NYSE:T) to use its wireless network. The deal will allow Dish to switch from T-Mobile US (NASDAQ:TMUS), which agreed to wholesale its network to Dish until 2027 as part of its merger agreement with Sprint.

The move is strategic for both Dish and AT&T, but it also presents a small blow to T-Mobile, which is building a ton of capacity on its network. 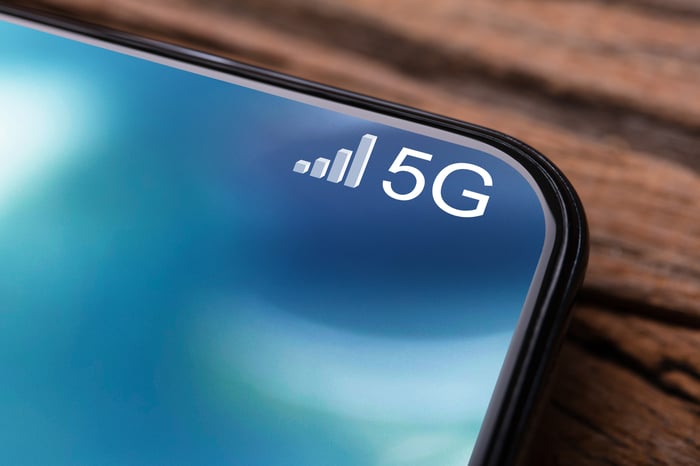 Dish's current contract with T-Mobile gives it the rights to use its network until 2027, seven years following the carrier's merger with Sprint. With its AT&T deal, Dish has the opportunity to extend its MVNO service for another four years or so while it continues to build out its own wireless network.

Dish owns billions of dollars' worth of wireless spectrum, but it takes both time and money to deploy it and build out a suitable network. Dish is committed to building out its network to cover 50% of the U.S. population by 2023, and 70% of its spectrum's reach by 2025. Otherwise, it'll face fines from the FCC. To get there, though, Dish can get by with focusing primarily on dense urban areas.

Dish will still need to provide nationwide coverage to compete with the big carriers, though, and that means relying on one of the Big Three for rural coverage. A contract with AT&T extending into the next decade gives Dish a lot of room to use its capital most efficiently.

AT&T gets two things in the deal with Dish.

First, it gets a cash infusion of at least $500 million per year, and much more in the early years of the contract. That can help with its debt-reduction initiatives, which will accelerate following the divestments on DirecTV and WarnerMedia. AT&T's balance sheet became loaded with debt following those acquisitions, and it's faced pressure from investors to get its debt under control. It'll still have a lot of debt on its balance sheet following those spinoffs, but $500 million per year can certainly help.

Second, AT&T will have access to Dish's spectrum holdings to build out a network to support its MVNO customers. That extra spectrum can help improve AT&T's network capacity without requiring AT&T to spend billions more on spectrum licenses in the future.

There's also the potential that this agreement with Dish will open the door for AT&T and TPG to merge DirecTV with Dish Network. That could be a major win for both AT&T and Dish (if it gets regulatory approval), which could realize significant synergies from removing redundant resources in the satellite TV business. For AT&T, it would get DirecTV fully off its books.

A small blow to T-Mobile

T-Mobile was always expecting to lose the Dish Network MVNO contract. It had every expectation that it would no longer provide a material contribution to revenue in the long run as Dish built out its own network and explored opportunities with other network providers.

That said, it didn't expect to lose Dish's business so quickly. T-Mobile's decision to decommission the old Sprint CDMA network may have been a contributing factor to Dish's moving on from T-Mobile. AT&T doesn't offer a CDMA network, either, but there's effectively no loss for Dish if T-Mobile won't support its CDMA customers after 2021 anyway.

T-Mobile will lose at least $500 million per year in revenue. In the first three quarters of its agreement, T-Mobile's wholesale revenue increased by $1.77 billion. So the cost in these early years is much more substantial.

T-Mobile's growth story, however, is its spectrum advantage in 5G and its continued growth of postpaid subscribers. It expects to add between 4.4 million and 4.9 million net new actives in 2021. So while having Dish work with AT&T may not have been in the latter's plans, it won't have a huge negative impact on the telecom stock, and it has no impact on management's long-term expectations.