The chipmaker could be gearing up for its biggest takeover ever.

Intel (INTC 2.71%) is considering a $30 billion takeover of GlobalFoundries, the world's fourth-largest chip foundry, according to The Wall Street Journal. The rumored deal would mark Intel's biggest acquisition ever, and cancel GlobalFoundries' planned IPO. 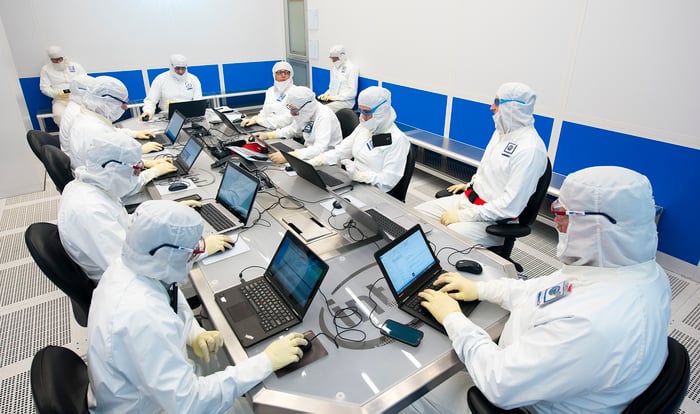 These rumors aren't surprising, since buying GlobalFoundries would significantly accelerate Intel's plans to expand its first-party foundries. But it still rocked many chip stocks as investors processed the news Let's see how an Intel takeover of GlobalFoundries could impact TSMC (TSM 5.14%), UMC (UMC 7.41%), AMD (AMD 2.71%), and Nvidia (NVDA 5.24%) -- and if investors should be concerned.

GlobalFoundries controlled 5% of the global foundry market in the first quarter of 2021, according to TrendForce, putting it in fourth place behind TSMC (55%), Samsung (17%), and UMC (7%). Samsung isn't listed in the U.S., so let's focus on the two U.S.-listed Taiwanese foundries: TSMC and UMC.

TSMC is far ahead of GlobalFoundries and UMC in the "process race" to create smaller chips, which are measured in nanometers. TSMC started mass producing 7nm chips in 2019 and 5nm chips in 2020.

GlobalFoundries still can't manufacture any chips smaller than 12nm. It tried to develop 10nm and 7nm chips, but abandoned those efforts after AMD -- its former parent company -- outsourced its newest chips to TSMC instead. UMC's most advanced node is 14nm.

Therefore, Intel won't catch up to TSMC by simply buying GlobalFoundries. However, Intel could integrate its own foundry technologies -- which are currently transitioning from 10nm to 7nm chips -- then pump billions of additional dollars into GlobalFoundries to gradually produce smaller and denser chips.

Until then, Intel and GlobalFoundries could continue receiving orders for less advanced chips. That expansion could impact TSMC's orders for older chips (larger than 7nm), which still accounted for 59% of its revenue last year, as well as UMC's entire business.

AMD initially outsourced its production to GlobalFoundries after the spin-off, but shifted to TSMC's more advanced processes three years ago. That move enabled AMD to stay ahead of Intel -- which fumbled its transition from 14nm to 10nm chips, then dropped the ball again with its troubled 7nm process -- in the race to develop more advanced chips.

Intel's mistakes, which caused periodic chip shortages, resulted in massive market share losses to AMD over the past few years. But if Intel gobbles up GlobalFoundries, it could accelerate its development of new chips, while its increased scale could help it avoid future chip shortages. Intel could also use that expanded capacity to accelerate the production of its new discrete GPUs to challenge Nvidia and AMD.

Nvidia probably isn't too worried about Intel's GPUs, since it controlled 81% of the discrete GPU market in the first quarter of 2021, according to JPR. AMD controlled 19%, while Intel held a zero percent share.

Yet it's still too early to tell if Intel will gain a foothold in the GPU market with aggressive pricing and bundling strategies. Intel's expanded capacity might also enable it to manufacture new GPUs at lower prices than Nvidia and AMD -- which both outsource their GPU production to Samsung and TSMC.

Intel's manufacturing future looked murky under CEO Bob Swan last year. But under Pat Gelsinger, the engineering veteran who replaced Swan earlier this year, it looks much clearer. Intel is doubling down on its internal foundries with a $20 billion investment in its domestic plants, and it will continue expanding with the help of government subsidies in the U.S. and Europe.

That deal might pull some orders away from TSMC and UMC, help Intel avoid future R&D blunders and chip shortages, and possibly help it crack NVIDIA and AMD's near-duopoly in discrete GPUs. That's all speculation for now, but investors should nonetheless be prepared for a mega-deal that could shake up the entire semiconductor sector.