The best is yet to come for Disney.

Disney (DIS 1.02%) has been on an epic run this century, buying Pixar, Marvel, and Lucasfilm and then launching the fastest-growing streaming service in history. But the growth story may just be starting for this media stock.

The combination of Disney+, Hulu, and ESPN+ opens up a world of opportunities for Disney to expand its business. At the same time, it's cutting out the middlemen who have long controlled how Disney reaches customers. The result is an even more powerful company, which is why I plan on buying more Disney stock this week. 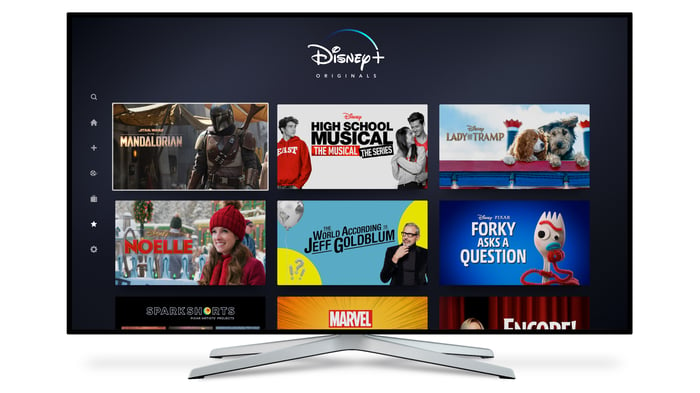 Breaking out of the media mold

In the movie business, Disney always relied on distribution partners to reach end customers. At the box office, Disney only keeps around 60% of the ticket revenue, sharing the rest with theater operators. But Disney+ is breaking that mold, as seen by the $60 million in streaming revenue for Black Widow on opening weekend compared to an $80 million domestic box office, about $48 million of which Disney actually keeps.

The cable business is no different. ESPN has long been the most profitable cable network, but it still has to sell itself to cable operators, who then sell to end customers. Streaming cuts the cable operator out, which should help margins long term.

Disney is breaking out of the distribution constraints of the old world of media. That's opening up new opportunities for the business to grow long term, and Disney may be in a better position than any other media company.

Ben Thompson of the newsletter and podcast Stratechery has described one of the internet's biggest disruptions as going from a world of scarcity to a world of abundance. The newspaper only had so many pages each day for content, but the internet has almost unlimited space for content of all types. Televisions used to be limited by the number of channels and hours in the day, but the internet allows the entire world of content to be available to anyone at any time with the click of a button.

This dynamic will change media because suddenly media companies don't have to reach the widest possible market, they can distribute valuable niche content. For example, if you're running ABC today and are thinking about licensing sports content, you want to have sports with the broadest appeal to the most people possible because your channel is going into nearly every home in the country. So, the big money content deals go to football, baseball, basketball, and hockey.

In a world of abundance, passion and intensity of fans is more important. Formula 1 may not have as big a following as the NFL, but its fans are intense. The same goes for soccer and cricket and the UFC. A streaming service that offers these niche sports may actually have a more intense and loyal following that's willing to pay more for a service than one that offers the NFL. This is why ESPN+ recently signed deals with Wimbledon, La Liga, and an expansive deal with the NHL that includes an out-of-market package. For Disney and ESPN, an abundance of niche content could be better than simply having content that's mildly appealing to everyone.

You can think of Disney+ and Hulu the same way. They're offering deeper content in niche areas than any network or movie ever could. That's the brilliance of shows like The Mandalorian and Loki, and Disney has the content to fill content niches for almost anyone.

What's critical to making this niche content work on streaming is having a subscriber base that's able to pay for a large variety of content. These subscribers get the money flowing so more content can be acquired, which will lead to more subscribers and so on. Disney is one of the few streaming content companies with a big enough subscriber base to make a big move in content.

The final reason Disney is just starting to see its potential is that it's very early in a direct-to-consumer business model. I've called Disney's business a waterfall with movies driving DVD sales and network content and eventually theme park sales. They all work together.

What better way to improve each of those businesses than by having a direct relationship with customers? As a Disney+ subscriber, Disney now knows what I like to watch and what my kids watch, which not only informs future content, it could lead to marketing for theme park trips or cruises in the future. And that level of granularity wouldn't be possible without direct-to-consumer streaming.

Disney has lost $4.5 billion over the last year because of shutdowns related to the pandemic, so investors aren't yet seeing the company's potential come to life. You can see below that Disney was growing quickly pre-pandemic and after the launch of Disney+, and that growth could continue when operations are fully open again. 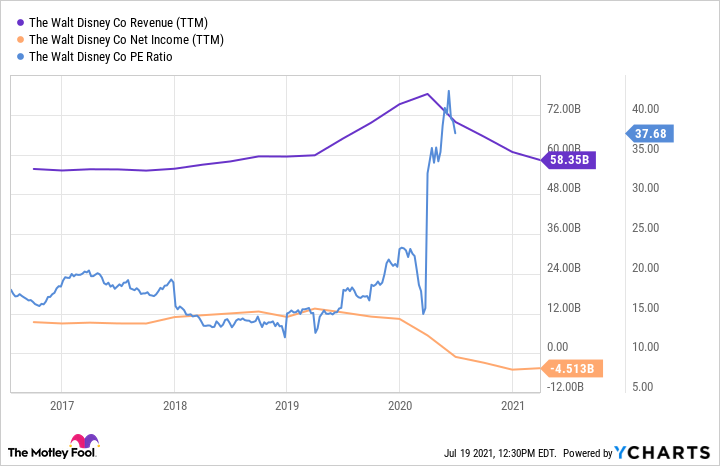 Despite the short-term losses, I think Disney is well-positioned for a new media world where companies can reach customers directly and Disney can bring multiple types of content, like sports, movies, and TV shows, to the market. This strategic position is why I'm buying Disney stock this week and staying bullish on the stock long term.