Please ensure Javascript is enabled for purposes of website accessibility
Log In Help Join The Motley Fool
Free Article Join Over 1 Million Premium Members And Get More In-Depth Stock Guidance and Research
By Leo Sun – Jul 24, 2021 at 7:45AM

Could the ambitious fintech company overtake the market leader?

Square is worth nearly $120 billion as of this writing, while PayPal is worth over $350 billion. That isn't surprising, since PayPal still serves a much larger audience and operates in more countries than Square. But gazing into the future, could Square eventually match -- or even surpass -- PayPal's valuation by 2025? Let's examine both fintech companies' growth trajectories and valuations to find out. 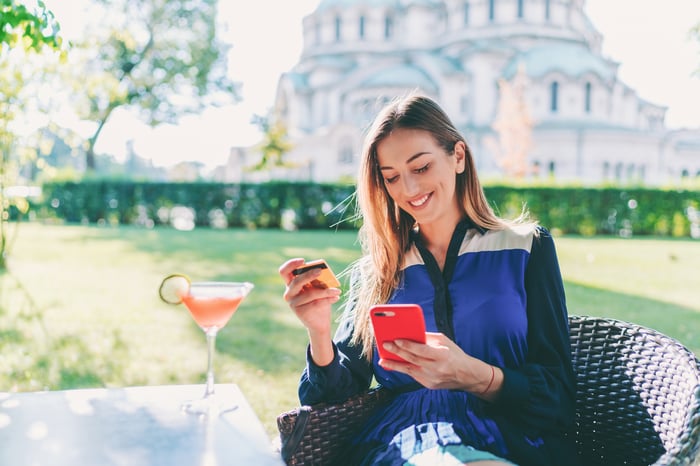 But Square has been willing to take bolder risks than PayPal over the past few years. It expanded its services ecosystem with online payroll management services and analytics tools, and recently launched a full suite of online banking services. Square also added Bitcoin (BTC) purchases to its Cash App in 2018, added free stock trades to the app to challenge Robinhood in 2019, and plans to add Credit Karma's tax filing services to its ecosystem in the near future.

PayPal only started offering cryptocurrency trades last October, and it doesn't have any near-term plans to launch stock trading tools or dedicated tax filing services, or expand into a full-blown online bank like Square. Simply put, Square seems to have wilder and grander ambitions than PayPal.

Analysts expect Square's Bitcoin revenue to continue rising this year before cooling off next year. They also expect its growth in transaction-based and seller service revenue, which slowed down during the pandemic, to recover as more businesses reopen. The Cash App, which grew its monthly active users 50% to 36 million in 2020, should also keep expanding as Square adds new services.

Cathie Wood's ARK Invest expects Square's transaction-based and seller service revenues to grow at a CAGR of 19% through 2025. It also expects the Cash App's MAUs to more than double to 75 million, for Square to monetize roughly 40% of those users, and for its average revenue per Cash App user to grow from $25 in 2019 to $260 in 2025 -- which would represent a whopping CAGR of 49%.

PayPal's growth should remain more predictable, since it doesn't generate significant revenue from cryptocurrencies yet. Instead, it will mainly rely on its growth in active accounts, which rose 21% year-over-year to 392 million last quarter, to generate stable revenue from its processing fees.

PayPal expects to nearly double its active accounts to 750 million and more than double its annual revenue to over $50 billion by 2025. It also plans to grow its earnings at a CAGR of 22% from 2020 to 2025. It believes the rising acceptance of QR codes and NFC payments, the expansion of its financial services, and higher engagement rates for its apps will all drive that long-term growth.

Will Square be worth more than PayPal by 2025?

In a best-case scenario, ARK Invest believes Square's stock could hit $500 per share by 2025 if it hits its growth targets. But unlike PayPal, Square hasn't provided any concrete targets of its own yet.

If Square hits $500 and its valuations hold steady, it could be worth just over $200 billion by 2025. Meanwhile, if PayPal achieves its goals of more than doubling its annual revenue and growing its EPS at a CAGR of 22% through 2025, its stock could easily double and boost its market cap to $700 billion.

Therefore, it's doubtful that Square -- which already trades at higher valuations than PayPal -- will be the more valuable company by 2025. But that doesn't mean PayPal is necessarily a better growth stock than Square. I personally own Square instead of PayPal, because I admire its ambitious and forward-thinking strategies. Both stocks are still great long-term investments on the booming fintech market, so investors shouldn't fret too much over which company has the higher market cap.