These companies are benefiting from the economic recovery.

After last year's impressive rebound, the U.S. stock market has shown no signs of slowing down. On Friday, the S&P 500, Nasdaq Composite, and the Dow Jones Industrial Average all closed at record highs. Inflation worries, pandemic fears, and other risks aside, it's safe to say the economy is well on its way toward recovery.

With that, we asked some of our contributors which industrial stocks they thought could skyrocket in the second half of 2021. They chose Hyzon Motors (HYZN -1.12%), PTC (PTC -0.80%), and Honeywell International (HON 0.78%). Here's what makes each a great buy now. 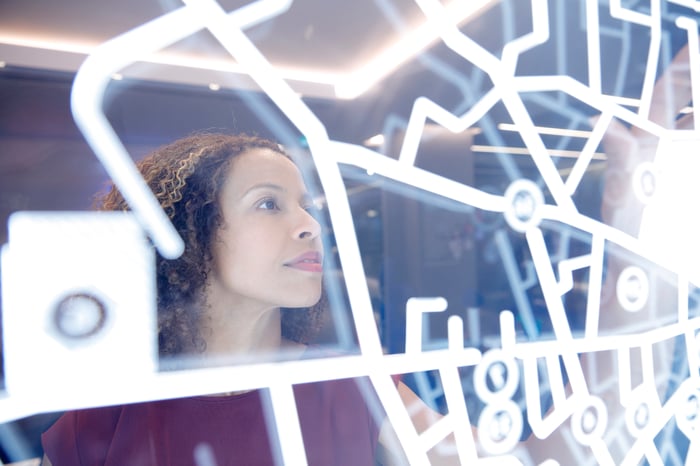 This fuel cell stock could move into the fast lane

Scott Levine (Hyzon Motors): If Hyzon Motors isn't a name you remember seeing among the other usual fuel cell suspects, it's not that surprising. The company's stock has only been trading for a few days since completing its merger with the SPAC Decarbonization Plus Acquisition. Unfortunately for those who decided to hitch a ride with Hyzon, it's been a rocky road so far; shares closed 15% lower on June 19 -- its first day of trading after the merger was completed -- and the stock failed to fully bounce back during the week. Look down the road though, and it's quite possible that Hyzon could motor ahead in the coming months.

A manufacturer of fuel cell-powered commercial vehicles, Hyzon Motors is a direct competitor of Nikola (NKLA 9.62%). Hold on -- don't head for the exit ramp just yet. After the stock's wild ride over the past year, many investors may be wary about hopping on board with another stock of its ilk. This resistance, I think, is one of the main reasons why Hyzon's stock has performed so poorly during its first week of trading.

But Hyzon is no Nikola. Unlike Nikola, Hyzon foresees fuel-cell vehicles rolling off the assembly line this year. With its parent company and partners, Hyzon succeeded in delivering vehicles to customers in 2020, and it anticipates doing the same in 2021. During a recent business update, management reaffirmed the company's 2021 sales guidance: delivery of 85 vehicles and revenue of $37 million. Should the company succeed in hitting these targets, investors may very well drive the stock considerably higher (especially since Nikola slashed its 2021 guidance from $150 million to $30 million) as it could instill confidence that the company is on the road to achieving its ambitious targets in the coming years. In 2025, for example, Hyzon projects revenue of $3.3 billion and EBITDA of $505 million.

Last year's rise of Nikola's stock illustrates how the market is eager to embrace manufacturers of heavy-duty trucks that don't fill up at ordinary gas stations; meanwhile, the stock's fall shows how investors' loyalty isn't absolute. If Hyzon succeeds over the coming months in delivering on its projections, investors may embrace the stock as they had Nikola's stock in its early days on the market.

PTC, the best is yet to come

Lee Samaha (PTC): The industrial software company is at the cutting edge of the ongoing revolution in the industrial sector. In reality, industrial companies are in the early innings of the so-called "fourth industrial revolution." It's a fancy title, but the movement toward digitization and Internet of Things (IoT) connectivity is real.

For example, physical assets can be replicated virtually via a "digital twin" by users. The twin can then be used to model the performance of the physical asset predictively. This works through the collection of a mass of data from the physical asset via web-enabled sensors. Think of an electricity-producing gas turbine, a bottling plant, or an aircraft engine constantly working and creating data that allows operators to better predict how and when machinery needs servicing. The cost savings to the operator can be significant.

PTC plays to the market with its IoT platform (ThingWorx) that connects the physical asset to the digital world. Also, its augmented reality (AR) solution (Vuforia) enables technicians to service equipment without even being present, and it digitally overlays information on physical assets to improve the working environment. Those two solution areas make up what PTC's management calls its "growth" product portfolio. Growth is the right word because management sees its IoT and AR solutions growing at a 30% plus annual rate over the medium term.

In addition, management expects PTC's "core" portfolio of computer-aided design (CAD) and product lifecycle management (PLM) solutions to grow at a high-single-digit to low-double-digit rate over the medium term. That's driven by the digital transformation and management's strategy to make them available as software-as-a-service (SaaS) options.

The pandemic has created a lot of interest in automation and digitization. If and when it takes off -- I think it will be sooner rather than later -- PTC is ideally placed to be a significant part of it.

Raking in the free cash flow

Daniel Foelber (Honeywell): Honeywell reported Q2 2021 earnings on Friday, blowing expectations out of the water and raising its full-year guidance. The year-over-year comparisons look incredible, but should be taken with a grain of salt considering the weakness of last year's second quarter.

Honeywell's sales are still down compared to 2019, but they've rebounded substantially over the past year. Total sales are now down just 5% from the second quarter of 2019.

Despite its strong quarter, one of the most notable weaknesses is aerospace, Honeywell's largest segment. Aerospace sales only rebounded 9% from Q2 2020 and remain down over 20% from Q2 2019. Honeywell makes components, equipment, software, and machinery used in the commercial-aviation market, defense industry, and space industry. Commercial aviation is taking time to recover, but management is confident that commercial aviation will continue to improve throughout the year. However, defense and space sales could be pressured due to lower spending by the Pentagon.

Aside from aerospace, the rest of Honeywell's business looks to be a coiled spring for an economic recovery. The midpoint of the company's updated guidance suggests sales of $34.9 billion, adjusted earnings per share of $8.02, and $5.45 billion in free cash flow (FCF). If Honeywell hits its mark, it would be a noticeable improvement from 2020, but a return to annual growth remains unlikely until 2022.

The company has been making long-term investments that should position it nicely to capitalize on the Industrial Internet of Things (IIoT), automation, and the increasing importance of connectivity between assets. I agree with Lee's assessment that the pandemic has shown the importance of digitization in the industrial industry. Like PTC, Honeywell is poised to benefit from this trend. Despite the potential, there's reason to believe we are still in the early innings of what could be a blend of technology and legacy assets to create a new kind of industrial paradigm. Given this backdrop, the company's strong balance sheet, and ample FCF to support the dividend, Honeywell is well-positioned for years to come.