Bank stocks have had a strong year so far, and Q2 results suggest they aren't about to slow down.

Despite interest rates sitting at all-time lows, banks have found ways to make record amounts of money -- and financial stocks are among the best performers of 2021 as a result. Typically, banks are favored by institutional investors for their safe haven status and steady income streams, but this year many of them have performed like growth stocks.

Consumers are cashed up with stimulus dollars and appear willing to borrow and spend as we emerge from the pandemic. Ally Financial (ALLY 0.77%) and Western Alliance Bancorporation (WAL -2.41%) have been big beneficiaries, with their shares up roughly 46% and 59%, respectively, in 2021. Both companies just delivered second-quarter earnings reports that suggest there's still plenty of growth left. 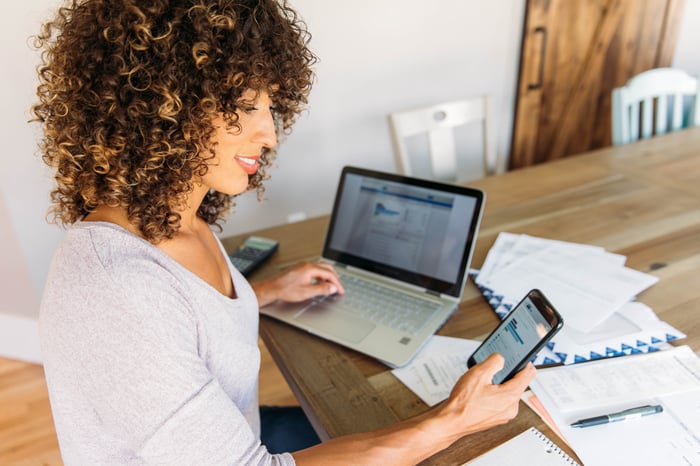 Analysts expected Ally to generate $1.46 in earnings per share for the second quarter, but the company crushed that estimate by delivering $2.33 -- a 59% beat and its highest-ever quarterly result. It was driven by a record 3.5 million car loan originations and 81% year-over-year growth in Ally Home originations, which is the company's fast-growing foray into the mortgage market.

Ally retained its spot as America's No. 1 all-digital bank, with its 49th consecutive quarter of customer growth, achieving 19% compounded annual growth since 2010. Customer deposits climbed to all-time highs partly because of the government stimulus, allowing the bank to lend more money and therefore generate more revenue.

Auto finance is the company's largest segment, making up 64% of total Q2 revenue. It has an auto loan book of $101.8 billion, down 1% since the same time last year, as a lack of vehicle supply is making it harder for consumers to make purchases. However, Ally maintains over 19,700 relationships with car dealerships (a record high) -- which are a vital source of loan originations.

Net interest margins recovered drastically since Q2 2020, which could be described as the deepest part of the pandemic, and it helped to boost overall earnings per share. If margins continue to rise, Ally can be expected to deliver greater profitability going forward.

The 25% increase to the fiscal 2021 share buyback program might be the biggest sweetener for investors. Now at $2 billion, it represents over 10% of the total shares on issue at the current price. Additionally, the company announced a 32% increase to its dividend to $0.25 per share for the upcoming third quarter.

Western Alliance is a tale of two segments. The bank specializes in lending to small-to-mid-sized businesses -- which represents 68% of its total loan portfolio -- and it has a smaller but rapidly growing consumer lending book. On the consumer side, it recently made a big bet on mortgages with the acquisition of AmeriHome, completed in April. It's the third-largest mortgage acquirer in the U.S., and is expected to offer bolt-on growth for Western Alliance.

Analysts were looking for $1.96 in Q2 earnings per share, but the company managed to deliver a 16% beat with $2.29 (adjusted for one-time acquisition costs). The beat was driven by the bank's consumer segment, where growth far outpaced commercial loans -- leveraging the red-hot housing market.

The company's aggressive pivot toward mortgage lending is bearing fruit, as it has lifted the consumer segment to almost a third of its total loan portfolio -- a significant increase from just a year ago. AmeriHome acquired $65 billion in loans during 2020, and managed $99 billion worth of total mortgages at the end of that year -- so clear synergies exist between the two companies, and AmeriHome is likely to be an enormous contributor to the growth of Western Alliance's consumer business.

The company grew its tangible book value by 18% year over year, to $32.86. That puts the stock at 2.9 times tangible book value at Monday's prices. Even though it's on the high side, as the benefits of the recent acquisition continue to flow, it could lead to a material increase in book value in the coming quarters.

Analysts expect Western Alliance to deliver $8.08 in full-year earnings per share in 2021, representing 60% growth compared to the 2020 result. If the company keeps up this pace, particularly with the opportunities provided by AmeriHome, it suggests there could be plenty of earnings beats in the future.

Ally is an advertising partner of The Ascent, a Motley Fool company. Anthony Di Pizio has the following options: long September 2021 $55 calls on Ally Financial. The Motley Fool recommends Western Alliance Bancorp. The Motley Fool has a disclosure policy.

Here's a Bank Stock I'd Buy Before SoFi

Buying Ally Financial Right Now Could Be a Genius Move for Investors. Here's Why.

Credit Quality Might Be Deteriorating, but Ally Financial Is Staying on the Offensive. Here's Why.