Toymaker Hasbro (NASDAQ:HAS) wrestled with many challenges during the pandemic, but business is clearly coming back strong in 2021. Second-quarter sales were up 54% year over year, while adjusted earnings per share hit nearly double the amount analysts were expecting.

The stock price surged after the earnings news, but with film projects returning and new products coming in the back half of the year, it could still have substantial upside. 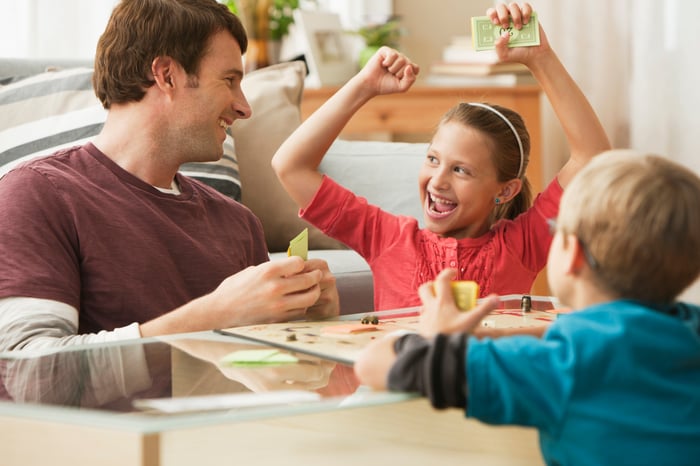 Momentum building across the business

It was a solid quarter across the board, with consumer product revenue growing 33% year over year, digital gaming more than doubling, and entertainment increasing by 47%.

Of course, these numbers are somewhat boosted by the year-ago quarter's slump when revenue fell 29%, but revenue is still up 9% on an adjusted basis going back to Q2 2019.

Management sees revenue growing by double-digit percentages for the full year. This growth will be supported by "significant product launches backed by robust multichannel marketing campaigns slated for the second half," CEO Brian Goldner said during the earnings call.

TV and film projects are back

The return to growth in the entertainment segment might be the bigger catalyst to watch in the second half of the year. The segment is set to return to similar revenue levels as 2019, with deliveries in TV and film starting to return.

Because of the delays in production during the pandemic, Hasbro hasn't had the chance to benefit from the growth opportunities from its acquisition of Entertainment One (eOne), which brings a network of studios and storytelling capabilities to boost Hasbro's growth in the broader entertainment industry.

There are a few notable projects set for release through 2023. Up first is the live-action Transformers: Rise of the Beast coming next year, and in 2023 Hasbro is set to launch a live-action Dungeons & Dragons film.

During the earnings call, Goldner said, "The eOne team continues to develop and move into production of Hasbro IP of more than 200 projects in development across TV, film, and animation, more than 30 Hasbro brands are being developed."

Digital games revenue increased 19% in 2020 and continues to perform well for Hasbro. Revenue more than doubled in Q2, driven by Magic: The Gathering, where demand is at all-time highs following the release of Strixhaven and Modern Horizons 2 in the quarter.

"We continue to invest robustly in digital," Goldner said. He added that Wizards of the Coast -- the subsidiary overseeing the Magic: The Gathering and Dungeons & Dragons card-collecting games -- is on pace for a record year, with a strong slate of new releases on tap for Q3.

Hasbro is a great investment at this level

The stock has recovered most of the gains it lost during the pandemic, but investors are clearly starting to get more bullish. After trading sideways through the first half of the year, the strong earnings performance in Q2 sent the stock surging back above the $100 level, which I would look at as a sign that it's time to either buy now or cry later. 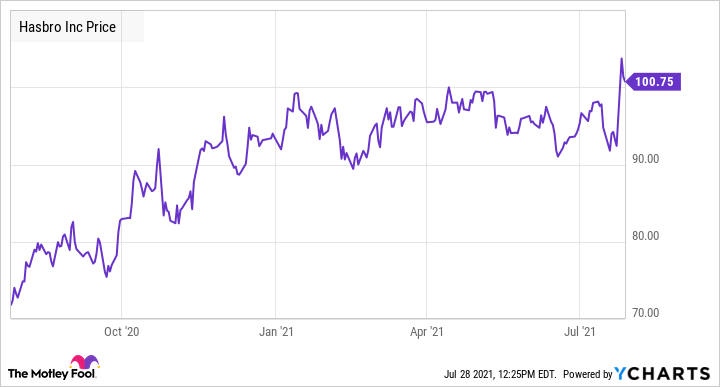 Shares of Hasbro trade at a forward price-to-earnings ratio (P/E) of 21 -- a slight discount to the broader market P/E multiple of 22. Throw on top of that an above-average dividend yield of 2.7%, and investors are looking at a primo entertainment stock to buy right now.