The stock market gave back some of its recent gains on Friday, as high-profile earnings reports weighed on parts of the market. In particular, declines for the Nasdaq Composite (NASDAQINDEX:^IXIC) were worse than most other stock indexes, with the Nasdaq down more than 0.6% as of 12:30 p.m. EDT.

Many investors were displeased with a downbeat outlook from e-commerce giant Amazon (NASDAQ:AMZN), whose shares fell precipitously. However, several Nasdaq stocks were able to move higher even in a somewhat gloomy market environment. Below, we'll look at how Atlassian (NASDAQ:TEAM) and Grid Dynamics Holdings (NASDAQ:GDYN) were able to move sharply higher. 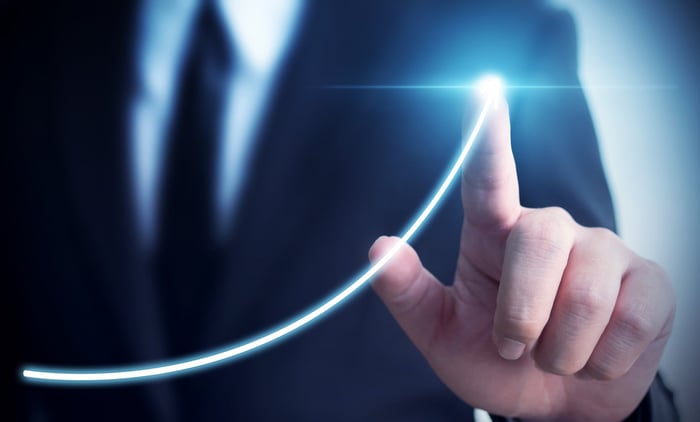 Atlassian is winning the team competition

Shares of Atlassian had soared 23% at midday on Friday. The provider of workplace collaboration software reported stellar fiscal fourth-quarter results that wowed shareholders and the broader investing community alike.

Like many software-as-a-service stocks lately, Atlassian was able to put up impressive growth numbers. Overall sales climbed 30% from year-ago levels, with subscription-based revenue jumping 50% year over year as the company's pivot toward cloud-only installations took hold. Adjusted earnings of $0.24 per share were better than expected, despite having eased lower by a penny from last year's fiscal fourth quarter. Atlassian added more than 23,000 customers in just the last three months, bringing its total client count to more than 236,000.

Yet the company isn't coasting on its past success. It announced its next-generation cloud app development platform, called Forge. It should allow for more-efficient integration for developers to tap into the full functionality that Atlassian's cloud products offer. The company has already seen hundreds of apps take advantage of Forge, and it sees a steep curve higher as the platform becomes generally available.

In an era of digital transformation, Atlassian's tools have proved to be extremely valuable. It's therefore not surprising to see the company enjoy success and for its stock price to have climbed substantially.

Meanwhile, shares of Grid Dynamics Holdings were up 13%. The specialist in digital transformation services announced a lucrative placement for a key client.

Yet what was a more likely cause for the stock's big upward movement was a shout-out from analysts at JPMorgan. The Wall Street giant started its coverage of Grid Dynamics with an overweight rating, setting a price target of $25 per share.

Grid Dynamics and its early investors successfully sold 10 million shares in a secondary stock offering earlier this month at $15 per share, so the gains that the stock has seen are remarkable. With a clear appetite for companies in the enterprise IT innovation space, Grid Dynamics hopes to follow in Atlassian's footsteps with even greater success in the long run.