New Oriental Education (NYSE:EDU) has been one of the most talked about Chinese stocks in recent months. The stock was once considered a top investment in China's booming private education market, but the government's abrupt crackdown on the entire sector erased nearly 90% of its market value over the past three months. Let's take a look back at New Oriental Education's history, why it incurred the wrath of China's regulators, and if its battered stock will ever recover.

New Oriental Education was founded 28 years ago. It was the first Chinese education company to go public in America in 2006, and is still one of the sector's largest players in terms of total students and annual revenue. 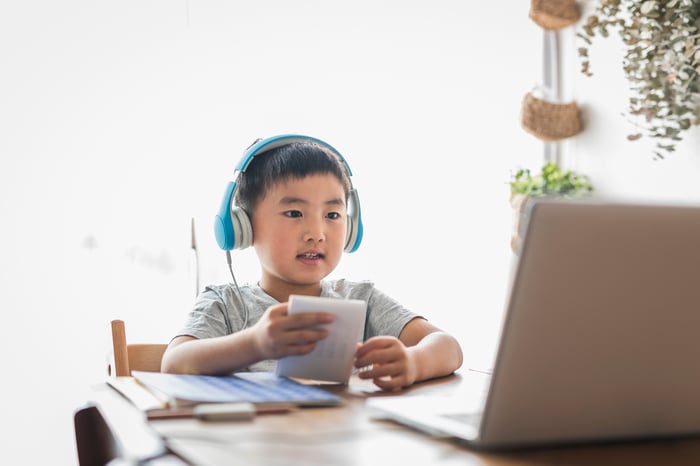 New Oriental operates language schools, learning centers, and bookstores. It generates most of its revenue from its K-12 tutoring services, and it has expanded into online education services over the past six years.

In the first nine months of fiscal 2021, New Oriental's revenue rose 10% year over year to $3.06 billion, its total student enrollment rose 18%, but its adjusted operating margin plunged 660 basis points to 8.8% as it relied more heavily on promotions and discounts to gain more students.

That pressure, which reflects intense competition from rivals like TAL Education and Gaotu Techedu, caused New Oriental's adjusted net income to decline 4% to $417 million. Prior to the government's crackdown, analysts expected New Oriental's revenue to rise 17% for the full year and for its adjusted earnings to dip 3%.

Why did China crack down on its education companies?

The pandemic generated tailwinds for China's private education companies last year, especially for those which offered online courses. That feverish demand sparked a war of aggressive discounts and promotions between the country's top education companies.

That escalation attracted the attention of Chinese regulators, which claimed that private education companies were using predatory tactics to recruit students, applying too much pressure on those students, and exacerbating the educational gap between poor and affluent families.

To address the situation, China's Ministry of Education formed a dedicated division to oversee all of the country's private education companies. In late July, the new division announced it would ban all for-profit school tutoring companies, and that companies which still taught core school subjects could no longer raise capital through IPOs or overseas investments.

Chinese education companies will also be barred from using VIEs (variable interest entities) to circumvent the country's long-standing ban on foreign investments in "sensitive" sectors like technology and education. In the past, many Chinese companies in these sectors -- including New Oriental and its peers -- created VIEs as holding companies in a "middleman" country like the Cayman Islands.

These VIEs, which held shares of the Chinese company, then went public on U.S. exchanges. Closing that loophole would prevent most Chinese companies from listing their shares in the U.S. and potentially render shares of existing VIEs worthless.

China's State Council will also prohibit education companies from offering classes during weekends and school vacations, recruiting students under the age of six, teaching foreign curriculums, and hiring foreign teachers located outside of China. It will also launch its own free online education services to replace these private for-profit platforms.

New Oriental's stock might seem dirt cheap at five times forward earnings, but its valuation is pegged to unreliable estimates which don't account for recent events. China could annihilate the entire private education sector, and it seems doubtful established companies like New Oriental will survive.

New Oriental's best option is to pivot toward its bookstores, non-subject classes (such as art and music), and adult language classes -- which should all be safe from the new regulations. But those smaller businesses can't generate enough revenue to offset a complete shutdown of its core K-12 tutoring services. In short, there's no reason to expect New Oriental and its industry peers to ever recover.