Kinder Morgan (NYSE:KMI), America's largest energy transportation and storage company, continues to generate gobs of cash and distribute the majority of it to shareholders in the form of dividends. The economic recovery is increasing demand and prices for oil and natural gas, benefiting Kinder Morgan and its customers.

The company just reported an excellent second quarter and raised its full-year guidance. Here's a breakdown of why Kinder Morgan is my top high-yield dividend stock to buy now. 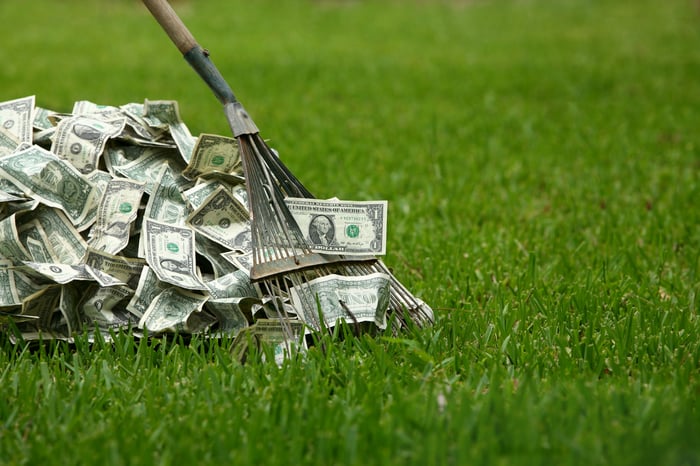 Raking in tons of cash

In the second quarter, the company generated $0.45 of DCF per share, which was significantly more than its $0.27 per share dividend. New guidance forecasts full-year DCF of $5.4 billion -- or $2.37 per share -- and adjusted EBITDA of $7.9 billion. If it hits its targets, DCF would grow 17% year over year and adjusted EBITDA would be up 14% from 2020 -- which was a pretty good year given the state of the oil and gas industry during the pandemic.

The return of a stable and growing dividend

Generating consistently high DCF is the linchpin that Kinder Morgan's business depends upon. To understand DCF's importance, it's helpful to go back in time to the oil and gas crash of 2015. During the first half of the 2010s, Kinder Morgan was ramping up spending and piling debt on its balance sheet to take advantage of high commodity prices. It all came crashing down, and Kinder Morgan was pressured to cut its dividend by 75% to just $0.50 per year in 2015.

Since then, it has been hard at work regaining shareholder trust by establishing itself as a reliable dividend stock. To do that, Kinder Morgan has had to reduce spending, divest away from poor assets, and pack up its gung-ho strategy in favor of prudence.

The following table illustrates the result of Kinder Morgan's business transition on its performance. 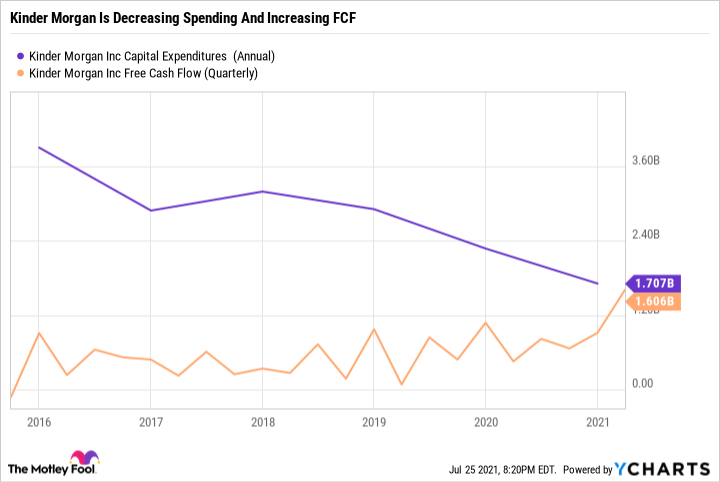 Despite substantially lower capex, which peaked in 2014, Kinder Morgan continues to generate higher free cash flow (FCF) year after year. The company just raised its annual dividend to $1.08 per year, representing a dividend yield of 6.1% at today's stock price.

High yields are becoming harder to come by

Investors are likely cheering the fact that the S&P 500, Nasdaq Composite, and the Dow Jones Industrial Average all closed at record highs on Friday, July 23. And yes, in many ways this is great news. But the reality is that higher stock prices make it harder to find high-quality dividend stocks. All things equal, rising stock prices lower dividend yields for investors. For example, consider that the average stock in the S&P 500 now yields just 1.27%, which is hardly enough to supplement income in retirement. 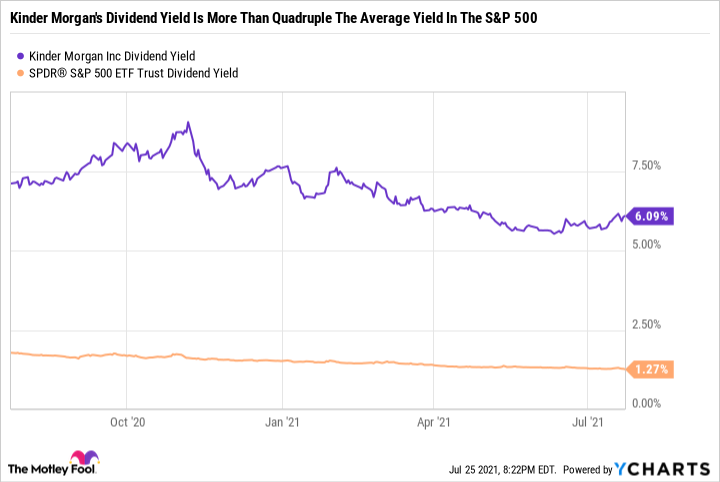 By comparison, Kinder Morgan's over 6% yield is a sizable and reliable return that many income investors will find attractive.

Given its strong performance and guidance, Kinder Morgan is proving yet again that it has the cash to back its dividend. Investors who are worried about the long-term future of fossil fuels can take solace in the fact that the majority of Kinder Morgan's business is tied to natural gas, which has proven it can work alongside renewable energy. Long-term declines in natural gas consumption are certainly a risk to Kinder Morgan's business, and investors should approach that risk in a way that's best for them. However, it's worth bearing in mind that taking on some risk is simply par for the course when it comes to getting a market-beating dividend yield.