But investors shrugged and the news was quickly forgotten, just like IBM's introduction of the world's "first" 7nm chip in 2015 and 5nm chip in 2017. Meanwhile, IBM's stock declined more than 10% over the past five years as it struggled to expand its higher-growth cloud businesses rapidly enough to offset the sluggish growth of its legacy software, hardware, and IT services divisions. 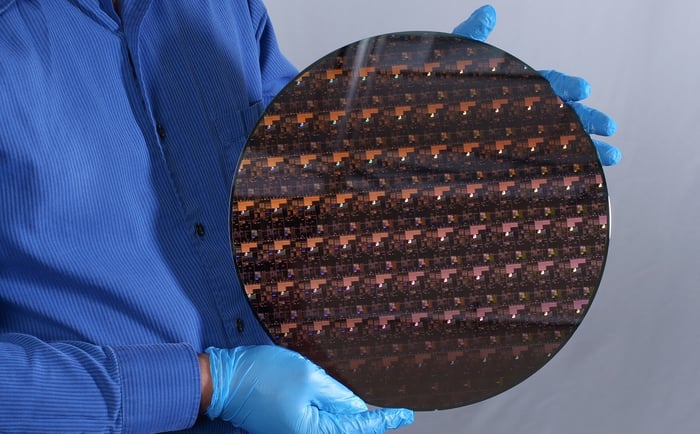 Let's take a look back at Big Blue's chipmaking breakthroughs, why investors were indifferent to those milestones, and whether or not these announcements actually matter to the company's future.

IBM once designed and manufactured PowerPC CPUs, which emerged from the AIM (Apple, IBM, and Motorola) alliance in the 1990s. The AIM alliance introduced PowerPC as an alternative chip architecture to challenge Intel's (NASDAQ:INTC) dominance of the CPU market.

The alliance collapsed in the mid-2000s after Apple switched its Macintosh computers from PowerPC CPUs to Intel's CPUs. But IBM continued to design new Power chips, and the architecture lived on in the OpenPOWER foundation -- an open source consortium that counts IBM, Alphabet's Google, the Chinese server maker Inspur, and the Russian server maker Yadro as its platinum members.

IBM manufactured Power chips until 2014, when it agreed to pay GlobalFoundries $1.5 billion to take over the unprofitable unit. It also agreed to exclusively use GlobalFoundries to produce 22nm, 14nm, and 10nm chips for its own hardware. However, GlobalFoundries gave up on developing 10nm and 7nm chips after AMD, its former parent company, outsourced its most advanced chips to TSMC instead.

GlobalFoundries' decision sparked a lawsuit from IBM, which had expected the foundry to manufacture 10nm and 7nm Power chips for its Power System servers. That clash caused IBM to abandon GlobalFoundries and outsource the production of its newer Power chips to Samsung instead.

IBM's creation of a 2nm chip would be significant if it could mass produce and sell them on its own, or install them into its own Power systems. But IBM doesn't manufacture its own chips anymore, it already shares its chip designs with other companies through the OpenPOWER consortium, and its most advanced 7nm Power chips are produced by Samsung -- which certainly can't mass produce 2nm chips yet.

In other words, IBM's 2nm chip is just a lab experiment. IBM claims that compared to modern 7nm chips, its 2nm chips can boost performance by 45% at the same power levels, or deliver 75% more power at the same performance levels. It also claims its chips are slightly denser than TSMC's upcoming 3nm chips, which are scheduled for mass production next year.

But shortly after IBM revealed is 2nm chip, TSMC fired back with a report detailing its own theoretical breakthrough with 1nm chips. However, TSMC doesn't expect to actually hit that milestone anytime soon -- it plans to mass produce 2nm chips in 2023, but anything beyond that is uncharted territory.

So what should IBM's investors focus on?

IBM's development of a 2nm chip sounds impressive, but it ultimately means nothing. Instead of being distracted by that flashy headline, IBM's investors should focus on three main things.

First, they should see if its cloud revenue, which rose 19% to $25.1 billion last year and accounted for over a third of its top line, continues to rise. Second, they should see if IBM's renewed focus on hybrid cloud deployments and AI services -- accelerated by its takeover of Red Hat two years ago -- will feed that growth and widen its moat against the public cloud giants.

Lastly, investors should focus on IBM's upcoming spin-off of Kyndryl, which will remove the slow-growth managed infrastructure services division from IBM's core business. That move could streamline the "new" IBM and enable it to aggressively expand its hybrid cloud and AI businesses -- but it could also result in lower dividend payments in the future.

Keeping track of these three things will help investors determine if IBM's stock is undervalued at 12 times forward earnings. Anything else, including its claim of creating the world's smallest chip, is just noise.