And they should ease investors' biggest concern.

Here's the one big worry a lot of investors have about Vertex Pharmaceuticals (VRTX 1.85%) these days: revenue prospects beyond its main cystic fibrosis (CF) business. Right now, the company's only commercialized treatments are in CF. Vertex is moving candidates through the pipeline in other areas such as blood disorders, pain, and a rare lung and liver disorder called alpha-1 antitrypsin deficiency. But so far, those pipeline programs haven't eased investors' concerns. The stock has tumbled nearly 15% since the start of the year.

Of course, as a shareholder I'd like to see Vertex bring one or more of those potential products to market. But it's important to remember that the CF story is far from over. Proof of that? Here are 15 words from Vertex CEO Reshma Kewalramani that signal major growth ahead for the CF business... 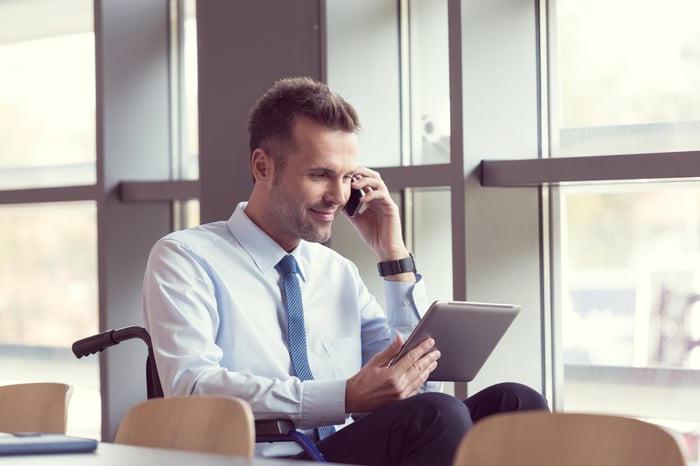 "There are still more than 30,000 people with CF who are yet to be treated" with Vertex's CF products, Kewalramani said during the earnings call last week.

Vertex has been treating patients for years with its transmembrane conductance regulator (CFTR) modulators. These treatments work by correcting a faulty protein involved in the disease process. Different genetic mutations result in different defects in this particular protein. The company sells four CFTR modulators that work for patients with certain genetic mutations.

Vertex is the leader in the global CF market -- and it expects that to continue until at least the late 2030s. But as the CEO says, there still are plenty of potential patients who haven't yet had the opportunity to try Vertex's treatments. For instance, some patients live in countries where the products are approved -- but Vertex still is working on reimbursement agreements. Also, the company is working on winning approval in younger patient groups.

Vertex's latest CF drug presents a particularly big opportunity. The U.S. Food and Drug Administration approved Trikafta in October of 2019. It quickly became a blockbuster. Why all the excitement about Trikafta? Because it can potentially treat up to 90% of people who have CF.

In the second quarter, Trikafta alone brought in nearly $1.3 billion in sales. The company reported a total of almost $1.8 billion in product revenue. But here's what's key: Vertex said in the earnings call that it expects Trikafta's revenue growth prospects to be in the multibillions of dollars in the coming years as the company works to sign on the potential 30,000 patients. Trikafta sells for more than $300,000 per year.

Now you might wonder... Is Trikafta Vertex's best and final CF therapy? Not necessarily. The company continues to innovate. Next in the pipeline is a once-daily combination treatment with potential to surpass Trikafta when it comes to improving CFTR function. Vertex plans to start a phase 3 trial of this candidate in the second half. Kewalramani calls it "the greatest competitor to Trikafta."

And finally, Vertex also is working in partnership with Moderna on mRNA therapeutics for the 10% of CF patients who can't be treated with CFTR modulators. That program is in the preclinical stage.

Of course, as mentioned above, I'm eager to see Vertex advance with programs outside of CF. But at the same time, I'm optimistic about the company's CF prospects. There is a lot more to come. And that's why the stock looks incredibly cheap at today's level. It's trading at less than 17 times forward earnings estimates. That's around its lowest in at least a year and a half. 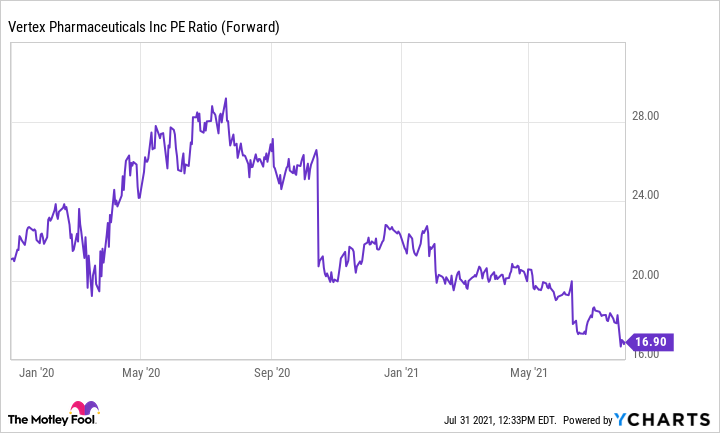 Vertex is delivering growth right now. The company raised its annual revenue forecast to the range of $7.2 billion to $7.4 billion from the range of $6.7 billion to $6.9 billion. But more is on the horizon. Considering all of the points above, growth in the CF business will continue well into the future. And that's why Vertex has time on its side when it comes to bringing other products to market.