The blistering growth of the pandemic couldn't go on forever.

The company has many competitive advantages. It dominates huge industries like e-commerce and cloud computing, and it's become a necessity in modern life for many Americans, especially during the pandemic.

Indeed, buying the stock at almost any point in its history has proven a wise decision. That's why it was a bit of a shock to see Amazon's stock price finish down nearly 8% after a seemingly strong second-quarter earnings report. Amazon stock is fallible, it turns out.

The tech giant reported revenue growth of 27% to $113.1 billion, missing the analyst consensus at $115.1 billion. On the bottom line, the company delivered another round of soaring growth with earnings per share improving from $10.30 to $15.12, ahead of estimates at $12.22. 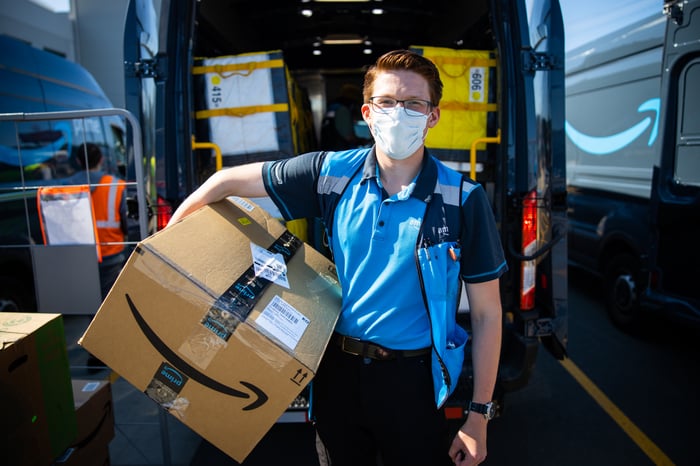 However, investors were focused on the company's slowing growth as it laps the heady months of the pandemic a year ago. For the third quarter, Amazon guided to revenue growth of just 10% to 16%, which was its slowest growth guide in memory. On the bottom line, it only called for operating income of $2.5 billion to $6 billion, below the $6.2 billion it reported in the quarter a year ago.

Historically, Amazon's guidance, especially on the bottom line, is conservative, but the forecast reveals some real challenges the company is facing. The market response also indicates that many investors thought the pandemic tailwinds would last forever, even as consumer spending priorities have clearly changed in recent months.

CFO Brian Olsavsky provided some insight on the earnings call, noting that Amazon's revenue growth rate had hovered around 20% before the pandemic and then surged to 40% for much of the last year. By mid-May of this year, as it lapped that strong growth period and its customers began to return to their pre-pandemic routines, revenue growth fell to the mid-teens, which explains the third-quarter guidance at the same pace.

Olsavsky also warned that that pattern would continue for the next few quarters due to difficult comparisons. Beyond that, however, there's another challenge facing Amazon.

The law of large numbers

Growth rates tend to slow down as businesses get bigger, a rule of thumb known as the law of large numbers, and growing 20% from a $500 billion base would mean adding another $100 billion in revenue in just a year. Amazon did manage to do that last year with the help of the pandemic, but fewer than 30 companies in the U.S. generate that much in revenue annually.

Currently, Amazon is the biggest company in the world by revenue behind only Walmart, and it could pass the retail giant as soon as next year. At $500 billion, Amazon will claim 2% of the roughly $25 trillion in retail sales in the world. Eventually, its growth rate will slow, though it's a testament to the company's business strategy and customer-centric approach that it's been able to grow so much so fast.

Even if Amazon's revenue growth falls under 20%, the stock story is shifting to profit growth. After it operated near break-even for much of its history, Amazon's high-margin businesses like Amazon Web Services, third-party marketplace, and advertising are delivering huge gains on the bottom line. Last year, the company reported $21 billion in net income, and it's made $15.9 billion in the first half of the year.

Its profits will ultimately determine the stock's value, and its profit growth should remain strong, given the momentum in those high-margin businesses. If earnings per share continue to surge, the stock will follow suit as the price-to-earnings ratio has already fallen under 60.

Even with Friday's sell-off, Amazon's stock price is still up 80% from the beginning of 2020, representing a gain of close to $1 trillion in market value. That's a remarkable accomplishment, and many of its FAANG stock peers have done the same thing. That's a reminder that the pandemic created a highly unusual business environment, which helped Amazon and its big tech peers deliver monster results.

Amazon's report signals that for most of them, that period is over. While there's no reason to sell the stock following the Q2 report, investors who had expected last year's growth rate to continue got a needed reality check. Amazon is still one of the most bulletproof stocks on the market, but it can't continue to grow 80% every year.