The Dow Jones is knocking on record levels again, and positive earnings from some of its most popular components could be the catalyst to get it there.

Earnings season has been good for Dow Jones Industrial Average (^DJI -0.56%) stocks so far, and it could get even better. Despite the usual volatility during earnings season, along with worries that the delta variant of the coronavirus could upend the global economic recovery, the index of 30 of the largest U.S. stocks has reached record levels multiple times since early July. And as of 12:58 p.m. EDT on Aug. 3, the Dow is back above 35,000, posting over 200 points of gains and moving back toward record levels.

Can the Dow Jones set a new record soon? Yes, so long as a few things go right in the days and weeks to come, including continued positive earnings results from some of its most popular components, like Amgen (AMGN -0.16%), Home Depot (HD 0.95%), Walt Disney (DIS 0.74%), and Walmart (WMT 0.62%), all of which are scheduled to report results soon. 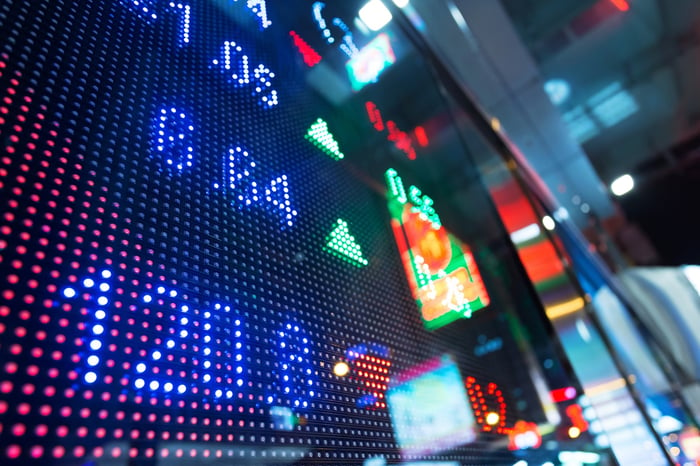 Solid start to earnings season so far (despite this one worry)

For the most part, Dow Jones stocks have delivered the goods this quarter. Apple and Microsoft delivered revenue growth of 36% and 21%, and earnings-per-share growth of 100% and 49% respectively. Visa also reported strong results, with revenue up 27% and 41% higher adjusted earnings per share, along with positive transactions and payments volume that shine positively on the overall economic outlook. In particular, the company pointed out that its U.S. payments volume exceeded 2019 levels in June.

Yet despite these positive results, their shares fell on a combination of worries about the company's guidance -- or lack thereof -- for coming quarters, and concerns about the delta coronavirus variant, which is rapidly spreading, leading to actions from some state and city governments to slow the spread.

Despite the concerns about the delta variant and a litany of other worries including inflation, lack of labor supply, and other risks to the economy, investors continue to be optimistic. Here's a look at how the Dow Jones, along with major stock indexes the S&P 500 and the Russell 2000, have performed over the past two weeks, when the majority of large U.S. public stocks reported quarterly earnings. 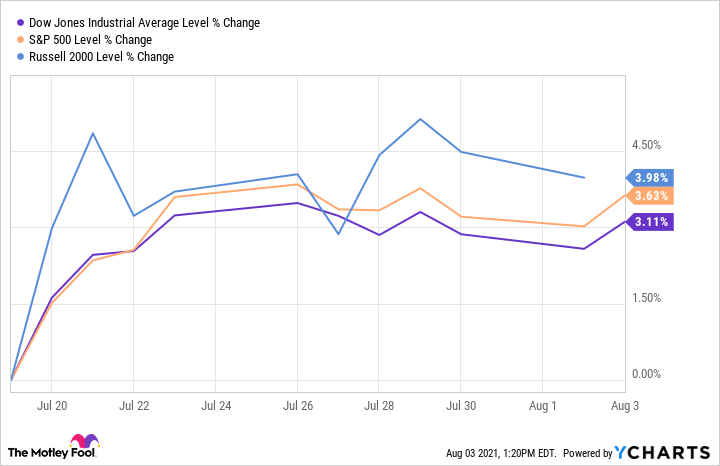 Upcoming earnings could push the Dow back to record levels

Biotech giant Amgen is scheduled to release its second-quarter results after market close today, and this could bode well for the Dow Jones (and Amgen shareholders) if it can beat expectations and provide investors with an update for both its current treatments and drugs working through its clinical trials pipeline. Investors will also want to learn more about Amgen's recently announced acquisition of TeneoBio, for which it will pay up to $2.5 billion.

Disney, Home Depot, and Walmart earnings around the corner

Three of the most recognized consumer companies on earth are set to report earnings soon. Disney reports its fiscal third-quarter results on Aug. 12, with investors focusing on several important things. First, there will be a lot of attention on the growth of Disney+, which has, so far, vastly exceeded all expectations and grown into one of the world's biggest streaming services. Investors are also owed an update on Disney's plans to release future movies directly to Disney+ concurrently with theatrical release. There's possibility of financial downside from this strategy, depending on how a lawsuit from Black Widow star Scarlett Johansson over breach of contract plays out.

Disney investors will also be closely looking for an update on its linear TV results, which are still an important part of its business and likely to remain such for years to come. Lastly, an update on its in-person businesses, including theme parks, resorts, and cruise line, is coming, and investors want to see the financial boost on reopening on the top and bottom lines.

Retail behemoths Home Depot and Walmart are scheduled to report earnings on Aug. 17. Both are also coming off of wonderful first-quarter results.

Walmart reported comps -- sales at stores open more than one year -- increased 6%, even as traffic continued to slow slightly as more shoppers ordered online. Always one to focus on streamlining its business, Walmart's operating income increased 27% in the U.S. segment. Management wasn't ready to offer much of a forecast in the near term, as the pandemic continues to impact supply chains and create economic uncertainty. But with big plans to continue spending on remodeling and e-commerce, investors expect America's biggest physical retailer to deliver another solid quarter.

For Home Depot, last quarter was a blowout. The world's biggest home improvement retailer reported a huge 33% increase in revenue, with traffic up 19% in the quarter, though it's worth pointing out that the quarter ended May 2, overlapping last year's coronavirus lockdown period. Nonetheless, while fewer people were going inside a Walmart or other similar retailer in early 2021, it seemed like everyone was going to Home Depot, spending on home improvement projects. As a result, Home Depot earnings increased an astronomical 83% per share.

Will positive results lead to another Dow record? We may not have to wait

Even though it's still another week (excepting Amgen this afternoon) before we will get the next round of major Dow Jones stock earnings, continued optimism could push the Dow back to another record soon. A healthy economy and increased vaccination rates that could help get the coronavirus surge back under control are helping drive the index back to near-record territory.

It looks like investors aren't ready to count out the economic recovery, or our ability to work through another coronavirus surge, just yet.

These 2 Nasdaq Stocks Are Favorites Among Defensive Investors

Why Did These 2 Growth Stocks Fall Tuesday Night?