Square's stock rallied following the announcement, which accompanied a solid second-quarter report on Aug. 1 that beat analysts' expectations. Meanwhile, shares of its rival PayPal (PYPL -4.93%), which had already been sliding following its mixed second-quarter report on July 28, fell even further after Square posted its earnings report and announced the Afterpay deal. 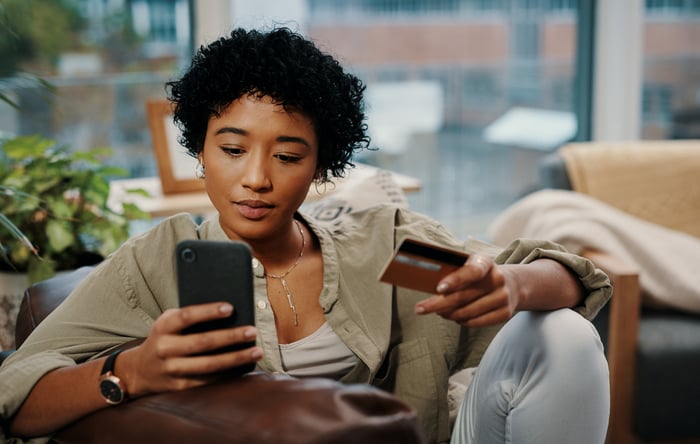 Square's takeover of Afterpay counters PayPal's "Pay in 4" BNPL service, which it launched last August. Both Afterpay and Pay in 4 let customers pay for goods in four interest-free payments, but Square plans to integrate Afterpay into both its Seller ecosystem and its rapidly growing Cash App, which already provides peer-to-peer payments, bitcoin (BTC 0.55%) purchases, and stock trading services.

Should PayPal's investors worry about Square's latest move? Or is there enough room for both companies and their other rivals to thrive in the expanding BNPL market?

Why is Square paying a premium for Afterpay?

Square's takeover of Afterpay, which will close in the first quarter of calendar 2022, initially seems pricey. It will pay nearly a quarter of its market cap -- and significantly dilute its existing shares with an all-stock transaction -- for a company that will likely only boost its 2022 revenue by about 5%.

Afterpay's revenue rose 78% in fiscal 2021, which ended in June, but Square's revenue surged 101% in 2020 and is expected to rise 102% this year. Therefore, Square seems to be paying a high premium and diluting its shares for a company that generates slower growth.

However, Square's growth in 2020 and most of 2021 was largely driven by bitcoin trades during the pandemic. If we exclude those bitcoin sales, Square's revenue only rose 17% in 2020, and analysts expect its total revenue to grow just 13% in 2022 as those cryptocurrency trades normalize.

However, they still expect Afterpay's revenue to rise 66% in fiscal 2022 -- so it could generate smoother growth than Square's volatile core business. Afterpay would also expand Square's overseas presence, since it only generates about half of its underlying sales in the United States.

Afterpay's active customers grew 63% to 16.1 million in 2021, and it serves nearly 100,000 merchants worldwide. Square's Cash App hit 40 million active customers in June, up from 36 million at the end of 2020. Merging those two high-growth platforms together -- and adding Afterpay's BNPL services to its platforms -- could significantly expand Square's ecosystem.

Should PayPal be concerned?

PayPal was already in a vulnerable position after its second-quarter revenue growth and third-quarter revenue forecast missed Wall Street's expectations. It also warned that its loss of eBay to its Dutch rival Adyen -- which concludes its three-year transition this year -- will throttle its near-term revenue growth.

That slowdown raises doubts about PayPal's ambitious plans to more than double its annual revenue by 2025, as well as concerns about its recent decision to hike its processing fees for U.S. merchants.

PayPal operates in over 200 markets worldwide, and its number of active accounts rose 16% year-over-year to 403 million in the second quarter. Its peer-to-peer payments app Venmo serves more than 50 million active users.

PayPal repeatedly cited its BNPL service as a growth engine during its latest conference call. Over seven million consumers have used its BNPL service for more than 20 million transactions so far. The service has processed more than $3.5 billion in TPV (total payment volume) since its launch, with $1.5 billion of that total processed in the second quarter alone.

That figure sounds impressive, but $1.5 billion only accounted for 0.5% of PayPal's total TPV of $311 billion during the quarter. It also reveals its Pay in 4 platform is still much smaller than Afterpay -- which generated $15.6 billion in underlying sales (comparable to PayPal's TPV) in fiscal 2021.

PayPal previously offered "pay later" options with its revolving credit line and an Easy Payments feature, but "Pay in 4" marked its first step into the streamlined, interest-free BNPL market. But it arrived late to the party -- Afterpay was founded in 2014, while its Australian rival Zip was founded in 2013.

On its own, Square's takeover of Afterpay won't derail PayPal's long-term growth. Bank of America estimates the market for BNPL apps will expand 10-15 fold by 2025, so there could be plenty of room for Square and PayPal to expand without trampling each other.

However, Square's massive acquisition of Afterpay, which instantly gives it a bigger share of the BNPL market than PayPal, highlights the key difference between the two fintech giants.

Square is consistently more daring -- as seen with its early moves in bitcoin trades, stock trades, and the expansion of its seller services -- while PayPal is more conservative. Therefore, investors should question why PayPal didn't buy Afterpay first -- and if it needs to get more aggressive to hit its lofty growth targets for 2025.