Atlantica Sustainable Infrastructure (NASDAQ:AY) continues to benefit from the growing need for infrastructure worldwide. The infrastructure company has steadily acquired assets, enabling it to grow its cash flow and 4.3%-yielding dividend. That growth has been on full display this year.

Atlantica recently reported its first-half results. The infrastructure operator produced $109.9 million of cash available for distribution (CAFD) in the first half of 2021, up 12.9% year over year. Powering the company's growth was a combination of recent investments, higher production from its renewable energy business, and changes in foreign exchange rates. 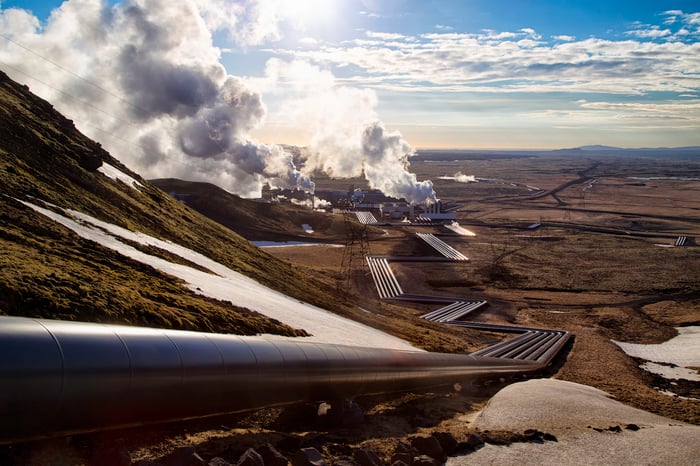 The company generated 1,948 gigawatt-hours of renewable power during the first half of the year up nearly 34% year over year. That's due to the contribution of recent investments, including closing the purchase of a wind portfolio and a geothermal energy plant during the second quarter, and better solar energy resources in the U.S. and Spain compared to the year-ago period. That helped more than offset lower production from its efficient natural gas and heat operations and lower availability from its water desalination plant due to the installation of some safety equipment at one plant in the first quarter.

A look at what's ahead for Atlantica Sustainable Infrastructure

Atlantica Sustainable Infrastructure closed three new investments during the second quarter. The biggest deal was purchasing a 49% stake in a 596-megawatt wind portfolio in the U.S. for $198.3 million. It's acquiring four wind assets that all sell their power under long-term contracts to financially strong customers. The company also closed the purchase of a 135-megawatt geothermal plant in California for $140 million. It also sells the power produced under long-term contracts to financially strong end-users. Finally, Atlantica purchased a district energy business in Canada for $22.5 million.

Those investments keep Atlantica well on track with its long-term growth target. The infrastructure company aims to invest $300 million per year on new infrastructure opportunities. That investment, along with the organic growth of its existing assets, should support 5% to 8% annual growth in its CAFD through 2024.

Atlantica didn't disclose any new investment opportunities in its second-quarter report. However, the infrastructure company has previously noted several ways to drive growth in the future. These include:

Atlantica has a healthy balance sheet to support future investments. The company ended the first half with $523 million of corporate liquidity and a corporate net debt-to-CAFD ratio of 3.4 times. It also doesn't have any significant near-term debt maturities. That gives it the financial flexibility to make new investments as opportunities arise. It should also allow the company to continue increasing its dividend.

Atlantica Sustainable Infrastructure continues to generate solid results, giving it the cash to pay an attractive dividend. Meanwhile, the company made excellent progress on its growth plan, closing three acquisitions during the second quarter. That should enable the infrastructure company to continue growing its cash flow, which should support future dividend increases. That makes it an intriguing option for investors seeking income backed by sustainable infrastructure such as renewable energy and water desalination plants.