Please ensure Javascript is enabled for purposes of website accessibility
Log In Help Join The Motley Fool
Free Article Join Over 1 Million Premium Members And Get More In-Depth Stock Guidance and Research
By Neil Patel – Aug 4, 2021 at 10:45AM

And it's another blow for the struggling retailer GameStop.

Besides being known as the poster child of the Reddit trading frenzy in 2021, GameStop (GME 1.23%) actually has a viable business primarily dealing with physical game consoles, discs, and accessories. But after sales peaked nearly a decade ago, the company has failed to keep up with the changing landscape. Video games are increasingly purchased directly by consumers on their various devices, a serious blow for GameStop.

Now Netflix (NFLX -0.07%) wants in on the action, with plans to offer mobile games as a complimentary part of its popular subscription. The $230 billion streaming giant is showing us where the future of gaming lies, and it has nothing to do with the traditional brick-and-mortar model. 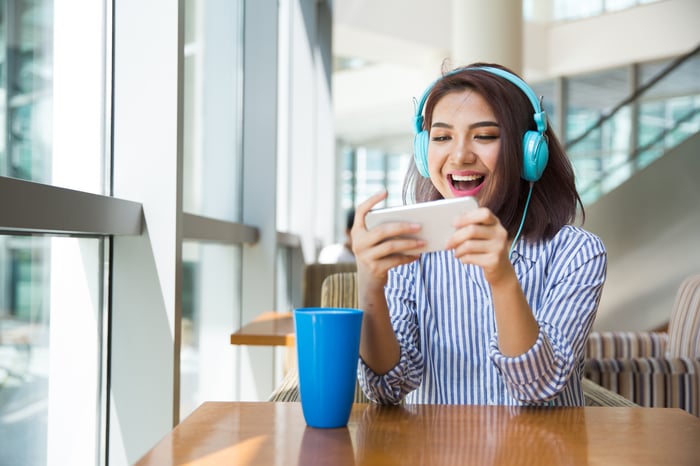 In its heyday, GameStop was the face of the gaming world. The business generated revenue of $9.6 billion in fiscal 2011, at a time when people still visited stores frequently for their needs. This was almost double what it produced in the most recent fiscal year, and mimics what many other retailers have been experiencing. In addition to having a sales cycle largely dependent on new game console releases, the company's bread-and-butter of trading in and reselling physical games became less relevant as consumers could simply download them directly online.

Further cementing GameStop's fall from grace is the extraordinary rise of mobile gaming. Before the release of the first iPhone in 2007, the gaming industry was largely dominated by handheld devices, consoles, and personal computers. Today, things look completely different, as it's estimated that more than half of gaming revenues are derived via the mobile channel.

And because people spend more time on their smartphones each year, which was accelerated by the pandemic, this trend is only becoming more pronounced. Mobile gaming revenues worldwide are expected to reach $272 billion in 2030, from less than $100 billion today. Supported by the proliferation of 5G networks, cloud and augmented reality gaming will become more important, enhancing the user experience.

These trends clearly show us where the future of gaming lies, making Netflix's recent announcement appear like a prudent strategic move. And GameStop, for the record, has not mentioned anything about entering the mobile gaming market, which is not a good sign. The company will focus on building out an e-commerce operation instead.

It's all about engagement

Netflix has brought on gaming industry veteran Mike Verdu, formerly of Facebook and Electronic Arts, to head its gaming push. While the business has made clear that this is meant to be complementary to its successful streaming operation, it signals how co-founder and co-CEO Reed Hastings plans to drive higher engagement among his company's 209 million subscribers.

You guessed it. It's by launching mobile games, where the most eyeballs are. According to Newzoo, a consulting and research firm, 2.8 billion of the world's 3 billion gamers will play on a mobile device this year. Netflix knows that its viewers spend most of their time using the service on a TV, so trying to get more of its customers interacting with the brand on their smartphones could end up being a brilliant move by management. And the timing is noteworthy. As the competition in streaming heats up and viewers have a growing number of choices, Netflix will need to do whatever it can to keep the attention on its platform.

And it's another nail in the coffin for GameStop's business. It's best to stay away from the unlikely turnaround for the troubled retailer, and instead focus on the gaming push at Netflix. The former has clearly demonstrated its lack of innovation and strategic direction, while the latter has been a forward-thinking pioneer.

The future (and present) of gaming is mobile, and Netflix knows this. While challenges will certainly come up, don't bet against the streamer's success.