Please ensure Javascript is enabled for purposes of website accessibility
Log In Help Join The Motley Fool
Free Article Join Over 1 Million Premium Members And Get More In-Depth Stock Guidance and Research
By Jamal Carnette, CFA – Aug 5, 2021 at 9:40AM

Too many investors are overlooking tech stocks for income and that's a mistake.

Investing has significantly changed in the last 20 years. At the turn of the century, technology was considered a speculative investment sector while banks were the reliable blue-chip stocks. Coming out of the dot-com bubble, very few people would have guessed that 20 years later the five largest companies in the U.S. would all be technology companies.

It could be because of this still-common belief that many income investors seem to ignore the tech sector -- to their own detriment. Granted, technology companies are not known for high dividend yields, but their cash-flow-rich business models have supported years of dividend increases.

Let's take a closer look at three tech companies that should get more love from dividend investors. 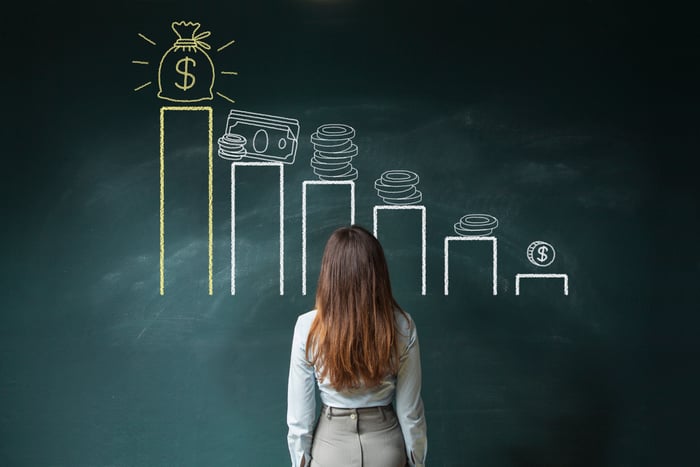 1. Microsoft's dividend is built to last

Investors can credit Microsoft (MSFT 4.17%) for leading tech's dividend revolution. In 2004, the company was "awash" in cash, according to The Wall Street Journal,  and paid out the split-adjusted per-share equivalent of $0.32 per year. That figure is now $2.24, and Microsoft has doubled the payout in the last seven years.

Microsoft is overlooked by dividend investors due to its lower yield. This is because the share price continues to outpace dividend increases as the stock has been on fire under CEO Satya Nadella. The dividend has doubled since 2014, but the stock has returned 683% since Nadella took the reins in February of that year. As a result, the dividend currently yields 0.80%, less than the greater S&P 500.

However, very few companies are primed for dividend increases like Microsoft. In addition to the company's dominance in PC operating systems, Nadella transitioned the company to next-gen applications like cloud computing and artificial intelligence. Now Microsoft's Azure is the top challenger to Amazon's cloud computing dominance. In the recent fourth quarter, revenue attributable to Azure grew 51% over the prior year.

2. Apple is returning cash on a massive scale

It's been widely reported that Apple (AAPL 3.53%) founder and former CEO Steve Jobs wasn't exactly shareholder-focused. Notoriously known as a product guru, Jobs focused most of his efforts on the end user's experience and less on stock performance or dividends.

Therefore, it was no surprise that Apple didn't pay a dividend when Jobs returned to the CEO role to turn around the company he was once pushed out of. While the attention to product development remains, current CEO Tim Cook has also put some effort into returning cash to shareholders. The company reestablished the dividend in 2012.

The payout at that time was $0.38 per share (split adjusted). Now the payout is $0.88 per share, more than doubling in nine years. Additionally, the company continues to buy back shares at a rapid pace, spending nearly $450 billion on buybacks since fiscal 2012.

The knock against Apple is the company is a hardware manufacturer and deserves lower valuations as the smartphone market becomes saturated. That's a false narrative, as Apple is now focusing on monetizing its massive installed base with higher-margin services.

The company reported an annualized run rate of $70 billion for its services as of the last quarter. If Apple's services were a stand-alone company, it would be No. 45 on the Fortune 500 list, ahead of FedEx. Look for Apple to continue returning cash to shareholders for decades to come.

3. Intel is a turnaround dividend pick

Once part of the dominant "Wintel" monopoly of the PC market (along with Microsoft), Intel (INTC 1.64%) stock has seen better days. Intel significantly underperformed the semiconductor index in the last five years, with the iShares Semiconductor ETF returning 350% versus 55% for Intel. Despite that, the company continues to raise its dividend, from the split-adjusted figure of $0.013 per year in 1992 to $1.39 per share today.

The vertically integrated chipmaker fell behind fabless chip design companies like Nvidia and AMD in the innovation race. Last year the company lost a long-standing deal with Apple to manufacture the chipsets powering Apple's Mac computers.

Intel reported a slight decline in revenue during the second quarter as demand for computers returned to normal. Despite the small decline, the company is guiding for $11 billion in free cash flow this year, more than enough to pay dividends of $5.6 billion.

The new CEO has an intriguing plan to turn around the ship. Intel is now becoming a third-party foundry, spending $20 billion to build two new foundries while announcing it will work alongside third-party fabless chip designers to manufacture their chips. While the company would prefer to win the design outright, chip manufacturing is becoming a matter of national security with the U.S. Senate approving $52 billion to boost domestic chip manufacturing (the bill has not yet been passed in the House or approved by the president). Intel is down, but certainly not out for dividend investors.