Bargain-hunting investors may want to take note of what sparked most of the recent weakness.

Like bargains? Sure you do. Why pay a higher price for something when you can purchase it at a lower price? The idea even applies to stocks.

Just because a stock is "on sale" by virtue of a lower price, however, it doesn't necessarily make it a buy. A lower-priced name is only a bargain if there's a reasonably good chance it's going to rebound better and faster than other stocks rise... even if these beaten-down stocks are the most reputable of blue chips.

With that as the backdrop, any bargain hunters eyeing last month's biggest pullbacks among constituents of the Dow Jones Industrial Average (^DJI 0.10%) may want to think twice before stepping in. There's a suspicious common thread among these tumbles that suggests the dips were more than just a little volatility.

The party is over, the hangover begins

Good investors think about a company's fiscals and scour headlines about that organization. Great investors consider context and commonalities that nobody else notices. See, context and bigger-picture undertows ultimately drive most of the market's action.

To this end, while the Dow's biggest losers for July were a highly disparate Walgreens Boots Alliance (WBA 0.41%), Caterpillar (CAT 0.19%), and Intel (INTC -1.41%), all three sell-offs have the same roots. That is, after topping last quarter's estimates, each of these Dow names offered guidance that was less than thrilling. 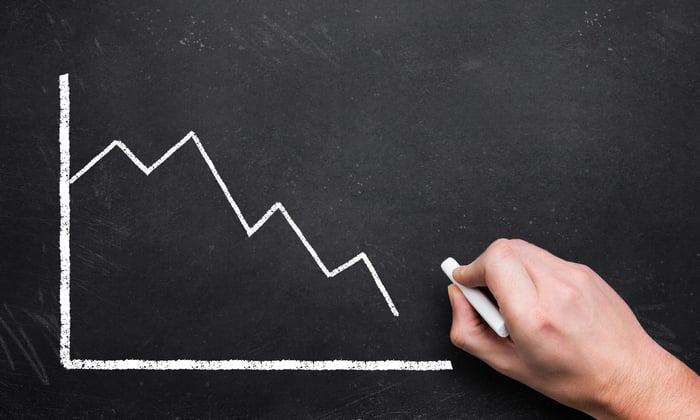 You may recall the market's knee-jerk responses to Intel's Q2 reports and guidance. The company's top line of $19.6 billion led to per-share profits of $1.28, versus analysts' earnings estimates of $1.07 per share and revenue of $17.8 billion. Guidance for $18.2 billion worth of revenue for the quarter now underway -- and its corresponding earnings of $1.10 per share -- is also better than the current consensus.

The company's outlook for the full year, however, suggests profit margins will shrink through the remainder of 2021. Intel is responding to the chip shortage aggressively, but the stock's 4.3% slide in July says investors aren't thrilled with the fiscal way the response is taking shape.

Caterpillar's story is similar, if not identical. Shares of the earth-moving equipment maker sold off with its peers in mid-July on worries of a resurging COVID-19 pandemic. Then, just when it looked as if CAT stock might claw its way back to bullish mode, the company cautioned that increasing materials and delivery costs ahead would be difficult to pass along to customers following two price hikes already put into place earlier this year. End result? A 5% setback last month, a big piece of which took shape in response to Caterpillar's acknowledgement that its profit margins would be pressured in the foreseeable future as well.

And Walgreens? It led the way lower last month with its 10.4% setback after not only topping Q2 estimates, but offering Q3 guidance that was better than expected. The market can't get past CFO James Kehoe's comment made during the Q2 conference call, though: "We are expecting solid year-on-year EPS growth in the fourth quarter, although at a slower rate than the third quarter." While the pandemic is still with us, the number of COVID-19 vaccines being administered has already peaked, crimping a key piece of the drugstore chain's recent revenue stream. Right or wrong, it upset investors. 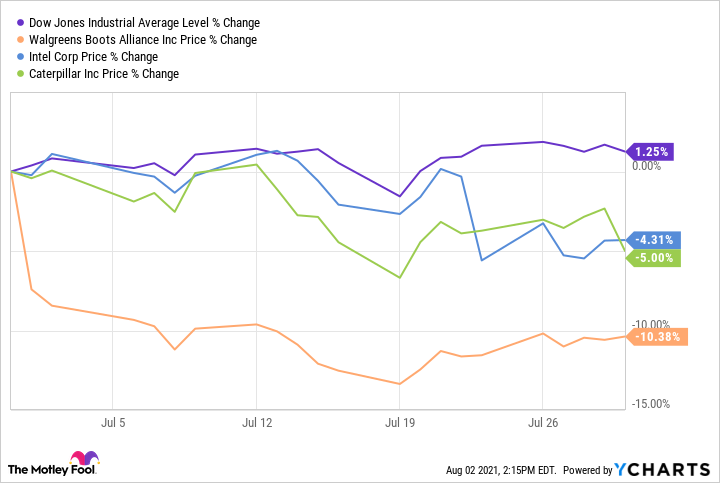 It's also worth mentioning that shares of Walgreens, Intel, and Caterpillar were among the Dow's biggest losers in June as well, suggesting the market innately knew the bullish arguments for these outfits was already weakening.

Do note that Dow component Boeing (BA 4.03%) tumbled 5.4% last month, but that's hardly news or noteworthy. Yet another technical concern with the 737 MAX as well as the spread of the new delta variant of COVID-19 are the key culprits of the setback. The aircraft maker's woes are real, but not surprising.

Investors should take the collective warnings from these (and other) blue chip names seriously, as well as June's downtrends leading into these warnings.

Were it just one company saying the foreseeable future isn't quite so bright, it could be chalked up to sandbagging. When a bunch of blue chip companies are all pointing to similar fundamental and economic problems, though, it's a clue that something bigger is happening.

In this case, what's happening is a hangover following a stimulus-driven recovery from a recession prompted by the pandemic. It was fun while it lasted, but the next chapter isn't going to be as much fun now that we're facing strong inflation in an economy that's still not firing on all of its pre-pandemic cylinders.

None of this makes Walgreens, Intel, and Caterpillar poor companies, mind you. But it might be smart to steer clear of these Dow stocks until we stop hearing them voice the same worries about the economic environment.

3 Stocks That Could Soar if We Get Tax Reform
376%