They're making inroads on delivering behavioral health from afar.

Telehealth is one of the hottest areas at the intersection of healthcare and technology. And with the global pandemic still afoot, there's a stronger incentive than ever for people to avoid crowded areas by accessing healthcare from afar to the extent that they can.

Unsurprisingly, the telehealth gold rush hasn't stopped in 2021. With more companies entering the space and several early leaders showing their strength, it's probably worth keeping an eye on a few of the contenders. Both of the stocks I'll discuss have already rewarded their early investors, but it looks like they have plenty more where that came from. 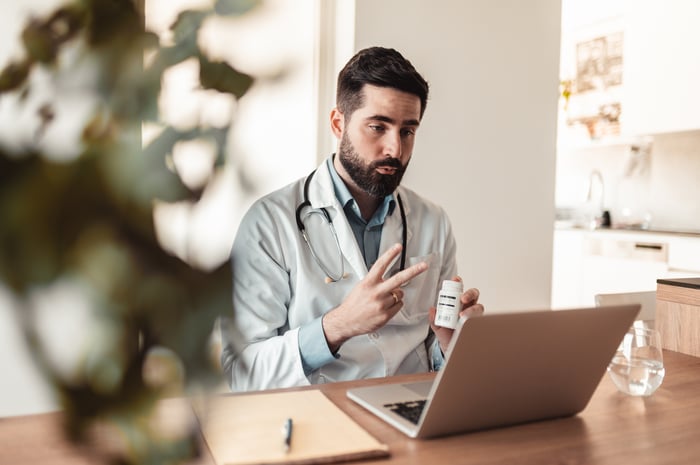 Teladoc Health (TDOC 0.69%) belongs on your watchlist because there's a good chance that it's going to continue its streak of successes in a brand new market. In case you haven't heard, the telemedicine company's second-quarter results from July 27 marked burning hot growth of 109% compared to Q2 of 2020. In short, people are continuing to use Teladoc's services to get primary medical care from a distance, and its membership base is still expanding. If that's not exciting enough to warrant a spot on your watchlist, read on.

There's one area in particular that Teladoc is positioning itself to conquer which could drive its growth for years to come: mental health. Last quarter, it launched a mental health service called myStrength Complete for some of its subscribers covered by medical insurance. Right now, the company's behavioral clinicians can prescribe medications, so making a new business unit to provide patients with teletherapy isn't a stretch.

If Teladoc plays its cards right, it could become a one-stop shop for insured patients seeking treatment for mental illnesses. That would enable it to capture a significant amount of the highly fragmented market for behavioral health, something which no other competitor has been able to do so far.

But, as I'll discuss in the next section, there will definitely be a showdown between telehealth providers at some point in the future, when the digital behavioral health market starts to get crowded. And when that happens, Teladoc's substantial and growing fixed commitments to providing primary care might turn into cumbersome overhead rather than a competitive advantage.

So for now, even if you weren't convinced of Teladoc's merits before its foray into mental health, it's worth adding to your watchlist to see how the market will respond over the coming quarters.

Talkspace (TALK -1.47%) is a digital behavioral healthcare pure-play that offers customers a full range of mental health services, including both psychiatry and psychotherapy. Like Teladoc, it sells its services to insurance plans, large businesses, and directly to consumers. In my view, this stock belongs on your watchlist because it has a chance of doing behavioral telehealth better than Teladoc.

Born from a merger with a special purpose acquisition company (SPAC) that brought it public on June 23, Talkspace is still in the early stages of its growth story. It expects to make $125 million in 2021, which could grow its annual revenue as much as 64% compared to 2020.

So far, it looks like Talkspace has a highly cohesive and integrated approach to digital mental health services, which is something that Teladoc lacks in comparison. In particular, the company is working on a suite of self-service tools that patients can use when they're not directly engaged with a care provider. These tools could include adjunct therapies like yoga or meditation, which could improve the outcomes in a variety of different ailments.

More excitingly, Talkspace could use its self-service platform to be a distribution platform for "homework" assignments from its therapists in the form of worksheets, journaling, or other individual exercises. That'd make its mental healthcare offerings significantly more comprehensive and perhaps more effective than the competition's. At the moment, most of the company's programs are in development, though that hasn't stopped its ranks of subscribers and providers from growing rapidly.

The reason this stock deserves to be on your watchlist rather than on your "buy it" list is because Talkspace's business model hasn't delivered a positive profit margin yet.

If it can continue to grow at its current rate, it'll be burning its cash down without any plan to stem the losses. While it's true that profitability can come later and the stock might be lucrative to own well before that, more conservative investors might still be leery. And with a powerful competitor like Teladoc in the mix, it might pay to wait and see which one of the pair looks like it'll come out on top.