The once-popular meme stock has been struggling of late and needs to give investors a reason to buy its shares again.

Sundial Growers (SNDL 8.68%) stock has been tumbling over the past six months, with a 29% decline that's only slightly better than the benchmark Horizons Marijuana Life Sciences ETF's 32% loss during that time frame. Now that the meme hype is over and the excitement has waned, investors simply don't have much of a reason to invest in the Canadian cannabis producer.

The many uncertainties in its business make this company a risky buy. Sundial is in the midst of a transition and is undergoing many changes, making it difficult to evaluate whether it is a worthwhile investment. However, focusing on two key things in the company's upcoming earnings report -- which Sundial will release on Aug. 12 -- could help investors determine whether it's a good idea to take a chance on the pot stock. 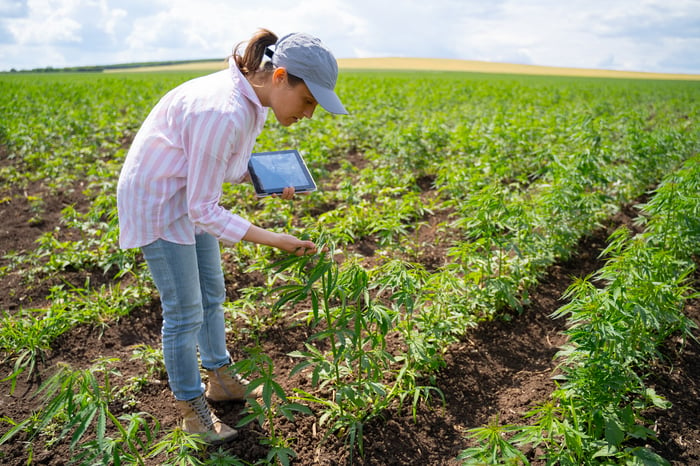 1. The effect of recent acquisitions and investments

Sundial has been busy wheeling and dealing this year. And while acquisitions and investments can give investors hope for a company's growth in future periods, they can also create uncertainty. Sundial, for instance, is now one of the top retail cannabis companies in Canada thanks to its acquisition of Inner Spirit earlier this year. Inner Spirit owns the Spiritleaf brand, which as of May 5 (when Sundial announced the deal) had 86 retail cannabis stores across the country and aimed to reach 100 as quickly as this summer.

Then there's Sundial's investment in an edible cannabis company, Indiva, that could alter its strategy even further. The move shows that Sundial could be taking more of an interest in edibles, especially given that it increased its stake in extraction company Valens earlier this year to more than 10%.

For now, there are still question marks about how all of these moving parts will work together. Sundial could just be attempting to diversify its business, or it could be aiming for leadership in one or more of these areas. Without some updated guidance, it can be difficult to determine Sundial's plans, which would undoubtedly make it difficult to assess its prospects for both growth and profitability.

It will help investors to know just how much money these investments and acquisitions are contributing, whether they are dragging down the company's margins or helping Sundial stay out of the red. Its first-quarter results for the period ending March 31 marked the first-ever period in which Sundial reported an adjusted earnings before interest, taxes, depreciation, and amortization (EBITDA) profit.

There's also the question of how much money the company has left today after making these deals, especially because I wouldn't be surprised if Sundial pursues more acquisitions in the future. As of May 7, Sundial reported that its unrestricted cash balance totaled 752.7 million Canadian dollars. In addition to investments draining its cash, the company also still needs to bankroll its existing day-to-day operations, which are in the midst of some changes themselves.

2. How its transition to branded cannabis is going and whether margins and revenue are improving

The biggest negative likely holding investors back from investing in Sundial is that the business simply isn't doing that well. Sure, there is lots of potential with the recent moves that it has been making, but its core operations right now don't look all that great. Net sales of CA$9.9 million in Q1 were down 29% from the previous period, and its gross margin was negative (due to "price compression" and higher operating costs).

But even if we ignore that quarter, the company's performance last year wasn't all that inspiring either. For the full year of 2020, its net revenue of CA$60.9 million was down 4% from the previous year, and its gross margin was just CA$9.2 million, or 15% of its top line.

Sundial has been transitioning from wholesale toward branded sales, and that can buy the company some time to explain why its revenue is underwhelming. But investors could quickly lose patience if the company doesn't start to show some forward progress. It will be paramount for the business to show some growth in Q2. The Canadian pot market has been growing, and May was a record month in which revenue topped CA$313 million. Sundial will need to show that it can capture some of that.

Should you buy Sundial's stock if the earnings report looks good on both of these fronts?

If Sundial does show progress in Q2 in significantly growing sales (I'd say by at least 25% from the previous quarter, given how low the numbers were) and staying in the black, and provides some promising guidance or numbers from its recent acquisitions, then it could be worth investing in the company. But the projections would need to be significant, because based on analyst expectations, Sundial is trading at a forward price-to-sales multiple of 34 -- which is a ridiculous premium compared to other Canadian pot stocks: 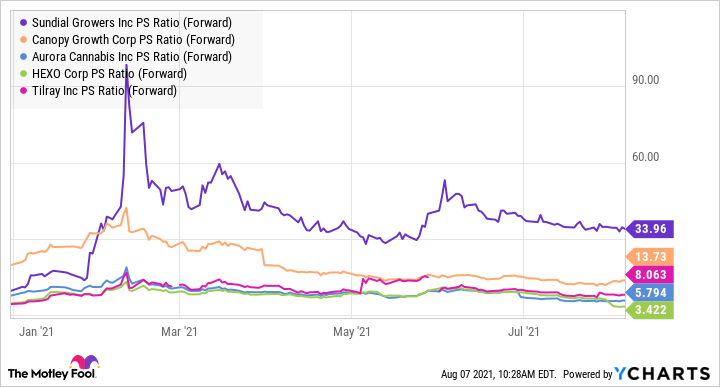 Right now, there is simply no reason for Sundial to be worth such a high premium compared with its peers. While the company does have the potential to become a much better buy after the dust settles from its ongoing transition and these recent investments and acquisitions, it's still far too risky to buy today. And I don't expect that will change after its upcoming earnings report.