While it may seem like time flies by, a decade is a long period. Think about all the changes that have occurred in your own life and the larger world -- some for good and others not. Since 2011, the economy emerged from the Great Recession and began expanding. Then, COVID-19 struck, dealing devastating effects to people's health and the economy.

While few could have predicted a global pandemic, retailers that fail to adapt to a changing climate or consumer preferences run into trouble. There have been well-known and once popular retailers such as Sears Holdings, J.C. Penney, Neiman Marcus, and Toys R Us that have filed bankruptcy in recent years.

The industry continues to undergo a dramatic transformation as more people shop online, and the threat of Amazon (NASDAQ: AMZN) hangs over participants. Fortunately, you can find retailers that continue to confront whatever comes their way through simple businesses and strong execution.

With these two stocks, you can remain confident that they will likely not only survive but thrive in the next 10 years, no matter what comes their way. 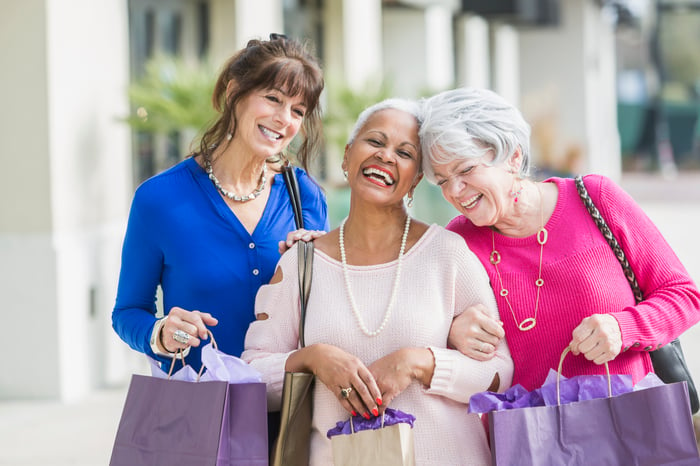 Costco (COST 0.17%) is known for selling oversized quantities in its large warehouses. But the experience is much more. The company offers high-quality merchandise and services to members at attractive prices. The approach continues to retain and attract members, who don't seem to mind paying an annual fee for the right to access Costco warehouses.

Its renewal rate continues to hover around 90% while also continually adding new members. Costco ended last year with 58.1 million paying members, up from 47.6 million in fiscal 2016. The company's year ends around the end of August. By the end of the third quarter, the number grew to 60.6 million.

But Costco isn't merely adding members without regard for the bottom line. Its fiscal 2020 diluted earnings per share were $9.02, 69% higher than fiscal 2016's figure. This year was more of the same, with earnings coming in at $7.51 a diluted share for the first nine months compared to last year's $5.89.

While there's no guarantee the company will keep paying them, Costco has gotten into the habit of declaring large special dividends every two to three years. The last one was in December when it paid $10.

Its dividend yield is 0.7%, which is lower than the S&P 500's 1.3%, but this doesn't count the special payments. Additionally, Costco has raised its payouts annually since its first dividend in 2004. This includes boosting May's payment by 13% to $0.79.

Walmart (WMT -0.52%) has a well-earned reputation for charging low prices. In fact, competitors find it difficult to undercut what the company charges for items. That's because the mantra of keeping costs down to pass these savings along to customers is ingrained in its culture. After all, it opened its first discount store almost 60 years ago.

Add in that Walmart is constantly innovating, opened its first e-commerce site more than 20 years ago, and continues to push innovation that focuses on customer convenience and faster delivery. Last year, in a move to counter Amazon, it launched Walmart+. This is its subscription program, which includes shipping, gasoline discounts, and a faster checkout process at the stores.

Management expects to spend $14 billion on capital expenditures this year, a 40% increase, focusing on items like the supply chains, automation, and customer-facing initiatives. This should allow Walmart to not only remain relevant in the coming years, but to compete with online rivals.

It is also keeping an eye on profits while looking toward the future. Last year's adjusted operating income rose by over 9% to $23.4 billion. This year, management expects a high-single-digit percentage increase, revising its estimate from its prior flattish expectation.

In terms of dividends, the board of directors has increased them annually since its first payment in 1974, making Walmart a Dividend Aristocrat. The company modestly increased dividends this year by a penny to $0.55 a quarter. The dividend yield is 1.5%. It is good to know that Walmart is investing in the future while continuing to raise dividends.

Retail is a competitive business, but Costco and Walmart have positioned themselves well to continue succeeding by focusing on their customers' wants and needs. It is a simple concept that will continue to reward shareholders over the next decade.