It's not just about growth.

Earnings season can be overwhelming. Company after company delivers a flood of numbers and shares often move up or down violently. It's often hard to separate what's really happening in the business from the movement of the stock price.

Revenue and income numbers are always the go to explanations of Wall Street's reaction, but it's important to dig deeper. In preparing for Upstart Holdings' (UPST -0.41%) earnings this week, I'm excited for updates in three areas that should offer clues as to the long-term potential of the machine-learning based lending platform. If you are focused on the business, a high conversion rate in its marketing channels, progress in auto lending, and customer diversification are a lot more important than red or green arrows following the earnings release. 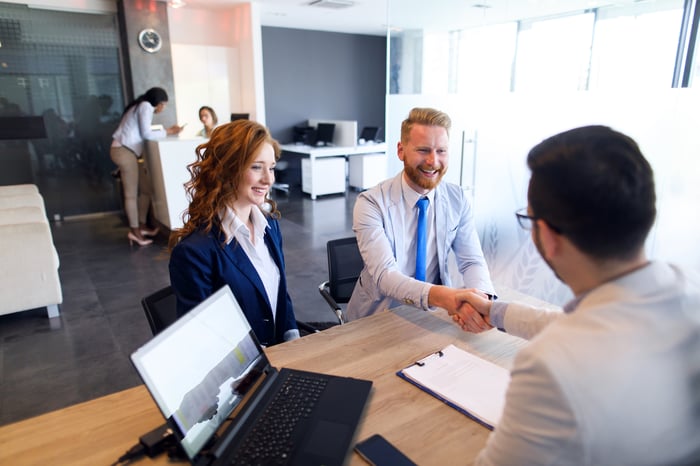 Front and center will be the performance of the company's core personal loan business. Upstart's platform has allowed its banking partners to offer credit to many who were previously unable to get it. Not only has it increased approval rates, it lowered the average interest rate for those borrowers without increasing default rates. Everyone wins. Banks get more customers, consumers get the loans they need, and Upstart gets paid for making it happen.

Its banking partners originated nearly 170,000 loans worth $1.73 billion in the first quarter. That's about $10,200 for the average loan. Those numbers are worth watching. What may be more important is the conversion rate -- the number of transactions divided by the number of inquiries received. Management pointed to reduced friction in the application process along with a better model for customer acquisition as the reasons conversion climbed from 14% in the first quarter of 2020 to 22% in 2021. That's an astounding jump. If it can remain high while transaction volume continues expanding, it means hypergrowth isn't likely to end anytime soon.

2. Proof of expansion in auto lending

CEO Dave Girouard has emphasized auto lending as Upstart's next big opportunity. He cites its size -- six times that of personal loans -- as well as inefficiency and mispricing as reasons. He has also said the company is expanding in the space faster than it did in personal lending. To top it off, Upstart closed its $100 million acquisition of Prodigy Software, a company it called the Shopify of auto dealers. The numbers will need to back all of that up.

In the first quarter, Girouard said Upstart was offering auto refinancing in 33 states representing two-thirds of the U.S. population. At that point, the company was only marketing the service to a small group so it could test and refine the product. Consumers couldn't even access it on its upstart.com website. They can now. And management has promised significant investments in Prodigy's technology and go-to-market teams. Proof of continued penetration of the auto market will go a long way toward convincing shareholders to ignore those expenses in the short term.

At the end of 2020, Upstart had 12 banking partners. One of them, Cross River Bank, accounted for 67% of loans and 63% of revenue. That's about as much customer concentration as you are ever likely to see from a public company. Those numbers were down from 81% and 79%, respectively, at the end of March 2020. Anyone who held shares of Apple suppliers Invensense or GT Advanced Technologies when they collapsed understands how relying on one customer for a large percentage of revenue can be dangerous. Thankfully, Upstart continues to move in the right direction.

As for sourcing its loan applicants, a significant risk exists there also. More than half of the consumer loan applications were derived from Credit Karma, a loan aggregation site owned by Intuit. Although they have an agreement, it does not require the site to offer loans from Upstart's partners. Further complicating matters, management shared in the first quarter filing that Credit Karma was directing traffic to a program with competing offers -- one Upstart doesn't participate in. you would be forgiven if you didn't notice. Revenue still jumped 90% year-over-year.

The company has announced a few customer additions since that first quarter earnings report. But investors will be eager to hear of any updates that prove its dependence on one particular banking partner or marketing channel is declining. Whichever direction the stock moves after its earnings come out, look for updates in these three areas to understand whether the business is on track to achieve long-term outperformance.