Please ensure Javascript is enabled for purposes of website accessibility
Log In Help Join The Motley Fool
Free Article Join Over 1 Million Premium Members And Get More In-Depth Stock Guidance and Research
By Justin Pope – Aug 3, 2021 at 9:19AM

Here is what matters for Upstart's upcoming quarter.

Lending technology company Upstart Holdings (UPST -1.35%), which uses artificial intelligence to determine consumers' ability to repay loans, is getting ready to report its second-quarter earnings for 2021 on Aug. 10. Investors are looking to earnings to push shares higher again after the stock has fallen 37% from its highest price this year. Here are three crucial things for investors to focus on when Upstart reports.

Upstart has reported two quarters since going public in December 2020, beating revenue estimates both times, by 18% in the fourth quarter of 2020 and 5% in the first quarter of 2021. As a newly public company, investors are looking for a track record of how the business performs against expectations.

Upstart continually beating analyst estimates could signal its ability to perform at a high level. The revenue beats can compound over time, leading to a stock growing into its valuation faster. 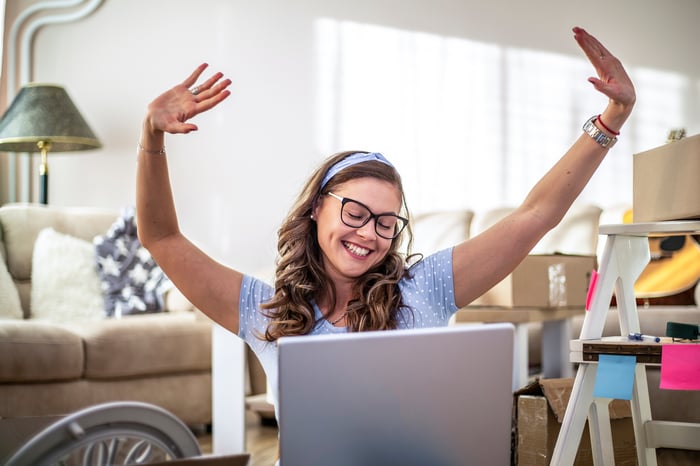 Another revenue beat could cause management to raise guidance for the full year once again. It was raised 20% last quarter, moving from $500 million for the year to $600 million.

2. Is artificial intelligence getting smarter?

Upstart uses artificial intelligence to determine the creditworthiness of consumers, replacing the traditional FICO score from Fair Isaac. The platform learns and gets better as it analyzes more data over time, which proves its effectiveness, attracting new lending partners.

Upstart reviewed 31,000 loans in Q1 2019, converting 11% of them into loan transactions. In Q1 2021, loans have increased to 170,000, and the conversion rate has doubled to 22%. Upstart is approving more loans, and the company's internal studies have estimated it has 75% fewer defaults than traditional bank systems with the same approval rate.

In other words, more people are getting access to credit, and banks are still getting repaid, a winning outcome for everyone. Additionally, Upstart has been able to automate an increasing amount of loans, which saves banks money by taking the labor out of human-driven loan processing. Back in Q1 2017, the platform automated just 18% of loans, but it has been 71% automated over the past two quarters.

Investors should be keeping an eye on these key operating numbers, looking to see that Upstart is reviewing more loans, converting a higher percentage of them, and automating more often.

Upstart's growth strategy consists of partnering with more banks and expanding on the type of loans it analyzes. Since Q1, Upstart has announced several developments, including expanding its partnership with Customers Bank, a new partnership with Telhio Credit Union, and its formal launch with Associated Banc-Corp.

It takes up to 15 months to onboard banks with Upstart's platform. Hence, a new bank partnership has several stages, including agreeing to partner, testing, launching, and expanding across the bank's lending business. Investors will want to monitor these developments to see that customers are coming on board and then expanding, signs that Upstart's services provide value to its customers.

Similarly, the company is integrating Prodigy, an automotive retail software company, after acquiring it in March for undisclosed terms. Upstart is expanding beyond personal loans and into automotive financing, originating AI-enabled vehicle loans through dealerships across the U.S. This remains in the early stages for the company, so investors could get an update during earnings on how things are progressing.

The stock currently trades at a price-to-sales ratio of 15.8, which seems inexpensive considering management's 2021 revenue guidance signals 157% growth over 2020. Upstart is also expected to be profitable this year; analysts estimate full-year earnings per share of $0.62.

Upstart is a profitable and rapidly growing business with room to grow over the long term. With more than 5,000 banks and credit unions in the U.S., Upstart is just getting started. The risk in Upstart comes down to whether the company can execute on these opportunities, and investors could get some fresh updates when Upstart reports on Aug. 10.