HCA is navigating stormy seas during a time of consolidation.

In December 2020, consulting and audit firm Deloitte published an update of findings from an analysis of recent mergers and acquisitions (M&A) in the healthcare industry. One conclusion was that the rate of consolidation would increase at a rapid pace, which it did. From 2014 to 2018, the revenue of the top 10 healthcare systems grew by 82%; for the rest of the market, that number was only 47%. Today, those top 10 healthcare systems own 24% of market share, supported by revenue growth that's double that of the smaller systems.

One of the companies playing its part in the consolidation is HCA Healthcare (HCA 0.23%). HCA is the top-ranked healthcare system by total annual net patient revenue ($44 billion), and it has made 10 acquisitions in the last five years. But those acquisitions have not been without challenges -- most recently, multiple physician departures from hospital systems acquired by HCA. Are they enough to offset the stock price's recent stellar growth? 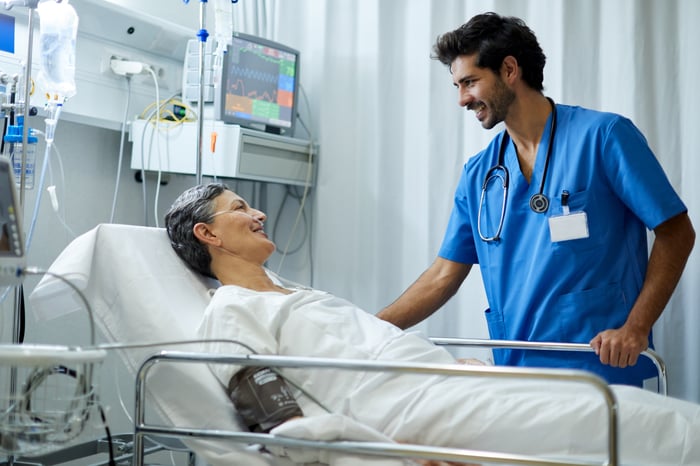 Trouble in the South

HCA's largest acquisition came in 2019 when it acquired North Carolina-based Mission Health for $1.5 billion. In that acquisition, HCA obtained seven hospitals across western North Carolina. The majority of hospitals continue to be managed under the Mission Health brand, but HCA controls operations and capital access, as well as the management of research and clinical trials.

One of the most notable changes for Mission Health upon being acquired is that the system is now part of a for-profit company, whereas in the past it was a nonprofit organization. As a nonprofit, Mission Health operated in the best interest of the public, designed to reinvest all monies back into the organization and community it serves. It also had a tax-exempt status from the IRS. As a for-profit company, owned and operated by HCA, it is now responsible for corporate taxes, and the business model is aimed toward making money for HCA owners and investors.

Some believe those differences are at the root of recent physician departures. Since the acquisition, 55 physicians either have left or plan to leave Mission Health. Some of the doctors who have left have chosen to stay local, but are now employed by other medical care centers. And many patients have departed with them, choosing to stick with their doctors.

The large number of departures caught the attention of county leaders, who wrote a letter to the attorney general claiming that physicians are leaving because of changes made by HCA as it relates to "the method of compensation in the hiring contract." Based on feedback from one physician, the new contracts offered 10% to 25% less pay.

In April, an independent monitoring firm was brought in to oversee HCA's compliance with the terms of the sale and to track how the company is living up to its obligations to provide emergency, acute medicine, and surgical services. The concern on the part of Mission Health is that the number of physician departures will make it impossible to meet its commitments to benefit the community with quality care. However, the monitoring firm will not be reviewing physician employment and primary care services.

Two sides of a coin

Unfortunately for HCA, the trouble with physician departures has not been limited to Mission Health. In July it was reported that 86% (12 of 14) of primary care physicians at Frisbie Memorial Hospital in New Hampshire have left or are planning to leave. HCA acquired Frisbie in March 2020, early in the COVID-19 pandemic, which caused movement to be restricted, businesses to close, and doctor appointments to be canceled.

Some could argue that without the support of HCA, smaller healthcare systems such as Frisbie may not have made it through the pandemic. The rate at which smaller hospitals (by number of beds) are operating at negative income increased by 6% from 2015 to 2019, to 75% total. During the pandemic, this financial distress became more emphasized as income-generating surgeries and other services were canceled or indefinitely postponed.

Under new interim CEO Matt Larkin, HCA is looking to fulfill its commitments to invest in the buildout of Frisbie Hospital through new physician recruitment, rooms, boiler systems, and a pharmacy. Larkin has said he believes the departure of physicians is "a perfect storm of events that just happened." He went on to state that he believes that once the hospital is reorganized, some of those physicians will want to return.

The impact on HCA's bottom line

The departure of physicians, and the resulting turbulence within HCA-owned hospitals, is ultimately a minor reason for concern among investors. That said, if we see a conclusive review from the independent monitoring group at some point during the third quarter that HCA is not complying with its commitments for Mission Health, there could be further fallout. We might also see continued physician departures at other hospital systems owned by HCA.

For now, from an investor's point of view, HCA is strong. Second-quarter results reported in July show 30% revenue growth and 38% earnings-per-share growth compared with the second quarter of 2020. The company also announced a quarterly dividend payout of $0.48 per share to shareholders of record as of Sept. 16. It also repurchased 11 million shares of its stock, which is often a sign that a company believes the share price will continue to move upward.

As if those aren't reasons enough to believe HCA is on the right path to gains for investors, the company also raised its full-year guidance by 4% for total 2021 revenue, and by 21% for earnings per share. Simply put, business is booming, and there are no signs that turbulent relations with some physicians will seriously hurt this healthcare powerhouse.