It was a solid if unsurprising update. What were investors expecting?

Shares of electric heavy-vehicle start-up Hyzon Motors (HYZN -1.12%) were trading lower on Wednesday, after the company reported a not-surprising loss for the second quarter and said it has begun deliveries of its vehicles in Europe.

In an earnings announcement released before the U.S. markets opened on Wednesday, Hyzon said that it had a net loss of $9.4 million in the second quarter, or $0.10 per share — and that it expects to begin booking revenue in the current quarter.

Few if any Wall Street analysts have begun covering the company, which went public via a merger with a special-purpose acquisition company last month, so it's hard to tell if that was a "surprise" in the Wall Street sense. But the loss doesn't seem surprising to me, given that the company is only now — in the third quarter — beginning deliveries of its first hydrogen-fuel-cell trucks and buses to customers. 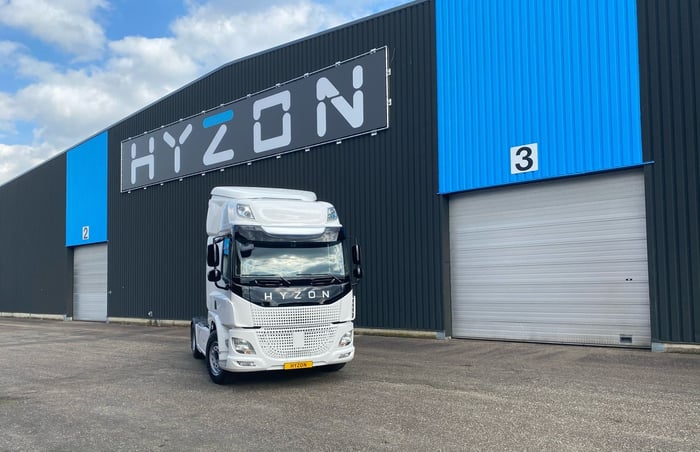 Hyzon's Dutch factory has begun delivering fuel-cell electric trucks to customers in Europe. Two more Hyzon factories, both in the U.S., will begin production over the next year. Image source: Hyzon Motors.

CEO Craig Knight emphasized to auto investors that Hyzon has made significant progress on its business plan over the last few months, winning a slew of preorders and hiring a senior executive to lead the buildout of its planned hydrogen refueling network.

And again, this company is actually shipping actual vehicles! That not only puts it ahead of green-truck rivals like Hyliion (HYLN 1.00%) and Nikola (NKLA 9.62%), it also means that Hyzon is generating revenue, right now. It probably won't be a lot of revenue until the second half of next year, but it's a lot better than none.

So why is the stock down today? It might be a case of "buy the rumor, sell the news," with traders unloading after the company's earnings announcement had no big surprises. But I can't see a good reason for the sell-off -- which, if you like where the company is going, might be an opportunity.

In another unsurprising-but-still-good development, Hyzon confirmed its prior sales guidance for the full year. It still expects to deliver a total of 85 vehicles, including several varieties of heavy trucks and buses, by the end of 2021.

For now, those vehicles are being built at Hyzon's facility in the Netherlands for delivery to customers in Europe and Australia. Hyzon is completing another plant, in Chicago, that will begin production for U.S. customers in the fourth quarter. A third factory, under construction near Hyzon's headquarters in Rochester, New York, is on track to start production in the second quarter of next year.