Over the past few years, issues between the two largest economies, the U.S. and China, have seemed to intensify. Both countries naturally want to protect their own interests while seeking greater influence over the rest of the world.

Although many large American tech giants are having problems tapping the Chinese market, Nike (NYSE:NKE) and Starbucks (NASDAQ:SBUX), two U.S. consumer darlings, have depended and will continue to depend on the Asian nation for much of their growth going forward.

And that's not a bad thing. 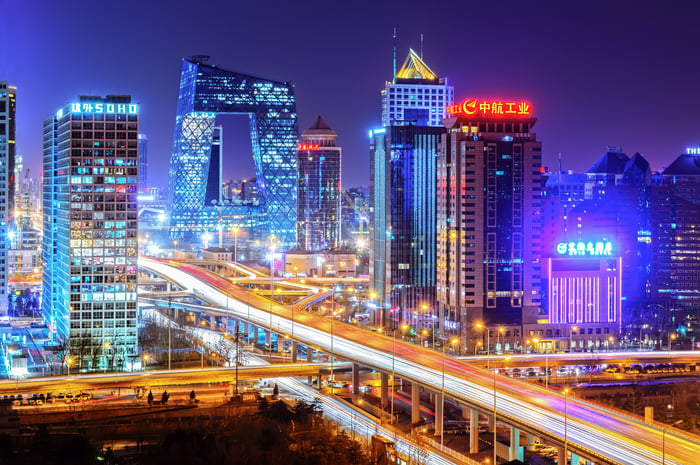 Riding the popularity of basketball

Nike has been selling its popular footwear and apparel in China for more than four decades, as founder Phil Knight correctly identified the massive opportunity early on. Fast forward to today, and Nike is now the biggest athletic brand in the country. It's proof that the love of sport is a global phenomenon, something that won't change anytime soon.

Nike's success in China can also be attributed to the growing popularity of basketball there. The NBA (National Basketball Association) is watched by a growing number of fans worldwide. Megastars like LeBron James and Kevin Durant, who both have endorsement deals with Nike, are lucrative brand ambassadors. According to the NBA, it is estimated that a remarkable 500 million people in China watched games in 2018. And some 300 million actually play basketball.

The Greater China business segment has been Nike's fastest-growing for quite some time, and it's still the case. During fiscal 2021 (ended May 31), revenue in Greater China increased 24% from the previous year. This clip bested Nike's other geographic regions. In the 12-month period, Greater China accounted for 18.6% of overall company sales, up from 11.7% five years ago.

Looking ahead, expect much of the same to continue. Nike CEO John Donahoe is extremely optimistic about his company's prospects in the nation. "With respect to Greater China, while marketplace dynamics still exist, we are optimistic that we can continue to grow low-to-mid-teens over the long-term. We remain committed to investing in the local consumer experience and inspiring the next generation of athletes in China," he highlighted on the earnings call.

Focusing on building a premium consumer experience, along with the planned opening of a new digital technology center in Shenzhen, will bolster Nike's already powerful position in China.

The love of caffeine is universal

Starbucks opened its first store in Beijing in 1999, and the rest is history. Various cultures all over the world have a love affair with caffeine, and although the country enjoys it in tea form, China is no different. Starbucks now has a whopping 5,135 stores there, second only to the U.S. And by the end of fiscal 2021, Starbucks will have opened 600 net new locations in China, which is more than half of the 1,100 the business is opening overall during the year.

Unlike many tech companies that are banned from China over security concerns, Starbucks doesn't face that issue. The business is thriving by offering consumers just what they want, however they want. Like Nike, Starbucks' management cites its digital prowess and customer engagement as a key competitive strength.

Management is expecting same-store sales growth of 18% to 20% for this full fiscal year in China, down from previous guidance. But CEO Kevin Johnson isn't shying away from the importance of this lucrative market going forward.

"There should be no misunderstanding of how big and robust our business in China is and will be. These are still early days, and our strategies are clearly working. Starbucks is uniquely positioned for success in China well into the future," he said on the Q3 earnings call.

These two consumer favorites are already ubiquitous in the U.S., but China will be where most of the growth comes from in the years ahead. Nike and Starbucks have built successful businesses by leaning on the world's love of sport and caffeine, respectively. This transcends borders, even one as guarded as China's.

And in a nod to how business is conducted these days, both companies are propelling their operations by improving the consumer experience in the Asian country. It's best not to bet against Nike or Starbucks.