The virtual-care leader's fortunes could be linked to what happens next with COVID-19 -- at least, for now.

Moderna (MRNA -1.36%) and Teladoc Health (TDOC -3.84%) might not seem to share much in common. One develops messenger RNA (mRNA) vaccines and therapies, while the other ranks as a leader in virtual care. However, in some ways, the fortunes of these two companies are intertwined.

Both Moderna and Teladoc really hit their stride last year due to the COVID-19 pandemic. Moderna, of course, became a favorite for investors as it achieved amazing progress on developing a COVID-19 vaccine. Teladoc became a big beneficiary of the pandemic as millions turned to virtual healthcare visits.

Even now, there's a not-so-visible but definite link between the fates of these two companies. So when Moderna's management laid out a potentially worrisome scenario in the company's recent second-quarter conference call, Teladoc investors should have taken note. Here's why Teladoc stock could soar if Moderna's scary prediction comes true. 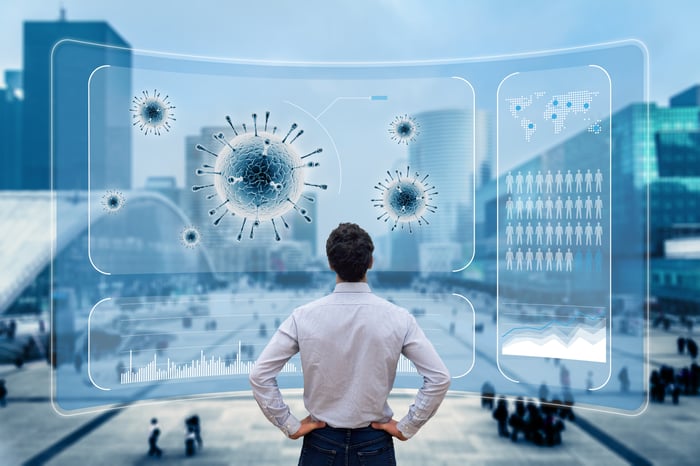 I'm not trying to be an alarmist by using the word "scary" to describe the potential scenario that Moderna president Stephen Hoge discussed in the company's Q2 call. I'm using Hoge's own description.

Hoge was asked by an analyst during the call about how the coronavirus might mutate and evolve. He responded:

If you think about how this might play forward, it seems logical to us that those three mutations present in the beta, gamma line, and those two mutations present in the delta might find some way to combine in new and potentially scary ways. And if that came with the increased transmissibility, force of infection that delta can achieve, that might be a significant threat.

It's important -- and at least somewhat reassuring -- to understand the context surrounding Hoge's comments. While he acknowledged the reality of the potential threat from new variants, he also stressed that Moderna believes that its program to develop a multivariant mRNA vaccine could provide a way to address this threat.

However, Hoge added: "Hopefully, it's not as big of a threat as we're seeing right now. But we need to be cautious and humble because SARS-CoV-2 keeps surprising us." That seems to me to be the correct stance to take.

How does Teladoc fit into the potentially scary future that Hoge described? My view is that anything close to the scenario that the Moderna president laid out would provide a surefire catalyst for Teladoc's shares.

Hoge talked about the potential for "a significant threat" resulting from the current coronavirus-variant mutations combining to become more contagious. If this threat materializes, it's likely that many people would choose to limit their going out -- even if governments didn't reinstate lockdowns. I suspect that would especially apply to doctors' visits since there could be a greater chance of being infected in the scenario Hoge discussed.

Teladoc's shares soared last year in a similar environment. The healthcare stock has fallen around 50% below its peak in 2021, though, in large part because investors are concerned about the company's slowing membership-growth rate.

It's a pretty safe bet that Teladoc's membership would again surge if the picture laid out in Moderna's Q2 call becomes reality. Indeed, I would expect that every key metric for Teladoc would improve significantly with an even more troubling coronavirus variant on the scene.

Hoge didn't predict that more deadly coronavirus strains than the delta variant were inevitably on the way. He aptly used the word "scary" in his description of the possible COVID-19 scenario. However, Hoge also stated that Moderna anticipates that the most likely path forward will be similar to other respiratory infections -- recurring, requiring annual vaccinations, but not catastrophic.

This might mean that Teladoc Health isn't in store for a huge catalyst. I don't think there's anything to worry about with the virtual-care company's future, though.

The potential market for virtual care, including telehealth and chronic disease management, is huge. Teladoc remains the leader in this market. Its focus on whole-person virtual care should give the company a solid competitive advantage versus rivals.

Over the near term, Teladoc's stock performance could continue to be linked to what happens with COVID-19 (and by extension, with Moderna). Over the long term, though, my view is that Teladoc will be a winner without having to rely on coronavirus concerns.

Want to Double Your Money? Buying These Stocks Could be a Genius Move
366%