Rumors of the coronavirus's demise have, unfortunately, been very much exaggerated. With the delta variant spreading worldwide, it's clear that the COVID-19 pandemic isn't over.

So the bull run for the stocks of coronavirus vaccine makers probably isn't over either. There's still plenty of upside for companies like Moderna (MRNA 3.15%), Pfizer, (PFE 1.07%), and Johnson & Johnson (JNJ 0.61%), and a handful of new developments should make investors optimistic about their continued strong performance. Let's explore four of these reasons for optimism in detail. 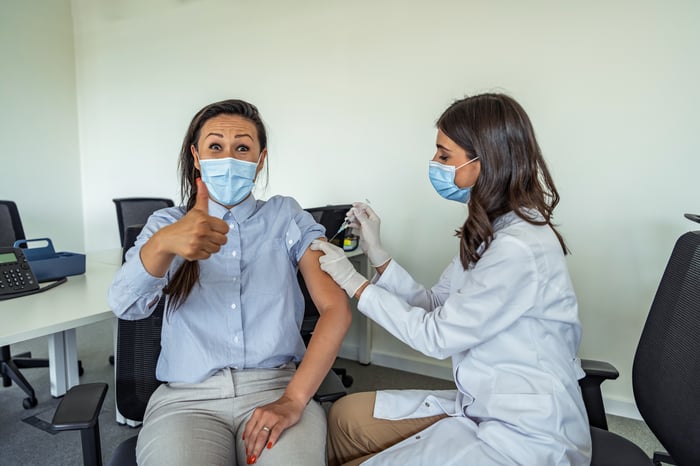 The biggest reason to be optimistic about coronavirus vaccine stocks is that they're eventually going to start registering new revenue from sales of booster shots -- once the companies can prove that additional doses will be safe and beneficial, that is.

While regulators in the U.S. have expressed hesitancy about the merit of giving booster doses to vulnerable individuals, both Moderna and Pfizer have said they believe boosters will be necessary to preserve immunity. And healthcare officials are still evaluating the evidence in favor of boosters, so the story isn't over yet.

Plus, the U.S. isn't the only vaccine market. Israel is already giving vulnerable people additional doses. If others follow, it'll mean even more income for vaccine companies.

Finally, regulators worldwide are currently evaluating whether to conditionally approve the vaccines for younger age groups. Every expansion of the population of eligible people is growth in the total addressable market, and new revenue is sure to come shortly after.

2. Economies of scale in manufacturing are just getting started

As vaccine manufacturing scales further and further upward, the cost to produce a single dose will drop, thereby increasing margins.

For the 2021 fiscal year, Moderna could make up to 1 billion doses. By the end of 2022, it predicts that its output will be up to 3 billion doses. That's a lot of new manufacturing capacity which will need to be built, and it'll make for significant purchasing and production efficiencies as time goes on.

Making doses closer to where they'll be used is also another vector for growing margins, because that cuts distribution costs. Moderna announced on Aug. 10 that it plans to set up a manufacturing plant in Canada. If similar deals are announced in the coming months, they'll be yet another sign that margins are set to rise.

3. Vaccine efficacy is holding up

Despite the ongoing worries about the challenge posed by the delta variant, the coronavirus vaccines still appear to be largely effective at preventing hospitalizations and deaths. And while the jabs from Pfizer and Moderna are more protective than those produced by Johnson & Johnson and others, the bottom line is that having any vaccine is still better than none.

That's critical, as it means the market will remain white-hot, with demand for at least the next year or two. After that, the competitive landscape may shift to emphasize efficacy or cost, but demand won't dry up either way. In the meantime, the competitors with less effective candidates will have plenty of time to reformulate and improve their products. And there's still a chance for latecomers like Novavax to succeed, assuming they can secure regulatory approvals.

So, as dominant as players like Moderna may appear to be, other vaccine stocks could deliver for shareholders too, even if their chances look slim at the moment.

4. Logistics are getting easier and easier

Manufacturing a lot of vaccine doses isn't very useful if they can't be distributed before they spoil. That was a major problem when the vaccines were first getting approved for sale, as it seemed as though several of the candidates would need to be transported and stored in expensive and specialized ultra-cold freezers nearly all the time. Since then, companies have been hard at work developing new formulations and testing new storage conditions to extend the shelf life and temperature tolerance of their vaccines.

Now the Moderna, Pfizer, and Johnson & Johnson vaccines are cleared for storage at refrigerator temperature for up to a month. Ultra-cold freezers are no longer necessary to store doses, though they still enable longer storage times without spoilage. That's a huge logistical burden lifted, and it means that healthcare systems with fewer resources are able to purchase and administer the vaccines.

As a result, many more of the world's healthcare markets are now accessible. That'll pave the way for a higher volume of sales than investors may have expected when the vaccines were first approved. And as a massive bonus, it'll also help to reduce vaccination inequity worldwide.