It's all about change.

Sometimes investing in stocks is simple. Find the best companies and buy shares whenever Wall Street turns negative on them. It can seem counterintuitive. How can the stocks with the best historical performance still produce great future returns? But winners keep winning.

Take Amazon.com (AMZN -1.44%) as an example. The stock has returned 167,900% since its initial public offering and 1,530% just in the past decade -- after many thought its best days were behind it. Despite those gains in the rearview mirror, I just bought shares. New leadership, a transformational business unit, and a fair valuation all point to one of the easiest decisions I've made as an investor. 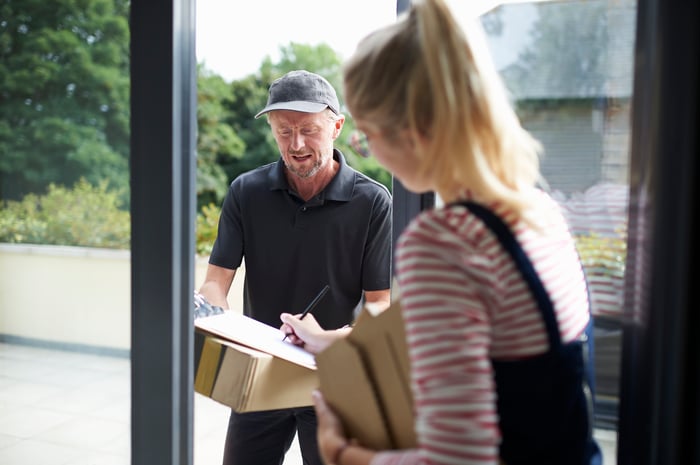 Yes, Jeff Bezos is brilliant. He is the mastermind behind the Amazon we know today. His legend will live long after he departs this earth -- be it by spaceship or other means. But by all accounts, he wasn't the same laser-focused leader in the past couple of years as the man who built the everything store into one of the most celebrated -- and feared -- companies on earth.

Amazon's new CEO, Andy Jassy, has been described as more even-keeled and soft-spoken than Bezos. Despite the personality differences, it has been said his focus on details is truly unique. He joined Amazon shortly after graduating from Harvard Business School and has led Amazon Web Services (AWS) since the cloud computing unit was formed in 2003. He's grown it into more than half of the company's operating profit. AWS has posted $52.7 billion in revenue over the past 12 months.  That would make it the 61st largest company by sales in the U.S. if it were a stand-alone company. That's reason number two.

Understandably, hearing the name Amazon.com elicits visions of frictionless ordering, delivery vans, and brown boxes on your doorstep. But investors know the profit engine of the company is its powerful cloud computing unit. Amazon developed an expertise in operating its massive computer infrastructure thanks to its retail operations and launched AWS as a way to bring that expertise to other companies.

It's completely transformed corporate computing. What used to require massive investment in servers, technical staff and real estate can now be leased from Amazon by the minute. The company has more than 200 services available through its cloud infrastructure like creating and managing databases, analytics, accessing virtual servers, artificial intelligence, and security. A new company can now launch and run their business through AWS at a fraction of what it would have cost during the dotcom boom. Startups like AirBnB, Slack, and Lyft are proof.

That's not to say it's only for small fast-growing companies. Some of its biggest customers are old-school multinational corporations like General Electric, Johnson & Johnson, and Disney's ESPN. In the most recent quarter, Amazon announced Ferrari among its recent deals.

The unit continues to grow. It is opening new regions to increase availability of the AWS services across the globe. In fact, it isn't just growing, it's accelerating. AWS revenue has grown faster in each of the past two quarters. That performance, and what it could mean for the long term, is one of the reasons I'm adding shares now.

The valuation is fair

Like most great companies, Amazon stock has rarely been cheap. Over the years it has only traded below 24 times operating cash flow during times of relative market panic. And those can't be predicted. 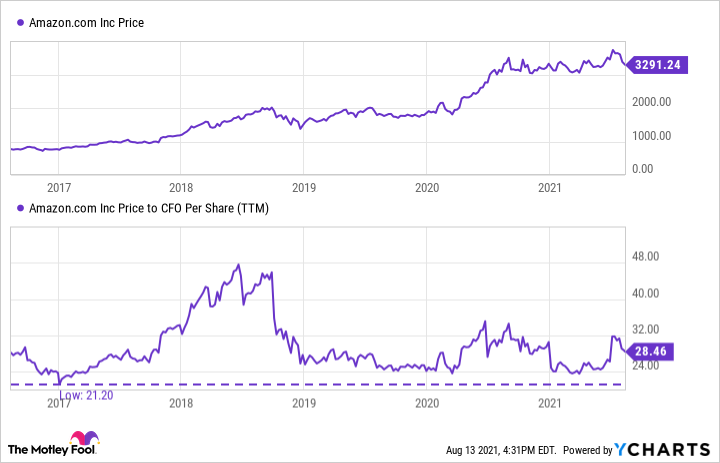 After its second quarter earnings were released, the stock has fallen almost 9%. The company's quarterly sales and forecast fell short of Wall Street's projections. Currently, the average estimate from analysts is for $490.3 billion in revenue for the full year. Despite last quarter's hiccup, the past few years can be used to project the normal rate of operating cash flow.

Using the pre-pandemic 13.7% in 2019 as a guide, the stock's $1.67 trillion market cap is roughly 24.8 times normalized operating cash flow for 2021. That would be right in line with historically good times to buy shares. With the ultra-profitable AWS becoming a larger part of the business, the cash flow as a percentage of revenue is likely to keep climbing in the years ahead. It's just one more reason I was happy to add shares of Amazon to my portfolio.