Please ensure Javascript is enabled for purposes of website accessibility
Log In Help Join The Motley Fool
Free Article
Join Nearly 1 Million Premium Members And Get More In-Depth Stock Guidance and Research
By Will Healy – Aug 16, 2021 at 10:39AM

AMD stock is on fire, but it faces a critical vulnerability.

Once left for dead by investors, Advanced Micro Devices (AMD -3.23%) has become a force in the semiconductor industry. It now holds a technical lead over longtime archrival Intel (INTC -1.41%) and has scored many victories over GPU giant Nvidia (NVDA -1.51%).

Despite its growth, investors should pay closer attention to three reasons to buy more, as well as a critical vulnerability that could undermine the chip stock's success. 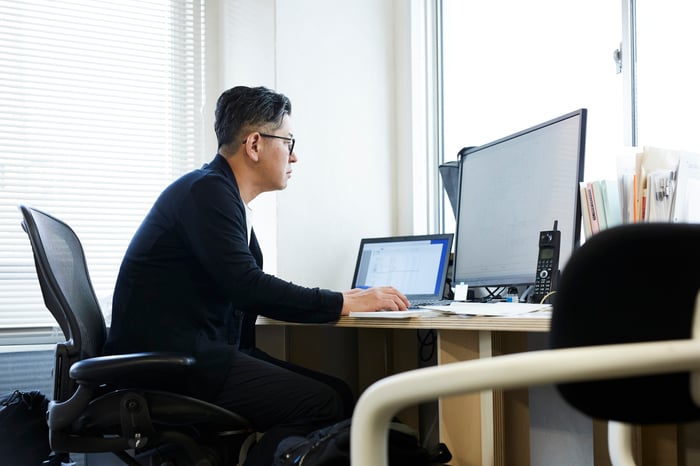 When I say "leadership," I mean CEO Lisa Su. Su took the helm at AMD in 2014 and turned what was a penny stock on the verge of bankruptcy into a semiconductor powerhouse.

Su told CNN that she worked to turn things around by finding the areas where AMD could succeed. The company decided to focus on CPUs and GPUs and sold or closed its remaining businesses.

It then sought to speed up development. Even though the three-to-five-year chip development cycle limited what the company could do, she bought time by speeding up the "tick-tock" cycle developed by Intel. This meant it would improve manufacturing processes and develop new architecture simultaneously.

Over time, tech customers and investors alike began to believe in the comeback story. In 2017, AMD released its first Ryzen desktop and EYPC server processors, and its stock began to rise above penny-stock status.

Intel's struggles in moving beyond the 14 nm chip-making process also helped AMD. By 2018, signs of uncertainty began to appear regarding its 10 nm chip release, issues that linger to this day. It still has not released its Alder Lake 10 nm desktop CPU yet, though some analysts expect it to come out in Q4. In contrast, AMD has marketed 7 nm chips since 2019, and Intel does not expect to release its first 7 nm chip in 2023. Consequently, AMD finally surpassed Intel in the desktop market, claiming a 51% market share, according to PassMark Software.

According to Jon Peddie Research, AMD has not experienced an overall technical advantage against Nvidia, and its GPU market share stands at 19%. However, it has achieved some competitive victories over the GPU giant. Both Sony's PlayStation and Microsoft's Xbox gaming consoles run on AMD chips. AMD GPUs also power Tesla's vehicles.

The financials seem to reflect these technical successes, helping to make AMD a top growth stock to buy right now. For the first six months of 2021, revenue of $7.3 billion surged 96% compared with the first two quarters of 2020. Revenue growth, along with a slower increase in operating expenses, played a role in net income almost quadrupling to just under $1.3 billion. Also, while AMD may not maintain this pace as society reopens, the company still expects 60% overall revenue growth in 2021 compared with the prior year.

Despite these massive increases, AMD's P/E ratio has steadily dropped. Its multiple of 38 is its lowest valuation since Su took over as CEO. It also remains significantly cheaper than Nvidia, whose P/E ratio now approaches 95.

This likely means the stock has failed to price in the company's growth. AMD has only increased by more than 25% over the last 12 months, far behind Nvidia's growth of more than 80% during that time. 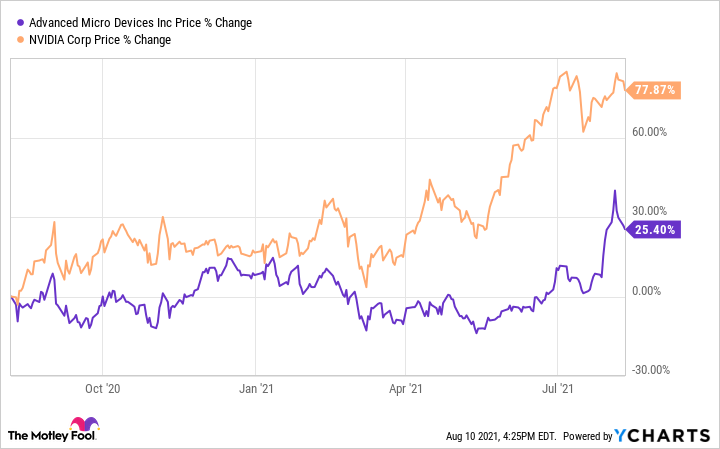 Reasons to sell: It does not own its fabs

However, this is not as negative as its dependence on Taiwan Semiconductor (TSMC). AMD does not own fabs, meaning it depends on TSMC for its production. While TSMC currently holds a technical lead, it is in the geopolitically vulnerable country of Taiwan. Should tensions escalate between Taiwan and China, it could dramatically curtail AMD's output.

Additionally, GlobalFoundries, the company formed after AMD spun off its chip foundries, is now a potential acquisition target of its archrival Intel, according to those familiar with this issue. This possible deal and Intel's existing foundries could potentially offer an added advantage to Intel over time, meaning AMD investors should monitor any related developments.

Lisa Su's leadership has made AMD one of the most influential companies in the chip industry. Moreover, its valuation, especially relative to Nvidia, makes it a great buy despite the lack of control over manufacturing. While investors should consider AMD, they should also keep an eye on Intel and Taiwan-China relations.