Virgin Galactic isn't the only company planning to take customers to space, but it may be the best experience available.

Virgin Galactic (SPCE -0.87%) is completing final test flights for its Unity spacecraft and will begin revenue-generating flights soon, opening an entirely new space tourism industry to the world. When Sir Richard Branson took his flight in July, it created a lot of attention for the company, and Virgin Galactic soon said it was raising the price of tickets to $450,000 apiece and up, a possible indication that demand for tickets is high.

But there have been skeptics who don't believe that Virgin Galactic will succeed financially, especially as competitors begin their own service. Despite the press reactions recently, I think this is a space tourism stock that may redefine how we think about space and experiential tourism, and that's why it continues to be one of my favorite growth stocks. 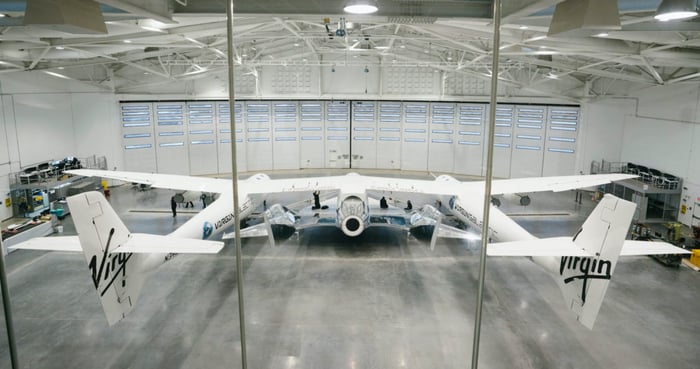 As companies like Virgin Galactic, Blue Origin, and potentially SpaceX start to offer commercial space tourism, I think it's important to think about the experience they're offering from start to finish. Customers are paying $450,000 or more for an experience. It's not just the moments in space, but the full experience, that we should consider as investors, just like a customer would.

Virgin Galactic hired Joe Rohde as its experience architect to plan the three-day experience that will be followed by an early morning flight to space. Rohde spent four decades at Disney Imagineering, serving as the lead designer for Animal Kingdom and working on Pandora-The World of Avatar, among many other projects. He is in charge of the three-day experience leading up to the flight will not only get the crew prepared for the space flight, but also be a vast majority of the experiential and entertainment time that people are paying for. And Rohde has spent decades building great experiences.

The full experience hasn't been outlined yet, but Virgin Galactic describes its three-day training like this:

Pre-flight training will ensure that each astronaut is mentally and physically prepared to savour every second of the spaceflight and fully equipped to fulfil any personal objectives. Our aerospace medical experts will be constantly on hand to offer advice and help, and to check pre-flight fitness. Most of all we aim to make the training and preparation a fun and rewarding experience; a part of the Future Astronaut journey delivered in true Virgin Galactic style.

The company has a custom-built spaceport for these days of training, and it even has a custom Land Rover to transport astronauts to their accommodations nightly.

We also know there's a distinct difference that can be seen in the flight itself. Unlike Blue Origin and SpaceX, Virgin Galactic's mothership takes off horizontally, just like a commercial aircraft. After climbing to about 50,000 feet, the spacecraft is released and the rocket motor is fired, beginning the climb into space. On the return to land, the spacecraft becomes a glider and returns to the spaceport runway just like a commercial aircraft.

The multi-day experience and the familiar take-off and landing could be big selling points for customers looking to drop half a million dollars on a few minutes in space. And it's that full experience that people pay for.

People pay for experiences and exclusivity all the time

It's hard to quantify the value of the "experience" of going to space or the prestige that comes with it, but we can get an idea of how experiences are valued by looking at other items and services that people pay a premium for.

A Ferrari will get you from point A to point B as well as a Kia, but it can cost 10 times as much. Ferrari found 9,119 buyers last year willing to spend over $200,000 for a vehicle, and it has generated a $1 billion profit in the past year as a result. Ferrari is a small, high-cost market just like Virgin Galactic, and it shows there's a big business in exclusive experiences.

Yachts serve very little practical purpose versus other forms of transportation, other than being an exclusive experience; and according to Grand View Research, the yacht charter market was worth $6.5 billion in 2019. The price to charter a yacht can be more than a flight to space, which could make the space experience compelling.

Understanding that people pay a lot of money for experiences is key with Virgin Galactic. With Joe Rohde leading the way, the company is building a complete experience that will put guests in the exclusive company of fewer than 1,000 people who have visited space for any period of time. That's something I think people will pay for, and if you have the money then a $450,000 price tag may not be too high if the full experience is as good as we should expect from Virgin Galactic.

Why Virgin Galactic Stock Is Under Pressure Today
357%